En Masse Entretainemt with Tera celebrates its seven-year anniversary this month, and with it, we have plenty of fun events planned. 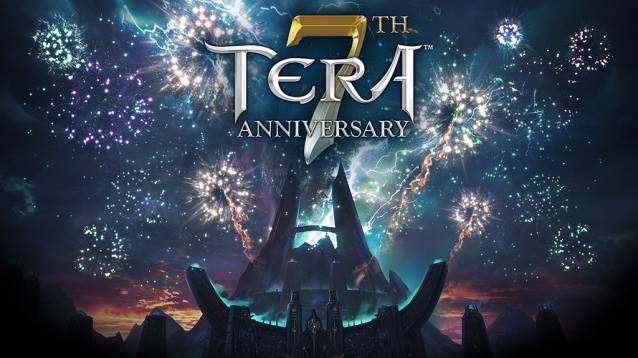 Take a tour across Tera in Search of Roving NPC Spawns

Starting in Val Aureum (Aurum Road and Colossal Ruins) and migrating counter-clockwise across the zones, be on the lookout for Terron Thrall, Terron Saboteur, Terron Thief, and Terron Ringleaders. Federation Scouts believe they'll be roaming TERA daily starting around 1PM pacific, and packing up around 9PM pacific.

Killing one can reward you with Strongbox Keys, On Fire Effect, On Ice Effect, Bling Tokens to purchase Bling Footsteps (Blingling Backpack added after maintenance on Tuesday, May 7th), and consumables.

In addition to the normal double drop and Delver Coins, earn Ground Mounts during Dungeon Highlight.

During the Seventh Anniversary Event, we're giving away archer statues to lucky players! Each and every player has two ways of being selected to receive this rare piece of TERA memorabilia to decorate your game room:

You can also complete Bahaar's Sanctum for a chance to receive one of four Elin Figure Coupons. If luck shines upon you, Bahaar may drop an Elin Figure Coupon when defeated. When that occurs, be sure to pick it up immediately! This will guarantee you a real life elin archer statue—no raffle involved!


DISCLAIMER: Only players in the United States, Canada, Mexico, and the European Union are eligible to win the prizes. Winners agree to be responsible for any applicable taxes and duties. Standard TERA contest rules apply.