Stronghold Siege is the new guild vs guild PvP feature in Neverwinter, and it's now available. This new gameplay mode pits 20 players against other 20 players, a mass-scale PvP MOBA-like battle.

Siege is created by combining two strongholds maps (connected along a central river), creating a three-lane battlefield where players must siege and destroy the enemy's guild hall. The structures on the map are the same as those the guilds have built on their own stronghold maps. 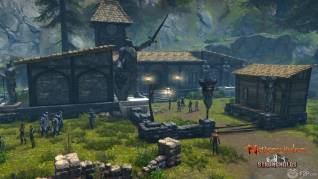 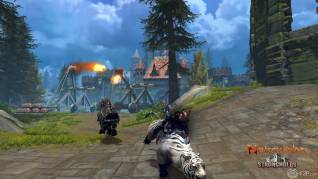 Each lane on the battlefield has two supply depots. Each guild begins in control of the supply depots on its side of the river. The depots are filled halfway with supplies at match start, and more supplies can be added. As the depots fill, they spawn Quartermasters to guard them and Guard Captains that travel up the lanes and attack into enemy territory. Like in a regular MOBA game.

When a team captures both supply depots in a lane, it gains control of the lane, which makes the siege point at the end of the lane. Then, players can use supplies to build catapults and ammunition and lay siege.

Whether you are a MOBA fan or not, we are sure you'll love this new game mode. Let us know what you think about it once you test it!