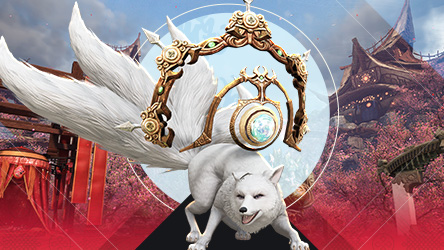 For the past few weeks, hundreds of thousands of players from across the world have immersed themselves in the stunning world of Swords of Legends Online—the AAA massively multiplayer online role-playing game from publisher Gameforge and developers Wangyuan Shengtang & Aurogon. True friendships have formed, powerful skills have been acquired, and now it’s time to put them to the biggest test yet, as Gameforge reveals a massive new raid for legendary heroes to conquer! Packed to the brim with ferocious bosses that only a battalion of 10 to 20 players can overcome, adventure awaits the bold in the Xuanjiu Jade Palace raid!

In the inner courtyard of the Vixen Yuzao’s lair, the flowers bloom and the brook’s waters flow crystal clear, as though spring will never end. Recently, a band of immortals was sighted in the area, awakening the attention of its inhabitants...

Since the Xuanjiu Jade Palace is a formidable challenge, only players who have already proven their skills in the hard dungeons and upgraded all their equipment to item level 60 should dare to take on the challenging bosses of this brand-new raid.

Every week players will be able to earn high-quality loot (gear level 75+) for each boss, among other goodies such as collectibles, parchments, gemstones, and more!

The raid’s normal difficulty will be available immediately after the weekly server maintenance on July 29 and can be accessed by players once a week. The Xuanjiu Jade Palace will be reset every Thursday at 6 AM (server time).

Shi Dao and Vixen Yuzao: Vixen Yuzao trained for countless years using the cold of the Taiyi Ice Crystals. When she eventually assumed human form, her skin was as white as snow. Shi Dao originally set out with the intention of capturing Yuzao, for her having thrown the Zhongnan Mountains into chaos. But he lost the battle and was instead himself captured by Yuzao. Over time, he learned that the Vixen wasn’t as evil as he once thought, and gradually fell in love with her.

Watch out for Shi Dao’s deadly sword attacks that not only cause damage over time but also throw players into the air for a short period. His talismans are also used to slow players down or engulf them in devastating explosions!

Vixen Yuzao makes fearsome use of her Soul Fire to burn players and cause explosions. Her tail attacks can also knock players unconscious. Left unchecked, she also releases Rosemary with a healing effect on her surroundings, which can have an empowering effect on her beloved Shi Dao, granting him additional strength.

Undead Daoist: A member of the Silver Scorpion Envoy’s escort, the Undead Daoist followed him into the Han Ice Cave to mine Taiyi Ice Crystals. Having learned to combine fire magic with the spells of the Devastators, his skills have improved enormously.

Awakener Silver Scorpion Envoy: The Envoy came to the Han Ice Cave to mine Taiyi Ice Crystals for forging swords. He worships the God of the Devastators and commands a variety of dark qi spells.

Utilizing dark qi, this boss can stack a powerful Confusion debuff that after reaching 10 will cause players to take damage over time in worship of the God of the Devastators. Aided by his followers, the Silver Scorpion Envoy can summon them to attack players while he unleashes powerful spell and arrow attacks and teleports around the area.

Fei Chi: Changli’s main guard, Fei Chi was born with incredible strength and is a competent fighter. He was once held in high esteem by Meijia, but not being the sharpest tool in the shed, he was very often unable to understand her orders. For this reason, Meijia sent him to the Xuanjiu Jade Palace to help Changli mine Taiyi Ice Crystals.

In addition to several powerful AoE attacks, Fei Chi also punishes players with his Heavy Hammer attacks, which if landed, can stun them after three stacks or enrage the boss if he misses, placing the party at high risk of wiping. After becoming enraged three times, Fei Chi unleashes his rage, causing massive damage. His Thunderbolt can throw stunned players into the air, causing them to take additional damage upon landing, but the damage can be shared by group members.

Fei Chi can also raise his weapon to summon Angry Water. This attack throws all targets into the air with a powerful blast of water. When they fall to the ground, they deal AoE damage in their proximity.

Changli: The Demon Master loves the finer pleasures of life and is a close confidante of Meijia. He shows the greatest respect for her, always willing to fight in her name. Now he is a general in her demon army, where he promises to be a formidable opponent to anyone foolish enough to stand in their way.

Equipped with powerful weapons, Changli’s melee and ranged attacks pack serious burst damage and can inflict damage over time with the Dirty Blade debuff. He can target players from a distance, or knock them unconscious as he drags them towards him with his deadly axes. If Changli is feeling overwhelmed, he quickly summons his Guards to defend him.

Dahan: After being defeated by the immortal, Dahan was determined to become more powerful. Recklessly, he drank from the bloodwine brewed by Changli, a beverage distilled from human blood and the essence of fox spirits. Corrupted by its effects, Dahan is now more brutal and bloodthirsty than ever.

The final encounter of this raid culminates in players challenging Dahan in his corrupted form, while enduring a barrage of demonic attacks. In his Raptured Demon state, Dahan will unleash flurries of demonic energy along with Water of Demon Power, which inflicts damage over time and can kill players if exposed to it for too long.

But that’s not all—even more content comes to the world of Shenzhou in an exciting Summer Event! From July 22 through September 2, players from Beginner level 18 can experience all-new quests and earn fantastic rewards, including useful in-game items, some stylish summer beachwear for all, special breezy cosmetic items for Battle Pass holders, and more.

It’s beach season in Shenzhou, and that means party time! After accepting the quest from Guamiao in Cloudrise, head through the portal to Dragon Turtle Island to join in on the daily quests and activities available throughout the event. Need a break from questing? Youyou on Dragon Turtle Island has players covered with a fun chilled activity played alone, in pairs, or (for players level 40+) in a team as they try to run through cooling spheres to collect as many points as possible!

Players will receive points for completed tasks, with some activities granting more than others. Up to 10 points a day may be earned. Once enough points have been accumulated to reach the next milestone, the rewards can be claimed.

Players can also send Premium Passes to their friends and invite them to the Summer Event using the gift function in the shop. Any progress made on the “For Everyone” milestones is taken into account when players purchase a Premium Pass, so they can still receive their Premium rewards even if they initially collected points in the free area only.

The fun keeps on coming all summer long, with tons of activities for all! From August 5 through 19, unleash your inner pirate and take part in the “Buried Treasure” event. And it isn’t sunny season without that iconic summer treat—Watermelons! Find them around the world from July 22 through September 2.

For more information about the Xuanjiu Jade Palace raid, the summer events, and the Battle Pass, check out the VOD of the latest SOLO team livestream here:

For more information on the Battle Pass and Summer Event.

You can also find additional information by visiting the SOLO page