Rage War The Good & The Bad

Rage War The Good & The Bad

Rage War is a free to play city building strategy game where players are thrown back in time after a time travel incident gone wrong, finding themselves in the Stone Age they must rebuild and survive. Train up an army to battle against challenging AI enemies or real world players in PVP.

Let’s take a look to see the best and worst of this tactical MMO.

Multiple Game Modes - The game offers a combination of RPG, city building, PVE and PVP combat strategy and tower defense; it provides a little something for everyone and covers a wide selection of MMO genres

Hands On Strategic Combat - Players need to train up their units, choose which to send into battle, and then position them on a raid based on the opponents structure and unit defenses, which requires experience and tactics

Challenging Gameplay - With the various options in place for assembling an army and making an attack, players need to think carefully as the difficult AI and experienced players make combat quite challenging at times

The Tech Tree - As well as there being dozens of tech to choose, the layout of the tree itself doesn't force players into too many specific routes and instead leaves it open to player choice with their preferred path

Awesome Cinematic - Lots of care and attention went into the opening movie cinematic with the game's leading character Deonardo Li Vinci and his first time machine experiments; it creates an exciting tone to the game

Poor Graphics - The game looks quite dated with the graphics not looking the best, even for a browser game; animations in the settlement show units moving around but clipping through buildings and terrain

Tech Tree Lacks Info - Whilst there's lots of diversity with the tech tree allowing players customize their settlement, when clicking on later techs there is a very limited amountof information given

Pay To Win - The Pay to Win element is pretty strong, with the ability to purchase most things in the game with premium Gems currency (resources, techs points, building rushing, heals, shields, etc.) there are also some elements such as buying additional Troop slots that can only be done with Gems

Era Strength - It's impossible to defend against veteran players that are already in later eras, attacks from these more advanced settlements results in lower players constantly being crushed and unable to develop, which is very off-putting for new players

Advancement Plateau - The game begins at a very good pace, giving players a lot to do, but very soon the game plateaus due to build timers, injured troops and long time limits for tech advancement and it feels like you spend a lot of time waiting around to do stuff 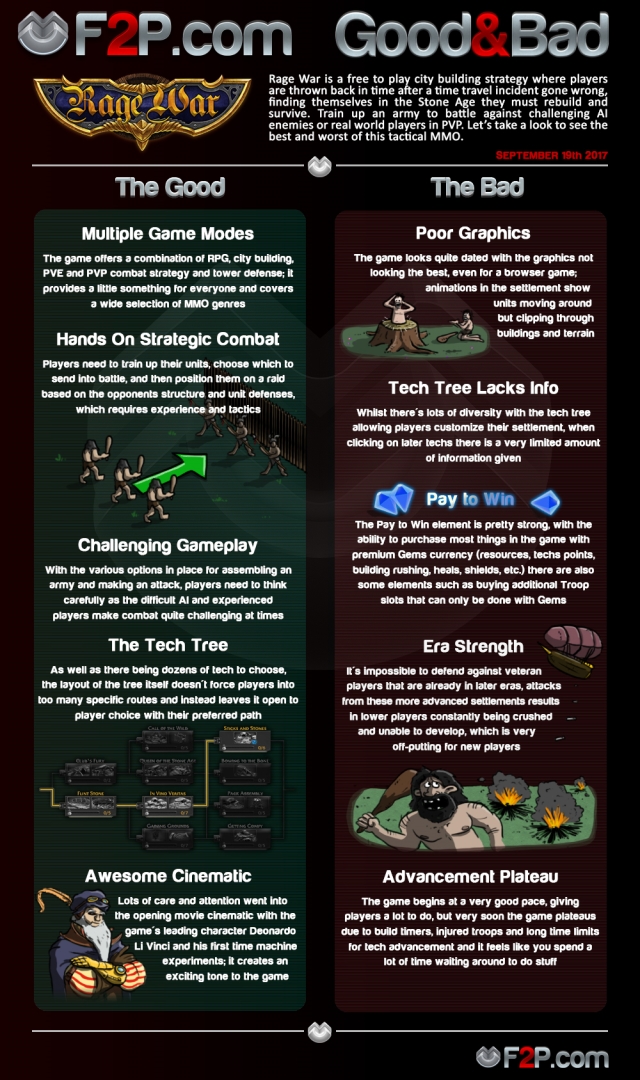