R2 Games is getting in on the Thanksgiving festivities this year with a huge giveaway event covering most of the games on its popular web-based gaming platform.

Between the 24th and the 26th of November you’ll be able to nab free gift codes and the chance to get all of the free Premium games on the platform at once. It’s a Thanksgiving miracle.

In case you’re not clear on exactly how exciting this offer is, let us fill you in on the rich seam of gaming goodness that R2 Games has to offer.

Unlike most browser gaming platforms, which traffic is ultra-casual, bargain basement titles designed to waste a bit of time at the office and nothing more, R2 Games is packed with established gaming franchises and high quality experiences.

For instance, the platform lets you play Game of Thrones: Winter is Coming, the absolutely superb strategy MMO featuring characters and situations from the beloved fantasy franchise. It contains likenesses of Jon Snow, Jaime Lannister, Arya Stark, and pretty much the whole memorable cast.

Licensed by Warner Bros from HBO, Game of Thrones: Winter is Coming sees you playing as a lord or lady of Westeros, attempting to expand your influence and consolidate your power by training soldiers, recruiting heroes, and forming alliances with other players.

Oh, and it lets you have your own dragon, which you raise from a hatchling into a huge, deadly, airborne weapon of war.

Then there’s Pokemon Mega, an awesome turn-based RPG spinoff of the world-conquering franchise in which you put your Pokemon through mega evolutions, giving them new powers and abilities.

And that’s not all. R2 Games is packed with great games, like The Third Age, Dragon Awaken, Eternal Fury, Knights of Fantasy, and tons more (see all the games on the end of the post).

For the next couple of days, you can check in every day on a game by game basis to claim free gift codes, play a slot machine daily (or twice daily if you share the page on Facebook) to win premium games at random, and take advantage of a buy-one-get-one free offer on all premium titles. 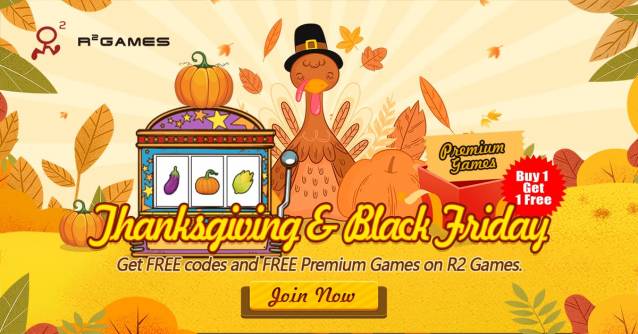