About PvP in Skyforge

PvP is one of the most important features in a MMO, you know it, we know it. And precisely because of that, we wanted to know how it will work in Skyforge, one of the most interesting upcoming titles in the foreseeable future. My.com has given us some very interesting information that now we share with you.

First of all, Skyforge's PvP can be divided into two groups: Phanteon Wars (large-scale guild fights; PvPvE battles) and Battlegrounds (solo or small groups). In this article we'll only refer to the second. Phanteon Wars will be covered in a future article. So, let's get dirty.

Let's begin by saying that PvP in Skyforge tries to make fights fair. Players are only able to fight other players in designated areas, which means that it will be almost impossible to gank someone. This won't please everybody, but developers really seek fair fights. Nevertheless, there are enough pvp game modes for all of us. You'll see. 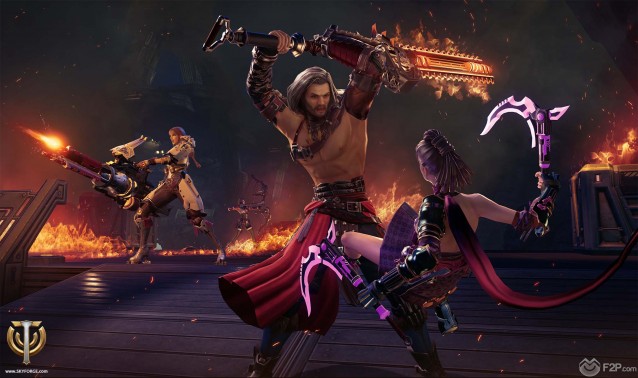 Players can reach PvP locations in one of two ways: by using the Divine Observatory or an Uplink Terminal and selecting the Battles tab in the list of adventures. Some maps will be available to everyone from the start but access to some locations will require you to gain additional Prestige. In addition to being used to unlock some types of PvP content, the matching system takes both the player’s skill and their Prestige into account.

To master PvP in Skyforge you will need to be well aware of the combat roles and strengths and weaknesses of different classes, be capable of controlling and directing the fight and be prepared to face someone as skillful as you. You might also consider finding a good team for some locations, so you can devise a strategy and establish a set of tactical maneuvers. However, it’s not a requirement. If you enter a PvP location alone, the system will pick a team for you.

Rewards for PvP in Skyforge are similar to the rewards you receive for completing quests. In addition, the most active PvP players will be rewarded with exclusive equipment and additional perks, which give advantages in PvP battles. Besides the material gains there is also recognition and acclaim: the best fighters will make it to the top of Skyforge PvP rankings. As there is a single server per region making the competition for the top positions fierce.

Now let's take a look at the maps and talk about the different game modes from the beta. Have in mind that this list will surely expand over time.

- Free for All (FFA).
6 solo players. In this mode, victory goes to the first player to kill 10 opponents. The most important feature of this mode is that the kill goes to the player who lands the killing blow.

- Team Deathmatch (TDM)
6 players, 2 teams. This mode is all about team combat. Two teams of three (formed in advance or picked randomly by matchmaking) will fight. Victory goes to the team that wins in fight rounds and sends all opponents to the ress. point.

- Control Points (CP)
16 players, 2 teams. This mode will be played in a two-level stadium. There are control points on the map that players must capture to gain points. The more control points your team controls, the faster you receive points.

- Payload (PL)
16 players, 2 teams. In this mode one team must get the movable cargo to its destination and the other must stop them. If the cargo makes it to the checkpoint before the time runs out, the first team wins. Cargo only moves if there is at least one player from the attacking team next to it, otherwise it moves backwards.

- Capture the Flag (CTF)
24 players, 2 teams. A huge maps with an apparently simple task: to capture and carry the enemy flag to your home base. Map will feature several ways to get to the enemy base.

This is all for now regarding battlegrounds. Soon enough we'll have more info about the Phanteon Wars, so stay tuned. And remember that if you want to know more about Skyforge, you can do so by clicking on the info button below.