What is the main source of inspiration for the characters of Panzar?

Our inspiration comes from the world of fantasy, which all starts back in Ancient Greece. That’s is The Illiade and Odessey, Theogoniya by Gesioda, Biblioteka by Pseudo Apollodora, Mythes by Gigina, Metamorphosis by Ovidia and Deyana Dionisos by Nonna.

And then we have Tolkien, our modern inspiration. Everything after that is, in my opinion, basically a remake, originating from these works. 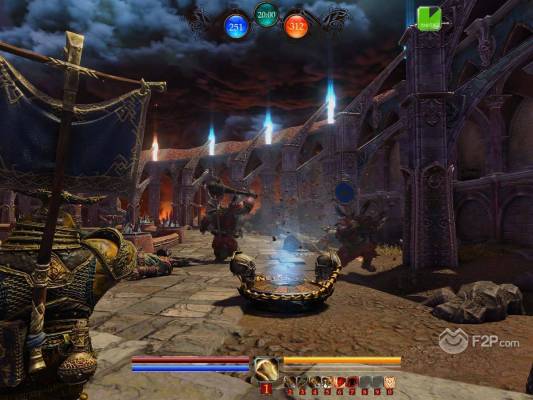 How many people were involved and how long did it take to create the characters?

When we were making each character, we asked outselves 4 questions:

The time we needed to develop each character was directly influenced by his level of difficulty. One would maybe take us a day to think up. Then we could spend a whole week on another one. On average, there were about 3 to 4 people working on each character.

I draw up the sketches myself, and always on paper. And that’s the way it should be. No one should ever start the sketching process using a computer, too many are using templates now - the templates are being used by everybody. The character needs to be original, and to do so, it needs to come alive on a clean sheet of paper, where you can lay out exactly what you have in your head. 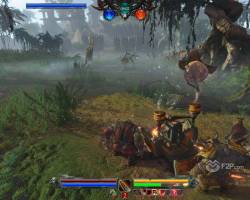 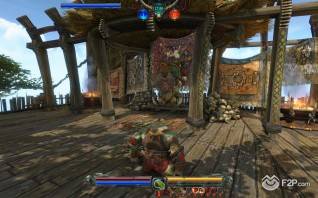 Which character was the most enjoyable to form and why?

That’s a hard one. Every character has its own personality and charisma. For example:

The Orc is inspired by the ape species, even gorilla likeness. His whole essence was built on this fundamental element.

The Dwarf is the half-mad engineer who is obsessed with buidling machines of all sorts.

The Human, in the battle structure, is closer to the Asian world in the sense that we (in our our more recent changes) brought his appearance closer to that of a Mongol warrior or a Samurai.

The Elf is one of the most controversial figures in our world. At the beginning, we designed them with dark skin, imagining them more Mayan-like or from an African tribe. But the public didn’t really take to them, so we made some modifications; and now they are as in the game.

Can you give us a brief background story for each of the characters?

Well, one of our main examples was the early Team Fortress, where every character has its own charisma. One look would suffice to tell what it’s strengths were, a bit like: ‘Oh look, I bet this one is clumsy and slow but really strong, and so on. In that sense, we have worked on giving every character in the game, its own unique features:

Tank:
Tanks are members of an ancient Orc clan. They are often compared to machines of war, and thanks to their heavy-duty armour, they indeed look like moving fortresses. Not even the fiercest attack would stop a wall of Tanks.
Like Berserkers, Tanks worship Zar, the God of War, who endows them with unique magical powers. Tanks can conjure up a magic shield in battle that will protect their allies from ranged attacks, enabling them to occupy the most advantageous positions on the battlefield.
But, unlike Berserkers, Tanks are beasts of defence and respond well to tactical play rather than just brute force and sheer speed. They wield their shields skillfully, absorbing a great deal of incoming damage. In their advanced stages, they can even use their shield as a weapon.

Berserker
Berserkers are the fiercest of the Orcs. Zar, the God of War, blessed them with phenomenal strength and endurance. They are utterly fearless, natural born fighters.
Thanks to their physical prowess, Berserkers are the main strike force of any army. They wield their two-handed clubs with ease, paving the way for their teammates. Their clubs have a wide damage radius, allowing them to hit multiple targets in one sweep, making them irreplacably effective in battle.
However, while Berserkers deal an incredible amount of damage, they also take vast amounts of damage because they are always in close combat. This is why there are healers, whose work allows them to enter a pain-numbing trance.

Sapper
Dwarves have spent centuries honing the art and science of engineering. Over the years, they split into two separate engineering schools: the Technicians and Sappers. Sappers specialize in sabotaging enemy camps using their small nimble frame to slip behind enemy lines and foul the outcome for their foes.
Sappers also set up teleporters, whipping their allies in an instant to key points, all the while deploying a broad arsenal of mines to secure conquered territory against enemy attack. When crafting their ingenious devices, Sappers use large two-handed hammers that can also be used in melee combat.
The Dwarves have been under the protection of Kromm, the God of Knowledge, for longer than memory serves the world they live in. It was Kromm who gave them with their remarkable technical skills, compensating for their small size and little strength with their miraculous war machines. It is under the heavy vaults of stone labyrinths that they get their work done. Ore is collected, then converted into steel, and this then into weapons and vehicles.
The most skilful Sappers are capable of drawing on Kromm’s energy by erecting special totems on the battlefield. It is this ability that has made it possible for the Dwarves to leave their underground shelters and face the enemy with the support of divine might.

Gunner
After Kromm, the God of Knowledge, gave Dwarves their exceptional intellectual capacities, they gradually worked their way to the surface. Dwarves have become masters of combat engineering, and while they do not possess the magical talents of Elves or the exceptional physical might of the Orcs, their technical prowess make them a formidable force on the battlefield.
Gunners make weapons and traps that are indispensable to the defence of strategic points, and use their rapid-firing cannons to claim tactical advantage by sending a barrage of bullets in direction of the battle.

Paladin
Since ancient times, humanity has been renowned for its combat healers. The strongest and bravest soldiers become adepts of the Order of Paladins, where they are initiated into the mysteries of life and death. The doctrine of the Order finds its faith in the goddess Chimaera – the symbol of evolution and living organic development.
Paladins master the magic of Life. They heal their wounded allies and remove curses. Experienced Paladins can resurrect fallen warriors - as long as their souls remain within their bodies, that is. Paladins mix magical powders from ancient herbal recipes to save themselves and their allies in battle. Their powders spread auras that enhance their allies’ physical and spiritual capabilities.
Paladins are unrivalled healers, and, thanks to rigorous physical training, deadly melee fighters. Paladins in their role as combat medic, are never far from the front line, ready to give life as much as take it away.

Inquisitor
Inquisitors are the most gifted killers among Humans. Having honed their skills in thousands of battles, they can spot a weakened opponent from a distance, rushing in to finish them off with a fatal stab to the back. Once they catch the scent of blood, Inquisitors are seized with righteous rage, ripping through their enemies with their double blades..
In return for their loyal service to Chimaera, the Inquisitors have been granted the ability to infect their foes with a deadly plague capable of wiping out entire armies and instantly turning the battle in their team's favour.
The Inquisitors believe that only the flames of the Sacred Fire can cleanse the world of evil. They live for endless carnage, leaving nothing in their wake but scorched earth and the bones of their fallen foes.

Sister of Fire
The Elves are the eldest race born of Chaos. Under the auspices of Argus the Elementalist, they have mastered the energy of Chaos. However, according to tradition, only female Elves can control the mysteries of battle magic. Even then, only the most talented elven females are selected for training, after which they devote their lives to the service of their chosen House. Over the centuries, the Elven magic has become divided into two powerful and influential Houses.
The House of Fire raises Sisters of Fire who become masters of destruction magic. Once initiated, Sisters of Fire develop incredible offensive powers and specialize in areaattack spell-casting. By setting the ground ablaze, Sisters of Fire can force even the staunchest warriors to retreat.
Due to their delicate constitution, Sisters of Fire cannot wear heavy armour, and their effectiveness in combat relies heavily on their ability to remain just out of reach of the enemy.

Ice Witch
Unlike the impulsive disciples of the House of Fire, the followers of the House of Water are renowned for their calm and restraint. This is why the foundation of water magic is ice magic.
Frost Witches provide excellent support, but they cannot take the enemy on single-handed. Their physical weakness and inability to wear heavy armour or defend themselves with destruction magic makes them a tempting target. However, the outcome of a battle can be resolved through the power of ice if it is used at a crucial moment.
Once they have acquired sufficient arcane knowledge and experience in battle, Frost Witches can easily rival the Sisters of Fire.
By gracefully dodging attacks and draining the enemy’s magical powers, they are capable of rushing behind the enemy lines and putting down all those who fail to protect themselves against the piercing cold and biting wind they wield.
After several conflicts between the Frost Witches and their fiery counterparts, the Matriarch of the House of Water created a spell to protect Witches against fireballs. When these two houses meet in battle, it gets explosive. 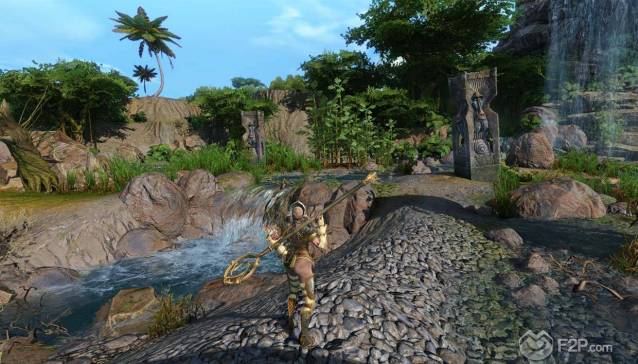 What techniques and programs do you use to create character models?

We use ZBrush and 3d max.

Were there any obstacles that you faced during creation, and if yes, how have these been overcome?

The main difficulty we faced was uploading everything to the game client. Every character has about 100 items. That’s a lot of uploading. We spent a lot of energy optimizing the gameplay, but we eventually got it pegged

What's the best piece of advice you could give to aspiring gaming artists?

You have to be a true artist. Go to Arts School and get the best education you can find, and always lay out on paper first, so you can get it down with being influenced by anything. Draw everything yourself and by hand, and that’s how you will create truly unique characters.

Will there be any new characters added to Panzar in the future?!

For the moment, we don’t plan to expand our character base on PvP mode. It messes with game balance and right now, we have set our sights of cybersports, so we really don’t want to compromise that. But we are also bringing out PvE, and that might be where to look for new Panzar characters and maps.