As many of you probably already know, Tyranny of Dragons, the latest Neverwinter's expansion, hit the live servers about a month ago, bringing into the popular free-to-play action MMORPG a lot of new features including the long awaited brand new playable class: The Scourge Warlock. This new class is a magic user who manipulates dark magic and soul powers to destroy his enemies and support his allies.

Being curious as always, we jumped into the game to have a hands-on with the new class and bring you our first-hand impressions. Ready? Let’s start from the beginning then…

The Scourge Warlock features several unique mechanics and sub-mechanics which make it a very interesting and tricky class to play. You can’t just sit in front of your target trading blows with it, nor can you have a standard “rotation” which is effective in any situation. Instead, you have to think very carefully about which skill to launch first and which to launch later, because they interact with each other so well and have so many different effects that you often have to improvise and adapt your tactics in order to trigger a certain effect or another.

Your at-will skills, bound to your left and right mouse button by default, are Eldritch Blast and Dark Aura. The first is your basic attack and bread ‘n butter combo, and will launch 3 eldritch flame globes against your enemy from a reasonable range, with the 3rd hit that inflicts splash damage to the enemies near to the target. Dark aura is the first of the warlocks’ unique mechanics: if you use the skill while aiming at an enemy it will generate a globe of energy – called dark spiral - which starts to float around you and will stay with you until you use it. Clicking the right mouse button while you have one or more dark spirals around you will launch the dark spiral against your target inflicting a high amount of damage and earning more action points. Moreover, when you inflict a killing blow, you will generate another dark spiral, and there are even other ways to generate them with other skills, for example killing a cursed enemy, so managing your Dark Spirals is an important factor while playing this class as they represent a nice source of DPS.

Another interesting mechanic is represented by the curses. As a warlock you can instantly put a curse on your enemy by clicking tab. That enemy will suffer from a 20% increase on received damage. You can put up to 3 curses on your target but the damage bonus will be split between them. This is important because many skills interact with curses and trigger various useful effects; e.g. The Vampire Embrace, a power which steals life from your enemies inflicting damage on them and healing yourself, which will be way more effective on a cursed target and will give you a temporary boost to hit points but will spend the curse, or as we said before, killing a cursed enemy with Dark Aura will reward you with another Dark Spiral.

The other interesting Scourge Warlock mechanic is the Soul Puppet. The first power you get, Killing Flames, is a simple high damage attack; however, if you kill an enemy with it, it will spawn a Soul Puppet, a sort of floating ghost which stays at your side for 120 seconds or until it lands 5 attacks. If you manage to land another killing blow with the skill, your Soul Puppet will have its damage increased by 20%. There are also other ways to spawn your Soul Puppet, and one of the class’s paragon path, damnation, is heavily focused on making your Soul Puppets a lethal weapon and a reliable addition to your party. 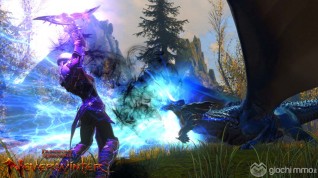 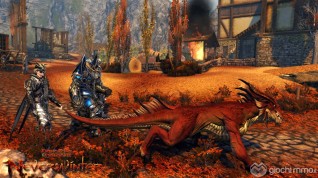 The other power that we tried during our test, Infernal Sphere, is more common, but no less powerful or fun. Upon casting it creates a variable number of green and black flaming spheres (more sphere for less HP, up to 4 or 5 sphere, I can’t remember the exact number) which floats around you and automatically attack the enemy when you are in a fight.

As you can see, even if we managed to reach only level 11 during our test, we had the chance to try a very nice selection of interesting skills for this class; and you know what? It’s really fun. A lot of magic classes in MMOs have a very slow start, with few skills that don’t differentiate too much from each other. The Scourge Warlock has been a blast to play with its intriguing mechanics that interact with each other. You can create amazing combos and pull off a ridiculous amount of damage if you know what you are doing, but you need to use your brain and your coordination, and avoid spamming random skills or you will get killed in no time. You need to know how and when to summon your Soul Puppet and what to do if it disappear at the wrong time. 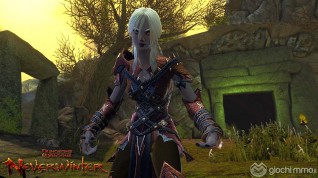 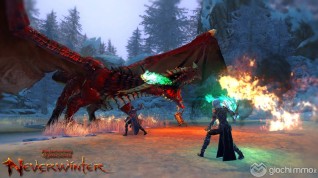 Graphics wise the new class is a joy to watch, with the mix of purple dark spirals and infernal spheres floating around you, the ghostly Soul Puppet at your side and your shadowy rays from Vampiric Embrace and Eldritch Blast. Moreover, the Warlock dodge/moving animation it’s like a glide on shadow trails, very cool.

Developers made a very nice job and delivered a class which is extremely well made, polished and excellent in both graphics/animations and mechanics. It’s fun to watch, it’s fun to play and you should definitely give it a try.

If you want to know more about Neverwinter, click on the "info" button below.