Great graphics for this type of game and the relative interesting take on the Greek Mythology setting.

Doesn’t really offer anything new that we’ve not already see in dozens of other games of this type. The music score, whilst sounding great, was very short lived and left us in silence a lot of the time.

We recently took some time out to check out one of the newest games from R2 Games, Mythborne, a free to play hero/team building fantasy MMORPG that falls in a similar vein to their other titles such as Wartune, League of Angels, Knight’s Fable; the company has a style of game they like to stick to and, given the success of these games, we can understand why.

From the get go will openly say that the really aren’t the type of games that I, the reviewer, like to play due to the sheer amount of automated content that you typically find in them. However, in comparison to their counterparts and other games in the genre we have to say that it definitely had its finer points and stood out for a number of reasons.

Taking our first steps into the game after the simple registration we were greeted with a character creation screen that was essentially choose whether you wish to be a male or female as well as choosing your name. And there is absolutely no character customisation whatsoever in the game and your character looks the same as everyone else’s, though these games aren’t exactly known for their role-playing community so probably isn’t that big a deal.

Game modes up simple enough and our first impression was that graphically the game loot pretty impressive for an isometric top-down RPG, the character models and landscape/environments are beautifully designed and loot like works of art and so that we have to commend the designers as it really does look enchanting. Aside from that the game is pretty much a staple to what we have come to expect of the genre, we move automatically from NPC to NPC, typically clicking the Next button skipping of the dialogue (to like these sort of games you probably want to read story behind them because the actual content only really comes into play at much later levels) and picking up one quest after another that leads us into one battle or another. Literally taking a few steps into the world we were asked which class we wanted to play as part of the story, can of pointless and we have no idea why they didn’t just adopted into the character creation portion, but whatever. 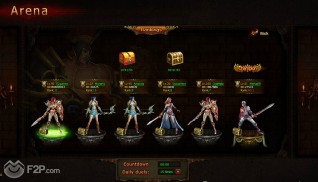 The game revolves around a loose version of Greek mythology with a variety of famous names popping up, from Medusa, Hercules, Poseidon and of course Zeus with some loose story where as ever you are the only saviour of the world, something common in these games where the story is geared towards the individual player and the content is more in line of a single player game. As we went from quest NPC to quest NPC, and back again, skipping from one battle to the next we were inundated with XP and levels and by the end of our 20 minutes play through we’d already hit level 20 with barely breaking a sweat. Features are unlocked as you progress, more of a slow progression way to introduce new systems as you level up, including how to recruit new Heroes into your party (which will help mitigate your own classes’ shortfalls).

Combat held up slightly differently to other games of this type, though still felt like an unchallenging one-sided ass kicking as we dropped enemies with relative ease. The war inspired difference with the game is at the combat wasn’t completely automated, in so far as your own play character, and we had a variety of skill powers that we were able to perform during the battle, as a mage we had to build up “rage” with our primary attacks to them launch more powerful strikes (though we didn’t check out the other classes I imagine that this “rage” feature works exactly savour them, as it did seem quite inappropriate as a mage to be building up “rage” as opposed to the traditional mana).

All in all a lot of what we’ve received before and have come to expect from these types of MMORPGs, definitely more enhanced and updated and definitely does look great, but doesn’t particularly at anything wildly different in many of the features are just slightly modified or renamed from the companies’ other titles and keep the same core gameplay.

If you want to know more about Mythborne, click on the "info" button below.