Female only characters, paywalls very early on, graphics quite dated.

We stepped into the world of Jorvik to try out horse riding themed MMORPG Star Stable (as a male in their 30s it is nice to have such perks of the job where I get to play such games), aside from the fact that the game absolutely isn’t marketed towards us we have put on our professional journalist hat to give you an unbiased review of the game.

The general theme of the game is that you take on the role of a little girl going to pony camp over the summer (yes, you can only play as a girl), during this time you are manipulated by the owner of the summer camp into trying to hinder the development of a working self-made businessman (who is no doubt trying to just put food on his families’ table) by trespassing on his property, tampering with equipment and putting yourself and his employees in constant danger (whilst the stable/camp owner just plods around the stables all day sending his army of children out to do his bidding). 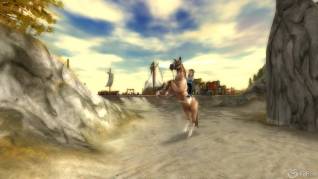 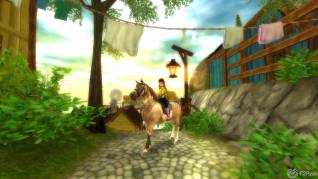 Okay, so that might be a slightly skewed representation of what the developers had in mind; the property magnate (Mr Kembell) is trying to take over the summer camp to build some type of property development scheme on there, which the camp owner apparently owns rights to the land. Mr Kembell looks pretty menacing, wears a suit, talks about money all the time and laughs a lot; clearly a villain. That still doesn’t change the fact that Moorland has no problem sending kids onto a building site to turn off power and stuff like that (whilst on their ponies!!!), it is just a negligence lawsuit waiting to happen.

Back at camp things are a little more realistic, you get your own pony for the stay (we named him Greyjoy) and get to pick up a variety of quests around the place, helping people find missing items, learning how to tend to your pony by brushing, feeding and watering them. We get to meet a variety of characters including Loretta, an absolute stuck up, prissy little rich bitch and “leader” of the Wild Bobcats Club, who obviously takes an instant dislike to you and then you’re supposed to try and prove your worth so that you can become one of them. Personally I would have preferred to cut her saddle strap when she went for a ride and had a little “accident”. 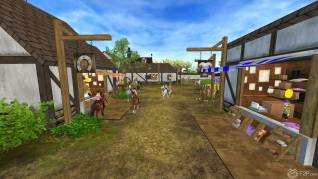 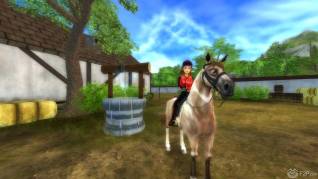 The game plays like a traditional MMORPG, the graphics aren’t stellar, but they’re passable, and unlike most MMORPGs you don’t have to wait half the game until you get your mount, what with it being pretty integral to the games premise. A lot of the time you’ll be completing quests, whether side missions or pushing the main story-arc, and doing a lot of [repeatable] races, which are pretty fun and your completion time is flagged on a leaderboard that whoever is at the top at the end of the day gets prizes. Unfortunately for the likes of a lowly level character like ourselves that won’t be happening any time soon as it seems like anyone can race and so high level players with high level horses and gear/items are unsurprisingly faster, able to shave 15s off our best flawless lap time.

The game is clearly geared towards a younger audience and seemingly female audience, whilst no skin off our nose we do think the gender bias is a little out of sorts and can only imagine the uproar of a more male themed game excluding the creation of female characters. Chat is restricted unless you verify your account through email, and character names are made from a choice of approved first names and a combination of two words for the last name; resulting in our character Esmerellda Oldbrooke. The game has plenty to do to start out, lots of quests, but you do hit a barrier where you can’t progress the game or take any new quests until the next day (presumably a real world day), alternatively you can bypass this wait by spending Star Coins; the games premium currency that you buy with real world cash. We needed like 40 something to go to sleep, but we hadn’t been given any in our few hours of gaming so it wasn’t an option. Being a premium member also gives you access to some member only shops, and free to play accounts only get to play up to level 5 (we hit level 4 and a half before having no quests left to do without the rest). 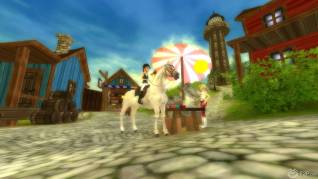 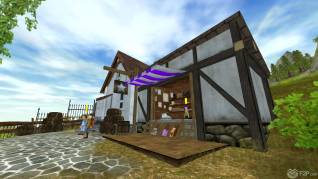 Overall it’s a decent enough kids game, story driven content, some virtual pet style mechanics and a social game where players can make their own riding clubs and compete with each other. The paid restrictions do pretty much put a wall in front of free to play accounts that there’s no way around, when you hit level 5 you have to become a subscribing or lifetime member to keep questing. If you’re into horses and are a little girl then the game is well suited, if you’re not a little girl then we’re seriously concerned as to why this is the game you want to play…