We recently got invited to the closed beta of GameForge’s new MOBA-RTS title Dropzone, a free to play sci-fi arena battle game with some obviously strong RTS elements; in it you oversee a team of three pilots as you are tasked with destroying the nests of dangerous bug like aliens known as the Kavash, whilst at the same time trying to fend off an opposing team looking to do the same. As players drive around the area to the markers indicated on their map, destroying the Hives, they will collect from them a “Core”, a purple cube that has vital information that must be taken to a terminal in the middle of the map at which point they will score a point and the first team that scores the most points in fifteen minutes is the winner.

There are two key elements about the game that we feel separate it from being a traditional MOBA, and does make it more like an arena-based RTS; firstly is that the matches are 1 on 1 duels as opposed to two teams of multiple players, meaning that your victories and losses are your own. Secondly is that players will always control three Rigs, these can be selected with the 1-3 keys or all of them selected at once with the 4 key; as each Rig has its own skills that players will want to use at certain moments the game does require a lot of micromanagement in comparison to a lot of MOBA games. In comparison Blizzard’s Heroes of the Storm MOBA has the character of The Lost Vikings, which are three characters controlled by one player with their own abilities, and generally they are considered the hardest character to play due to the micromanagement needed; well in Dropzone that is the default playstyle so you need to be on your toes. 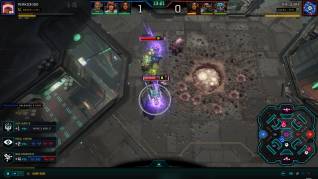 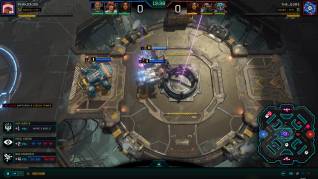 The customization of your Rigs is central to your own strategy, and the amount of options given to players really excels in allowing them to build their own ideal team to match their personal playstyle. To start with there are nine pilot characters, three per class (dps Gunner, damage soaking Tank, utility/heal based Mechanic), with each having a slight difference in their trait such as Vise and Knockout both being Tank pilots, but where Vise has higher armor and HP by default Knockout has a speed boost after using abilities. The more important elements are the modules that you can equip to your Rigs; six skills in total with three triggers abilities on your QWE keys and three passive skills.

There are a wide range of skills to choose from for each module slot that will on their own define how the individual Rig is used, but collectively with three customized Rigs it will determine the players overall playstyle such as focusing on high damage aggression, defensive play, high mobility to get around the map quickly, etc. Each module has a rank associated indicating what rank the Rig must be before that particular module is brought online, all Rigs start at rank 1 when the game starts and can only use their modules with a rank 1 requirement; as they destroy enemy team members of kill alien Kavash, the team earns XP and when they are able to upgrade a new rank the player must choose which of their Rigs they want to upgrade. This system provides a surprising amount of strategy as you need to decide whether you are going focus on having lots of low rank modules and level up all your Rigs equally, or maybe focus on building up a specific Rig to its Rank 4 weapon, etc. 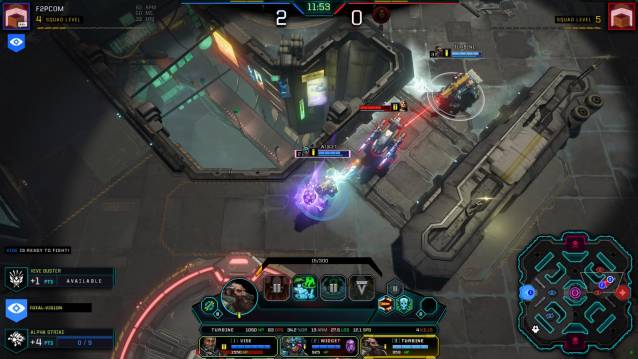 Our own personal preference was focusing on a 2 Mechanic support team with a heavy Tank that was kitted out for damage, whilst we lacked the extra damage a Gunner might provide it did feel like our damage soak with two healers meant we could last in battles quite a while, keeping the Mechanics further from the fight and our Tank just chewing up the enemy backline (Mechanics and Gunners, as they have far weaker health). We found a lot of people splitting their team in early level games, sending their rigs to try and take objectives such as grabbing watchtowers or taking on two nests at a time on their portion of the map, meanwhile we would roll over with all three Rigs onto their map (leaving our own hives alone for now) grabbing their vision towers and often picking off a lone enemy Rig that might have picked up a core. Grabbing vision watchtowers not only gives you vision of the area but can help you complete one of the three sub-objectives where you get 2 points (like you would with collecting two cores) if you control all the map watchtowers at once, the other beings destroying Alpha nests and as a set number of Kavash. Our early aggression always seemed to work well, it would kill the enemy players one at a time stalling their progression whilst granting us XP, giving us a chance for enemy cores, and allowing us to then return to our side of the map with a bit of a lead.

The game is extremely fun, the learning curve is fairly straightforward, but the skill cap is a lot higher than a lot of other MOBA games. Controlling three units with abilities you will want to access can be extremely confusing if your micromanagement isn’t that great (to the point where we wouldn’t recommend this game if you aren’t good at micromanaging as you will find yourself frustrated as you confuse switching between characters). Whilst there are only two maps available at the moment we feel a few more arenas, some different sub-objectives and the inevitable new pilots, classes and modules will definitely make the game worth playing. Daily Tournaments are set to be put into the game and players can already spectate each other’s matches live, so the potential for an eSports scene is promising. 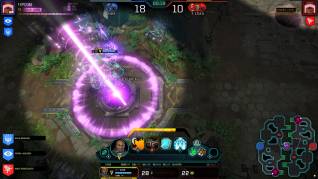 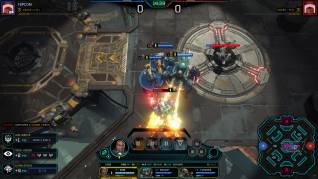 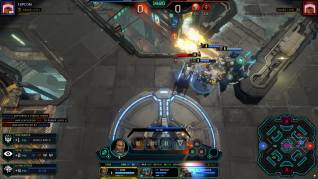 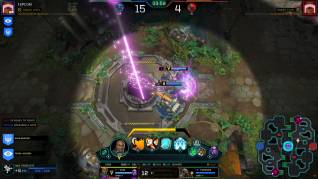