World environment looks amazing, the game is easy to pick up and start playing, the public area Events are fun.

The game doesn’t offer much that hasn’t been seen in other MMORPGs, English translations are really bad.

We got a chance to test out the initial beta of ASTA, the new MMORPG from Webzen, a traditional fantasy theme-park title that has been developed on CryEngine 3 and is now undergoing the conversion to western servers.

A pretty classic “rise up as the hero to save the world” type MMORPG, we hadn’t actually heard much about the game other than it was an Asian fantasy inspired MMORPG, and to be honest that didn’t exactly sound inspiring. We’ve played a lot of these games and they’re nearly always a clone of World of Warcraft.

ASTA wasn’t any different. Well, that’s not actually true, it was for once a really good clone. 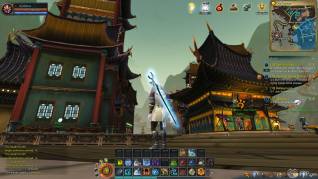 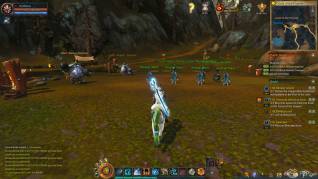 In general, I think it’s fair to say that Developers and Publishers always like to pitch their titles as unique little snowflakes, that their title is the one you’ve been waiting for; most won’t appreciate being called a copy of another popular (the most popular) MMORPG. The fact is though if you don’t want the comparison to be made and you don’t want people to say “WoW Clone”, then don’t make your game with pretty much the same mechanics, questing, combat and even graphics style (huge oversized buildings and objects in the world) identical to one of the most played games in the world. The difference, as we’ve said, is that MMORPGs that we play that have the WoW Clone feel just feel like cheap knock offs, like a half assed attempt to jump on the band wagon; Asta is no such thing. It’s a great game, not without its flaws, but pretty great all the same.

Stepping into the game you have two factions, 5 races (2 unique per faction and a human race with different backgrounds for each faction) and 5 classes that are split among the different factions, that’s not bad going and it at least hits all the key classes you need: Warrior, Healer, Rogue, Archer and Mage. Leveling up you get new abilities, hit level ten and you unlock the class talent trees and get to spend talent points (again, all very WoW). The combat does feel solid, at least as the mage that we tried out, with a lot of really long ranged casting we were pretty much able to kill everything in 2 or 3 hits all the way to level 10 without ever dropping below 80% mana; early game content is super easy.

The quests are very cut-and-paste, a lot of kill quests to butcher X number of Y mob, or world clickables to collect 5 orbs, herbs, pickaxes or whatever; actually there were a surprising amount of click quests. Questing was okay, the story was alright for the most part but the truly terrible translations into English really need another go over as at best it was badly entertaining, at worst it was confusing and near illegible. 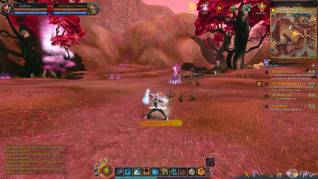 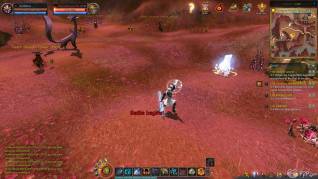 The cool side to questing was the area Events, up to level ten (which was pretty much the length of time to finish off the first region, with each race getting their own region and story-arc) in our region we had 3 are Event locations; each consisted of an automatic quest that triggered a little while after it had been completed (as they were repeatable) and you’d get a quest to kill 20 of X monster, which would spawn 3 of Y monster, and then when they were killed spawn the big bad boss. Whilst in the area if other people were killing the monsters you would see them ticking off on your quest tracker, however, when the boss was killed off you were rewarded based on your participation, if you manage to do lots of damage on enemies throughout the Event then you get some nice loot and Tai Tokens. This unique currency could be spent at Tai Vendors, they would sell all types of weapons and armor and goodies, including our first initial mount at a cost of 1 Tai, which was pretty cool as it normally takes forever to get mounts, other items however started at 5 Tai, so a little too pricy for us.

We enjoyed the PVE, which was a little easy, except for when we hit level 8 or 9 and opened up the Dungeon feature where we could queue up and be put into a group with other players and thrown into an elite dungeon. For our Dungeon we had to fight through some trash mobs, who died easy enough, and then face off some huge guy with a massive sword who did attacks with insane AOEs; thankfully as a mage we got a long range teleport skill early on which helped… but didn’t help enough. From the low expectations due to the trash mobs our group wiped twice on the boss and had to tackle him again, getting by with the skin of our teeth the final time (3 out of 5 dead). 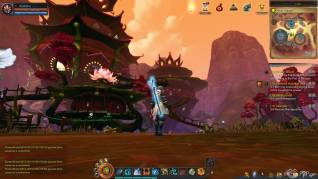 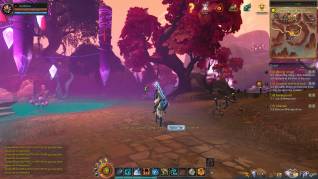 PVP was similar in that you could queue for battlegrounds and be thrown into a team; one battleground is point capture on a huge map, the one we ended up on was a smaller arena with multiple platforms that had traps all over them and you had to pick up a ball in the middle and get to the other side to score a goal. No don’t worry, I didn’t accidentally copy/paste an article about Star Wars: The Old Republic in here, it was exactly like Huttball, only nowhere near as fun as with the 10 v 10 it was ridiculously confusing as to who you were fighting against, absolutely no coordination, and no instructions on how to do.. well… anything. It might be better later game when people have a clue what they’re doing, but there’s other PVP to enjoy at later levels including team battles and Guild Wars.

Overall the game was pretty well done. It’s a clone but it’s a good clone, there’s nothing about it that you can “There’s a really cool and unique feature in Asta” that you probably can’t say World of Warcraft did first (or Star Wars: The Old Republic in the case of Huttball). There are a lot of little things we really liked, the treasure maps were cool and would give us a zoomed in small portion of the region map and we’d have to go to the location and try and dig up treasure, or the fishing where bar would come up with the cursor moving along it and you had to hit the small areas to catch the fish. Little things like when your viewpoint/camera goes underwater then when it comes out it is covered in water droplets, the ability to save our hearthpoint anywhere and transport back to that point. Nothing unique.

If you’ve never played WoW, or maybe have but want a change of pace and like the Asian fantasy influences in Asta, combined with the amazing visuals and world design, then it’s definitely a game worth checking out. However, we’re not sure how successful it will be if they don’t sort out the translations.