Recently the free to play 3D MMORPG Dream of Mirror Online (DOMO) went into open beta with a successful crowd-funded Kickstarter relaunch after the game was originally shut down in 2012, now back once more players get the chance to revisit the Mirror realm and team up with others to take on the new quests and content. Seemingly the title was going to be coming back regardless, but the crowdfunding allowed the developers to push more content and updates into the game so it’ll be interesting to see how it develops.

For us this was our first step into the game and what stood out first was the anime style graphics that have been used, the characters themselves are relatively well done and there’s an… interesting.. “glow” option in the Options menu which makes everything bloom and, well, glow (particularly good for hiding the otherwise jagged edges for a lot of the graphics). Where the characters and creatures look decent enough the user interface is absolutely dreadful. With poorly designed window frames and a chat window that looks like Microsoft DOS the entire look has this dated late 80s early 90s style that just does nothing to support an otherwise good looking game. The sound, however, is another matter altogether. Whilst there is music (usually the same track repeating over and over) and some actions have sound FX such as attacking mobs or looting items, there’s otherwise a complete absence of sound, no footsteps, no ambience, it’s extremely basic and very disappointing.

We jumped in as a Sylph race, traditionally magic users based on the lore, the truth is that other than a slightly different look, different style of movement and some occasionally different story quests, all the races play the same and are not bound to any class or profession. Similar to Final Fantasy XI players start out as a Commoner and, once hitting level 10, can take a quest to choose which profession they wish to go into that will then determine their class and available skills. There’s a decent bit of diversity there and something for everyone, up to hitting level 10 we only had access to a basic hit attack, though there was little in the way of challenges that required anything else. 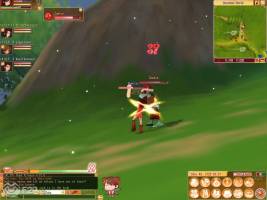 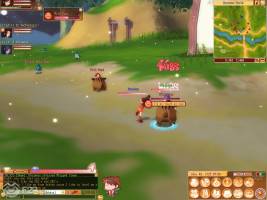 There is very little in the way of initial guidance when starting out and it isn’t until we noticed the Helper menu that gave us information so that we could actually work out what we could and couldn’t do. Essentially though the majority of the content is focusing on quests, picking them up from NPCs, heading to different areas, completing objectives and returning back; it is a traditional themepark MMORPG. The problem for us is that the world is extremely big and for a long time it wasn’t obvious where our actual quest locations were, particularly in some of the busier locations, so trying to perform them in order proved difficult, there is an auto-pathing option for each quest but it still doesn’t give you an idea of where you are heading sometimes and can take you miles away.

The questing, unfortunately, is also one of the weakest aspects; the game is about 15 years out of date as far as commercially successful MMORPGs go (at least in the Western market, the Asian market seems to like pretty much anything); the standard “Go to <X> and collect <Y> number of <Z>” is repeated all too often and given that the AI mechanics are relatively basic it just feels like a grind. The combat element is relatively uninspiring, but things get slightly more interesting when your Professions kick in, but the clumsy controls (particularly the default point and click movement where you have to manually switch to WASD in the options) make navigating the map and enemies a chore sometimes. 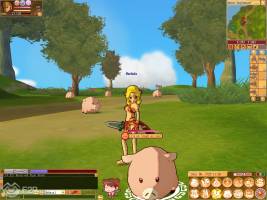 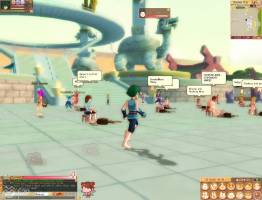 One of the stronger elements of the game are the Guilds, unlike a lot of MMORPGs the Guild system is more than just a roster of players that can chat; players are able to level up the Guild as a whole, unlock a guild building, acquire Guild skills and more. The detail that goes into some of the systems, including the Relationships feature and Marriages definitely gives a positive outlook on the game and that, whilst the overall classical questing style is a little out of date, some of the other features are much more immersive.

Overall the game just doesn’t feel current and doesn’t feel different enough to make it in the MMORPG genre, the fact that the game was already cancelled a few years prior presumably because it wasn’t making enough money (why else would you shut down a game?), so to try and relaunch a title with essentially the same systems, graphics and IP… has the MMORPG market really changed so much that a game launched in 2005 is going to be successful? Time will tell!