Lunia celebrates its second anniversary with the introduction of the user-created spearman, Gaon. The second character designed by Lunias massive worldwide community of players, Gaon wields the Power of Chaos as players travel and explore the fascinating Lunia world. Players guide Gaon, once a mighty dragon who fell into a deep slumber, in human form as he seeks to regain his lost power and return to his true shape. 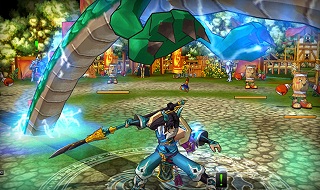