While surfing the Internet looking for new games or news about MMOs, sometimes you happen to stumble onto a new game you've never heard about before that just makes you go "Wow". This happened to us a while ago when, while visiting Kickstarter, we found an impressive new project called HEX: shards of fate, which aims to create the perfect mix between a MMO and a traditional Trading Card Game (TCG). 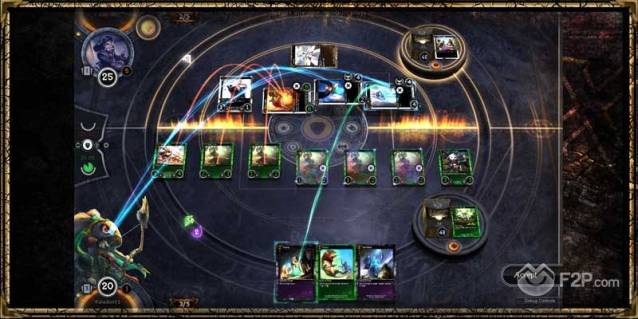 Behind the game there are the guys from Cryptozoic Entertainment, the same responsible for the World of Warcraft TCG (the "real" one, to not be confused with Blizzard's upcoming digital TCG Hearthstone), as well as other board/card games with big names such as The Walking Dead games, The Big Bang Theory Party Game and more. Moreover, one of the original World of Warcraft co-creators, Kevin Jordan, is working on the project as well. Just seeing their amazing portfolio of games on their website is enough to make you realize that this is probably not going to be the usual superficial free to play online TCG; however what's HEX exactly?

The whole project seems to be something quite big and developers are using all their experience in designing board/cards games to create a game which offers the best traditional TCG experience enriched by all the most popular MMORPG features. Basically it will be a well rounded high quality MMORPG with auction house, cards progression, full player economy, dungeons, groups, loot, equipment, guilds, a full Trading Card Game for the fights and much more.

We have to say that we often read similar stuff for a lot of games in development which then end up being just a generic and low-quality product. It's easy to write big words, but keeping up with the promised quality it's a whole different story. However, there are certain aspects in Hex that make us hope for the best. First of all, the way in which the developers talk about their game on the Kickstarter page and on the official website. They refuse to use too many shiny adjectives and prefer to offer you precise and concise descriptions of the game's features and mechanics, showing some explanatory imagery when needed. This "more honest" style actually gives you a feeling of reliability and of a solid product that knows where it's heading, compared to the usual misleading or too fancy descriptions that stink of rip-off but the reliability alone doesn't make a good game; good features do.

Being a PC game allowed the developers to add features and touches of class that would be otherwise impossible in a physical TCG, like the double back, the transformations, the experience/equip progression and more. The double back gives your card 3 sides: the main one, which you see while playing and where the card image, description and skills are, and 2 backs, where you can find lore, experience of the card, stats, badges, achievement and more. The transformation cards are cards which change their appearance and effect during the fight, evolving to totally different new cards. Moreover, each card can gain experience to become "foil" and can be equipped with gear and gems which change how the card works and give it new skills or effects.

There are actually TONS of features in development, and just to give you an idea of what you can expect, we'll try to summarize the most important ones in a list.

For the MMORPG part of the game you can find:

- Fully customizable champions with talents, gear and abilities
- Collectable gear, with different rarity, that change how the card works
- Explorable PVE dungeons with deep TCG puzzles, storytelling and group fights
- Guild system with guild deck bank and guild tournaments
- Auction House where to buy and sell cards and other in-game rewards
- Factions quests and rewards which unlock adventures and unique card and gear

- Over 350 cards in the first set alone
- Cards customization with gems which can be mixed to create unique combos
- Double back, so each card can include all the needed information
- Transforming cards which change mid-match as you play
- Organized play infrastructure with different type of tournaments, which is aimed to become an e-Sport 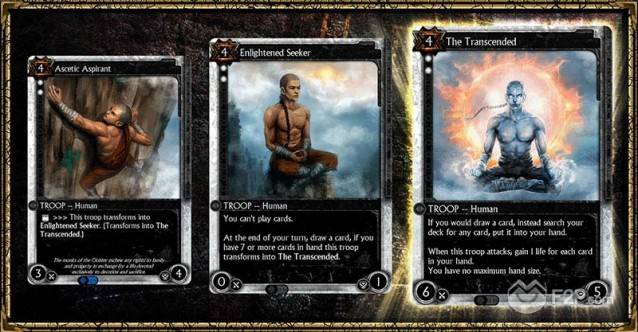 Now you can see that there's a lot you can sink your teeth into, and just to make you drool more, the developers released a gameplay demo trailer which highlights the game's battle mechanics and the basic rule-set. We were extremely excited looking at the video and if you are, or have ever been a Magic: The Gathering fan, you will understand why; Hex looks A LOT like Magic, in a good way. As you can see in the video which gave us a nostalgia attack, you can find all the elements that made Magic famous, like resources (which works as lands), creatures, spells and HP, and the rule-set seems extremely similar too. Is it too similar? Maybe, we can't be sure just watching this early video. Is it a bad thing? As gamers ourselves, we don't think so, the Magic's formula is probably one of the best ever made for a TCG, so if these guys manage to take inspiration from that and pop out a solid and complete MMO, well, that's just for the best, and we are sure that a lot of players would agree with us. Ultimately even if still in development, we enjoyed the graphics and the style we've seen in the video. The battlefield and animations seems simple but well made, everything is extremely clear (which it's probably the most important thing in a game like this) and it's easy to understand what's happening on the battlefield in the blink of an eye.

It's still too early to try to guess if the game will be able to live up with the expectations and keep the promises made to the players, but for now one thing is sure: the project is having a HUGE approval on Kickstarter, managing to rake up over $1.300.000 (on a request of $300.000), and right now there are still 9 days to go. What more is there to say? A lot of gamers really believe in this amazing project, and we wish the best to the developers for sure.