HEX: Shards of Fate is a free to play card collecting/trading game with MMO/MMORPG elements where players must build diverse decks and battle against each other in PVP or explore an exciting PVE campaign mode. The game has seen its share of ups and downs, hasn’t quite reach full speed yet, but whether it’s your kind of game… well let’s see…

Card Trading/Selling - Most games in the genre market themselves as CCGs (Card COLLECTING Games) with an emphasis being that you can't trade between players; Hex is a true TCG (Trading Card Game) allowing players to trade/sell cards to each other or sell them on the auction house

Graphics/Artwork - From the user interface, game graphics and effects to the detailed card artwork, the game looks fantastic and is way beyond most other CCG/TCGs

PVE Campaign - Join one of two factions and work through a PVE mission based campaign earning new gear and cards; the campaign world map is divided into nodes, each an event or battle, and players can choose their own path making a unique adventure for every player

Complex Mechanics - HEX utilizes old school card mechanics where players can react to an opponent's play during different phases, and even react to reactions, resulting in a chain of actions and the highest level of strategy

Socketed Cards & Gear - Really bringing in the MMORPG element is the idea of augmenting your cards to provide different abilities and boosts to them when played; either with Gems that can be socketed or equipping cards with gear and items

Combat Mechanics Aren't Original - Anyone who has played Magic: The Gathering will be all too familiar with the mechanics behind Hex's combat sequences, so familiar in fact that Hex's developers (Cryptozoic) were sued by Wizards of the Coast for copyright (it was settled out of court)

Slow Gameplay - With complexity unfortunately comes slower gameplay; as it is based on a Magic the Gathering system typically played in person, the slow phase times really do make games drag sometimes

Player Run Economy - Whilst a nice idea in theory the card trading/selling is at the whim, in part, to players who can spend cash on the game and so some cards can be near unattainable and the auction system in general can end up being massively under-utilized by free to play accounts

Under Delivered - With the Kickstarter that crowd funded the game into existence there were a lot of promises made that the developers have struggled to keep (or at least keep on time); from sets, adventure zones, missing dungeons and most importantly...

Multiplayer Raids - One of the big selling points for the Kickstarter was the idea of multiplayer "Raids" where players can work together to tackle difficult content; the $600k milestone promised "three additional Raids" at launch; they reached nearly $2.3 Million, but the game is yet to see even one Raid… Probably the only thing the Kickstarter funded was their court case with Wizards of the Coast... 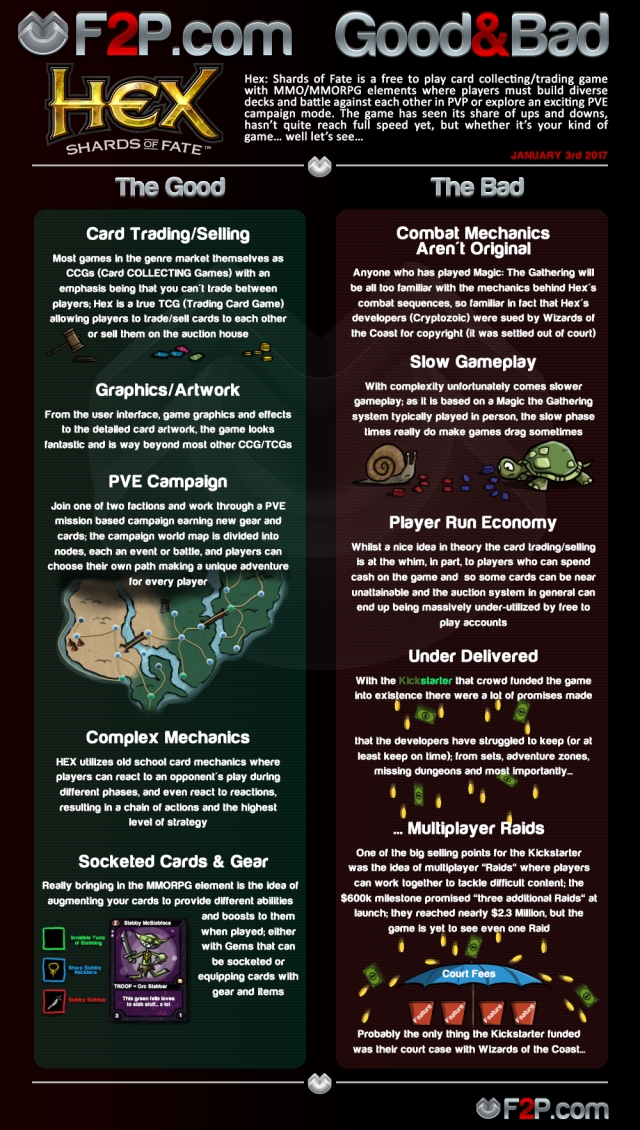