With the Perfect World International: Genesis expansion just around the corner on March 2, we're unveiling the most requested feature, Guild Bases.

Not only will guilds be able to purchase these bases, they will also be able to upgrade the four wings to unlock faction-specific quests, fashion, skill books, equipment, items and gear.

How to Create Your Guild Base: 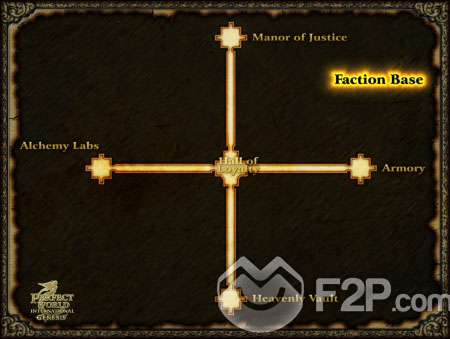 Your new base will consist of a center room with four long hallways extending away from it, each leading to a separate wing. Each wing serves a specific function.

* Armory
- From here you'll be able to access special faction-only gear. Gear from the Armory can be purchased with Contribution, and better gear can be accessed by upgrading this wing!

* Alchemy Lab
- The Alchemy Lab gives you access to powerful 1 hour buffs that can be purchased with Contribution. Upgrade this wing to gain access to more powerful buffs!

* Manor of Justice
- This is where you'll find the various quests that will award you with Contribution.

* Heavenly Vault
- This very important wing is where you'll be able to turn in your Guild Materials to upgrade the various wings of your base. You'll also be able to exchange one type of Material for another here, though the exchange rate is not quite 1:1...

* Hall of Loyalty
- This is the center of your base, and it specializes in.. well, trivia, actually. Answer questions correctly for different rewards! You'll also find some other quests here.

Aside from the different wings, your Guild Base also has an area dedicated to raising monsters. You'll be able to get special quests to kill these beasts for tons of EXP and Spirit.