Interview with Game Director for Arena of Fate

Arena of Fate is another new MOBA gearing up to enter the genre in, what many would say, is quickly becoming a quickly overpopulated market and at Gamescom this year our own meetings were definitely more MOBA heavy than normal. The game itself follows a more traditional MOBA style including laning, towers, pushing minion waves and finally trying to get into the enemy base to destroy their token structure.

On the surface there doesn’t seem to be a whole lot different to AoF in comparison to other classical lane based MOBA such as League of Legends or DOTA2, whilst the fairytale and fiction theme is unique, allowing players to play as different heroes brought to life from classic literature and history randing from Little Red Riding Hood to Nikola Tesla, the game does offer a new spin on the MOBA genre. 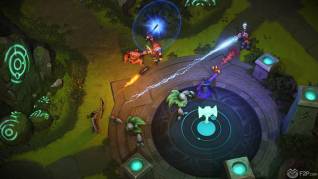 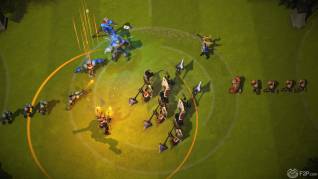 Speaking with Vesselin Handjiev, Game Director at Crytek one of the key things he repeated over and over was the idea that Crytek wanted to make the game more like a sport by having a set time limit for each game, which as MOBA are extremely popular eSports it does lend itself well to the notion. As a way to step away and make themselves more unique the team are trying to do away with the long 40 minute plus games that other MOBA can be, not everyone has that type of time limit to sit down and play a casual game in a session. How the game will work is that as well as an all-out victory by dropping the enemy team’s final base structure players also earn points by killing heroes, dropping lane towers and completing other objectives, so with a scoring system and a time limit we can see what they mean by it being more like a typical sport.

The game focuses on team oriented gameplay, more so than some other MOBA at times, and if the team doesn’t work well together then they will struggle; similarly the players have to constantly play with a somewhat aggressive style. As you can earn points through the game with various objectives any players that try to rest on their laurels will find themselves coming unstuck “if you are winning the game and start just defending the score until the game ends, then you pretty much make those objectives easier to take by the losing team and I’ve seen many games turn in the last minutes.” Currently there’s only one map being played, the core map, which they will be sticking to for a while and polishing it up a little more, working on pathfinding and NPC objectives, but then later open up other maps.

There are a variety of roles in the game, but not locked to individual characters as per normal MOBA, such as a Sweeper that’s good at cleaning up enemies with low energy, getting boosts on their attacks, the Breaker does a great job on towers and structures, able to shut down their shield with a single hit. The roles really work together to compliment the full team roster and the developers have gone out of their way to ensure that there’s no competitiveness between players on the same team such as trying to steal last hits, focusing on it being a team vs team battle. Whilst there are also healing characters players are also able to replenish their health at their closest tower, instead of having to constantly go back to their home base, which keeps players on the frontline and constantly in the battle. 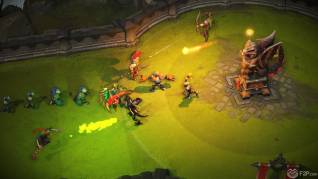 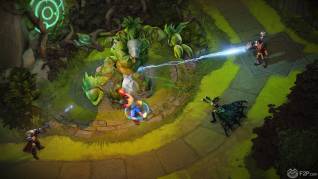 Arena of Fate just entered closed beta and Handjiev is adamant that there has so far been no negative feedback from players in the testing phase with no fundamental changes to the core gameplay needing to be made, all have been really positive and, in his words “making me a really happy developer”. That said it has been an extensive testing phase, the game has only just gone into closed beta and we playtested it at GamesCom last year when it already looked like a fairly polished product, but this is to make sure that they have everything polished and tweaked before putting the product out there. When comparing themselves to other games there’s a lot of features that they like from other MOBA, but with their core gameplay and the timed scoring mechanism they feel that there’s a lot that just wouldn’t have synergy with their main mode.

When the game finally releases it will of course be free to play according to Handjiev “first of all it won’t be pay to win, second thing is no paywalls; what we would really like to achieve is to create content that players would like to have, that’s not needed, they don’t need it to be better or go higher in tournaments and rankings, but they just really enjoy; more social features things like that, that’s our focus but more information will be released in the coming months.”