Away from the busy GamesCom centre we took a trip down the road to the Radisson Blu hotel where we were meeting up with Gazillion Entertainment to check out Marvel Heroes. Escorted up into a private conference room we were introduced to President and COO David Brevik (best known as co-founder of Blizzard North) and VP of Marketing Leo Olebe (ex-Marketing Director Star Wars: The Old Republic). 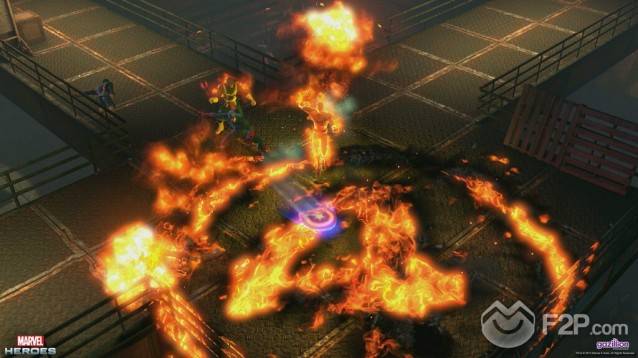 “Diablo meets Marvel on steroids.” This is the tag line Olebe wanted us to take away and the line that seems to be doing the rounds from GamesCom with those who had the pleasure of meeting these guys. Watching the gameplay footage it was hard to quite grasp where Olebe was going with that, certainly it’s Diablo meets Marvel, but from what we’ve seen so far I’m not sure where the steroids come into it (Hulk maybe?). That isn’t meant to take anything away from the game; for a browser based free-to-play game Marvel Heroes looks impressive, hell even if it were a paid for console game it would still look impressive and hold up to many of the latest games. The graphics and UI are sleek, the movement with the characters within the game is fluid and responsive and I’d echo Olebe’s sentiments on when he first saw the game as to “why aren’t you selling this?!” 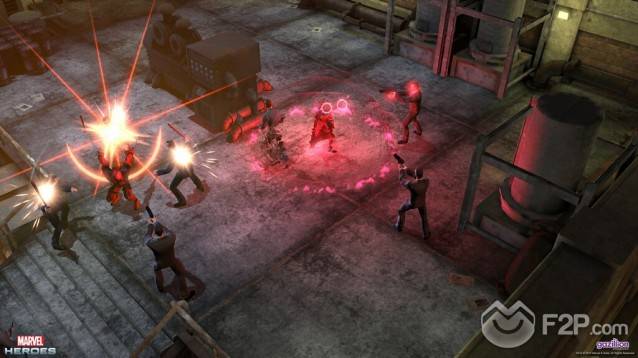 Whilst there wasn’t much new to learn from the meeting, at least for those who have been following the game, it was good to get the chance to chat with these two giants of the industry. A few times we threw questions at them and they were expectantly coy or vague with their answers, they’re no newbies to the industry and we don’t doubt that every inch of information they intend to release will be done to schedule and not before.

Gazillion are leading with the title being an MMO Action RPG, and it’s clear why. It has your typical RPG “Diablo” elements with questing, exploration, combat and loot elements with the added social features expected of an MMO (guilds, chat, friends list, etc.). 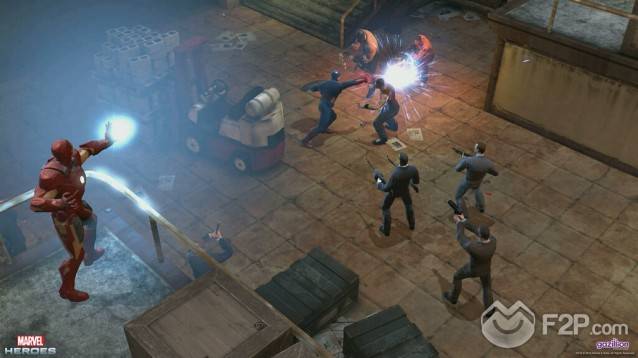 Though still vague on the details we saw character art and the cinematic of Dr Doom holding the Cosmic Cube, which some may know has made a number of appearances as “The Tesseract” in the Marvel Films (Iron Man 2, Thor, Captain America: The First avenger, The Avengers) showing the tie in and close relationship with the Marvel franchise. Gazillion also have Brian Michael Bendis working on the storylines for Marvel Heroes, the acclaimed comic book writer who practically defined many of the heroes that feature within the game. Clearly Marvel is willing to throw a lot of their resources behind Gazillion Entertainment for the production of the title. 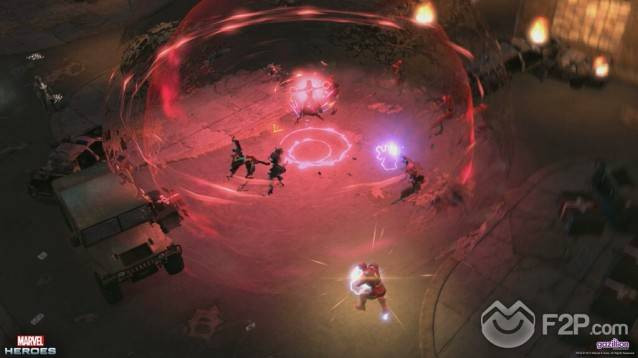 As well as visiting many of the world’s iconic locations (the demo takes place in The Xavier Institute for Higher Learning/ the X-Men Academy) one of the more interesting aspects of exploration is the randomization of zones where objectives, mobs and even portions of the map are different each time you go into a zone meaning the replayability of the game just went up a notch.

Also bringing the “MMO” to the title are the Public Combat Zones, areas where an expected 25 – 50 players can be in an area co-operating on quests and helping each other PvE. When asked if these areas were open for PvP, or if PvP was even in the game Brevik simply smiled and said “It seems like a good idea.” 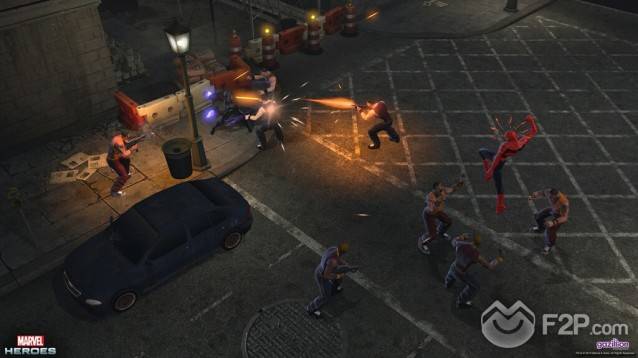 Players can play as one of the twenty currently released Marvel superheroes (though this still isn’t the complete list), each hero acting as their own “class” with their own skill sets. However, Brevik went on to say that you will be able to customize each character and level them up in typical MMO fashion to suit your own play style “… each hero is its own class but there are different builds; if you want to play Wolverine then you could either focus him on giving damage over time attacks, or concentrate more on his acrobatic abilities”.

Whilst it is possible to have players using the same character in the same group, i.e. a full group of players using Iron Man, there are going to be many levels of character costume customization with plenty of different looks per hero. With an entire back catalogue of comics where the superheroes have changed their looks many times, we can expect to see this reflected in Marvel Heroes. Olebe went on to talk about the micro-transactions within the game he briefly mentioned being able to pay to customize your character, I went on asking “will there be different costumes, or just different coloured skins that you can buy?”, with a smile to me and then to David Brevik he responded with “we said customization, we didn’t say costumes did we?”. Make of that what you will! One thing we can guarantee is that we won’t see heroes wearing another heroes’ costume, so sorry Hulk but you better put your Black Widow costume back in the closet. 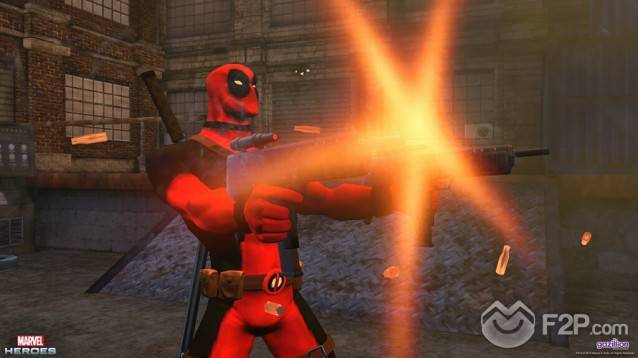 As we saw in the demo we were given loot drops that are specifically for your character, meaning very little arguing for whether a piece is suitable for your character or not and the equipped clothing items directly change the look of your character. There will be an Auction House type system within the game, which we are told will be more like World of Warcraft’s system than Diablo 3’s. 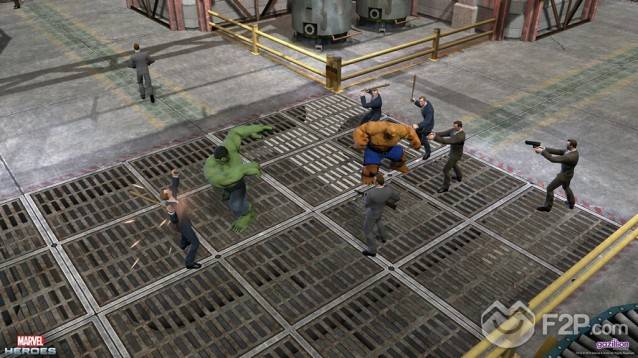 Whilst the verdict is still out on what the final game will be like, so far it looks to have all the makings of a great title. In my opinion, and one that I expressed to both Leo and David, was that the game is likely to greatly benefit the free-to-play and browser based games market; a stigma often being attached to either is that browser games are bad/low quality games or that free-to-play is a mark of a failing title scrambling to try and keep its player base (SW:TOR?). Given that this game has the full backing of Marvel and is free-to-play from its initial conception shows that F2P is actually a valid business model and this game if anything will hopefully begin to change a few attitudes to the genre. 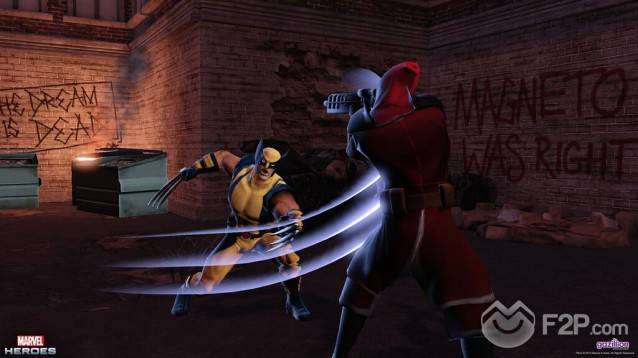