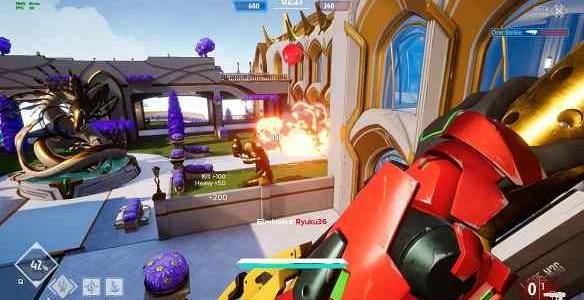 Players will step into the shoes of the Xandats, the elite of Xandaigdig soldiers in-game. With a combination of strength, technology and weaponry from the Seven Great Nations, a new class of warriors is born who will fight against the forces of other worlds to save the world from extinction. Players will have to equip and customize their armor (with a wide variety of options) to their liking while players battle each other, Xandats versus Xandats so they can demonstrate the worth of each player.

There are three game modes for this Free FPS, which are as follows;

Skirmish: Each Xandats team fights in a counter-clockwise battle (with time limit). As points are earned for your team, each kill will bring points for your fighting team. The winner will be the team that reaches the objective score of the battle, in the event that time is up, the winning team will be the one with the most accumulated points.

Annihilation: The Xandats teams will fight each other to finish off each other in these very well armed confrontations. Each Xandats team has a limited number of resurrections for each round of the game. The winner of each round will be for the last Xandat to remain standing. The winners will be the ones with the most wins in the 5 rounds.

Corruption: Each Xandats team scores by collecting the shards dropped by dead enemies. If you collect the shrapnel from your dead teammates, you can nullify your enemy points. During battles an obelisk will appear on the battlefield, which will destroy shards when destroyed, you have to collect the maximum of them to get more points. The battle ends when one of the Xandats teams reaches the target score or in the event that time is up, the winner will be the team that has achieved the most points in the battle.