A free to play browser MMO Dragon Awaken is set in a fantasy realm where players are the protagonists destined to save the world. By completing quests and progressing the game’s campaign players will unlock more details of the prophecy that saw their coming, stage based instances that will grant XP and rewards. The aim of the game is to recruit a team of hero companions to join the player on their quests, keep them upgraded and equipped and take on progressively more challenging content. 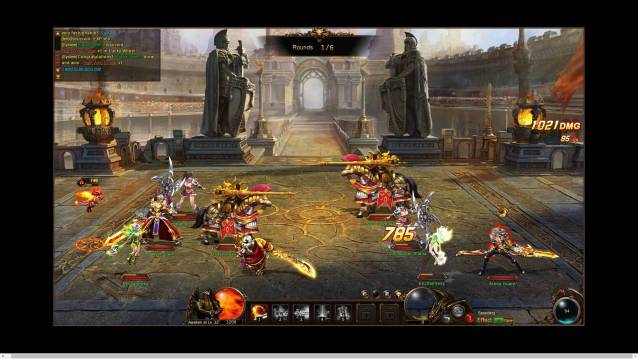 Dragon Awaken-The core concept of the game is a team building strategy with RPG story elements. Players must recruit new heroes and level them up to make their team more powerful and give players the chance to tackle higher level game content. Players have control of their characters around social quest areas where they can move around and talk to NPCs, whereas combat is a little more restricted with what players can do.

The game is free to download and play and provided a Recharge system where players can spend money to purchase premium currency that can be used to refresh timers, purchase missing resources and buy more powerful hero companions. The Recharge system also improves a players individual VIP level; the more times a player Recharges on their account the higher their VIP becomes, which grants more improved benefits.

As the Dragon Warrior players can acquire various dragon eggs and unlock a new dragon pet to take into battle, dragon eggs come in different types such flame, frost, rock and others. Players use resources to upgrade their chosen dragon making them extremely powerful combatants.

Through the Tavern area players can spend acquired Essence to purchase new heroes that they have faced in the campaign stages. Stronger heroes can be found on higher floors in the tavern and cost more Essence. Once purchased players can place heroes into their team formation, through the Arrange mechanic up to five heroes can be placed alongside the Dragon Warrior player character and their dragon. There are various positions to place a hero in, which provides an element of strategy,

Heroes must be upgraded with XP scrolls which allow the character to level up, increasing their stats and unlocking new skills. Heroes can only be levelled up as high as the Dragon Warrior, who increases their level by completing PVE dungeon challenges and other events.

When in combat players will load into instanced based areas and automatically enter battle. Combat is a semi-turn based system where the fastest heroes and enemies act first. The Dragon Warrior player character is controlled by the player, able to choose which skills to use and focusing on building Rage resources up that are then used to trigger other abilities. Companion heroes and dragons automatically use their abilities and the player has no control over them. Players also lack the ability to directly target an enemy, instead the combatant will target enemies based on their own individual targeting preferences, such as targeting enemies directly in front of them, which further adds to the strategy of where to position your team mates in the formation.

Aside from various PVE activities players can also enter one on one duels in the Arena and battle for leader board position against other players. When challenging an opponent the defender is not present in the fight, but their assembled heroes are controlled by the AI and players can see who has the strongest team. Players earn Honor points that can be used to purchase unique items and resources from the Honor Store.

Each player also unlocks access to their own land at higher levels, able to construct and upgraded numerous buildings that unlock different features and give access to resources (the Castle grants gold currency) or buffs (the Altar provides random buffs from daily prayer).