Exclusive interview with Phibes primary GM for Secret of the Solstice 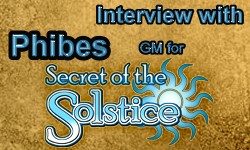 Its a pleasure to interview you. Thanks you for concede us your time. First of all, could you introduce yourself to our readers?

Answer: I am GM Phibes, the primary Game Master for Secret of the Solstice. I have been with Outspark for a year and have enjoyed working on all of our free online games, including Fiesta and recently Fists of Fu and Divine Soul.

I would to start asking the meaning of the name. What does it mean?

A: The Solstice Sphere is a powerful relic bestowed upon the ruler of the Land of Xen. Two feuding Princesses, Adeline and Marian, at battling for control of the sphere and the ability to unlock the secrets of its power.

How would you describe Secret of the Solstice within the MMO games genre?

A: Many of our most loyal fans point to the more classic look and feel of Secret of the Solstice. While still maintaining superior graphics, Solstice has gone beyond most MMOs with increasingly customizable character items, weapons and apparel items. It is a free to play game.

Could you speak us about Secret of the Solstices background?

A: Secret of the Solstice is developed by a leading Korean game developer. We have worked closely with the developer on this game for several years, helping to adjust it for an American audience. What we have learned, however, is that we have hundreds of players and fans all over the world; from Europe to Africa to Asia and back here to North and South America. Solstice has a great international appeal. In fact, I can often observe players chatting in English, Spanish, Tagalog, Romanian. It just goes on and on!

Talk us a bit about classes and jobs.

A: We support the traditional classes youll find in most MMOs, such as Fighter, Mage, Scout and Cleric. Secret of the Solstice, however, allows players to experience Class Changes at certain levels. A player may one day undertake their Class Change quest and become a Disciple, Warlord, Assassin or one of many, many other higher level classes.

Why this game is more fun than others?

A: Solstice is an easy game to learn because of how classes and combat are structured, but that doesnt mean its too simple. As you grow your character, you can customize it further with more skills, stats and items. Our more advanced players spend hours adjusting their characters to perfect them for exactly the style of play each individual person prefers. I think this makes Secret of the Solstice an easy game for a new player to learn, but with the depth and customization an advanced player will love.

Talk us about the future. What are your plans in 2010 and beyond?

A: We are working on enormous amounts of new content for the summer months, including a dramatic increase in the number of quests (well have over 1,000), new monsters, items and in particular, were working hard to really give our players some input. We have added new fantasy pets and clothing items in direct response to player requests. When you play Secret of the Solstice , you REALLY control the direction of the games development.

Thanks you for your time. It was a pleasure. Do you have something to add?

A: Only that the best things are yet to come! Did I mention the game is free to play? Its worth checking out!