En Masse Entertainment has today published a development roadmap outlining future updates planned for their flagship action MMORPG, TERA. As part of the publisher’s commitment to their community, the roadmap provides dedicated fans with a look at what the game has in store for them in the final months of 2017 and beyond, including new content, a new race/class combination, in-game events, and more.

Kicking off the development roadmap is next month’s Arsenal update, which introduces two new dungeons – Thaumetal Refinery and RK-9 Kennel – as well as an overhaul of the enchanting and gear progressions systems, and the return of popular in-game events. En Masse has created a dedicated page for this content release, which will be updated with new information each Thursday until the update launches on October 10.

Today’s update focuses on the upcoming Thaumetal Refinery dungeon, home to a small tribe of goblins enslaved by archdevans and forced to mine a new type of ore with unknown properties. The archdevans have been experimenting on the ore to learn what uses it may have, using the goblins as test subjects to see what effects it has on living beings. Players will be tasked with exploring the dungeon and putting an end to the archdevans’ activities, and whatever horrors they may have already spawned.

Later this year, TERA players can look forward to playing the gunner class from a completely different perspective, as the upcoming elin gunner is currently planned for release in November, expanding the race options currently available for the class. Wrapping up the end of the year will be the annual Wintera holiday event, refreshed with updated activities and rewards. 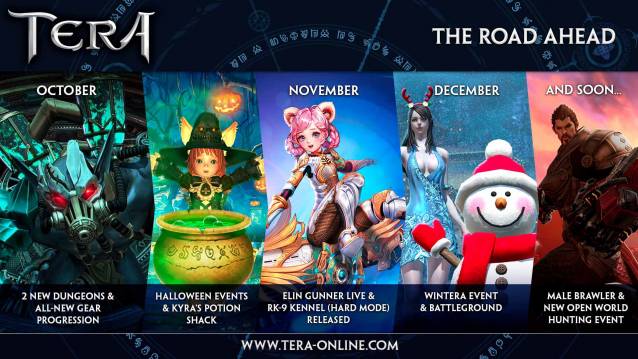