UTV True Games revealed details today about its unique character class and multi-classing systems for Faxion Online. Scheduled to go into closed beta later this month, Faxion Online promises to take players through the gates of heaven and hell as the divine struggle between good and evil wages on.

Faxions Class System is somewhat of a misnomer; said Frank Lucero, Studio Head at UTV True Games.In reality, the classes are nothing more than fundamental components that the players themselves can use to create their own toolbox of hellish destruction or heavenly onslaught.

During character creation, players select a base class which determines their initial set of skills and abilities and soon afterwards they have the option to train into a second classs line of abilities and, if they desire, a third.

So, what does this mean for the player? With the multi-class system, players will find that they can create their ideal character, experiencing Faxion their own way. If someone should want to play a Druid-like character they can create a Guardian who undertakes training from the Diviner and Crusader classes. If they want to be that evil-aligned Cleric theyve been running in their table-top campaign for years they should start as a Zealot and then learn from the Reavers how best to wield a weapon, turning their character into an armored healer that fights alongside weapon toting derelicts of hell. How about that Battlemage; duel-wielding blades and casting meteor storms? All of the above and much more can be created through Faxions multi-class system. 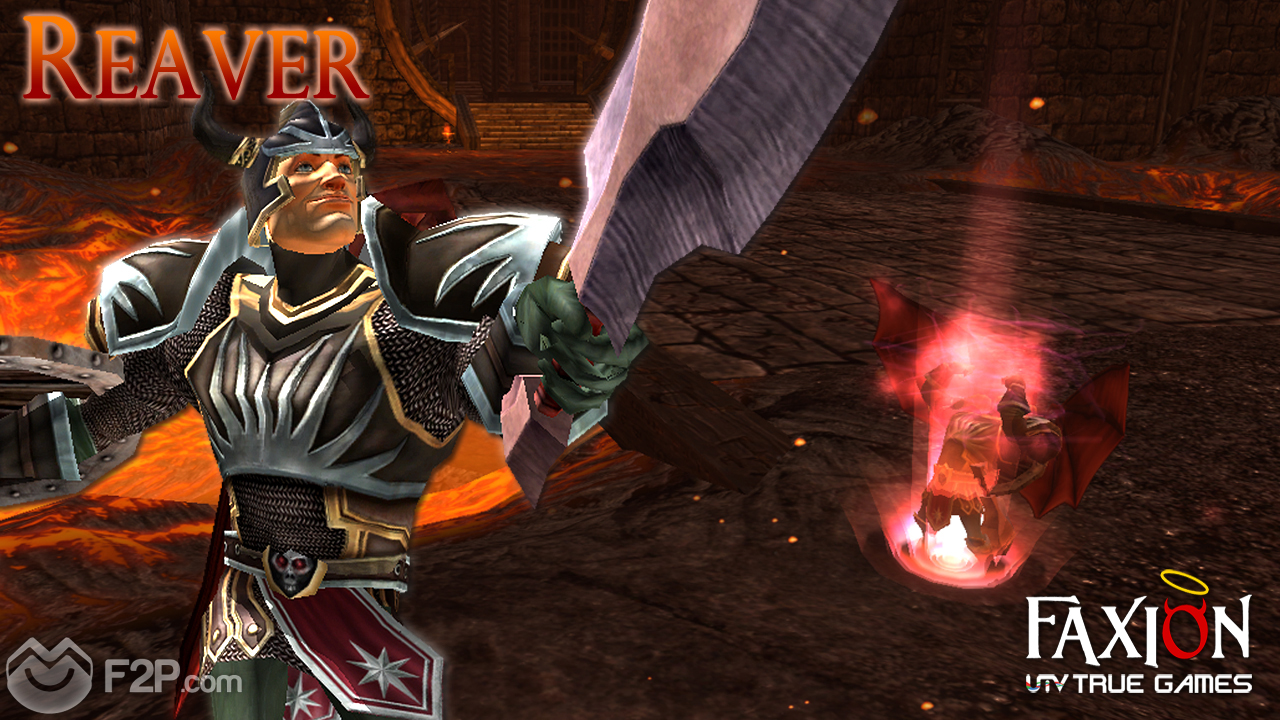 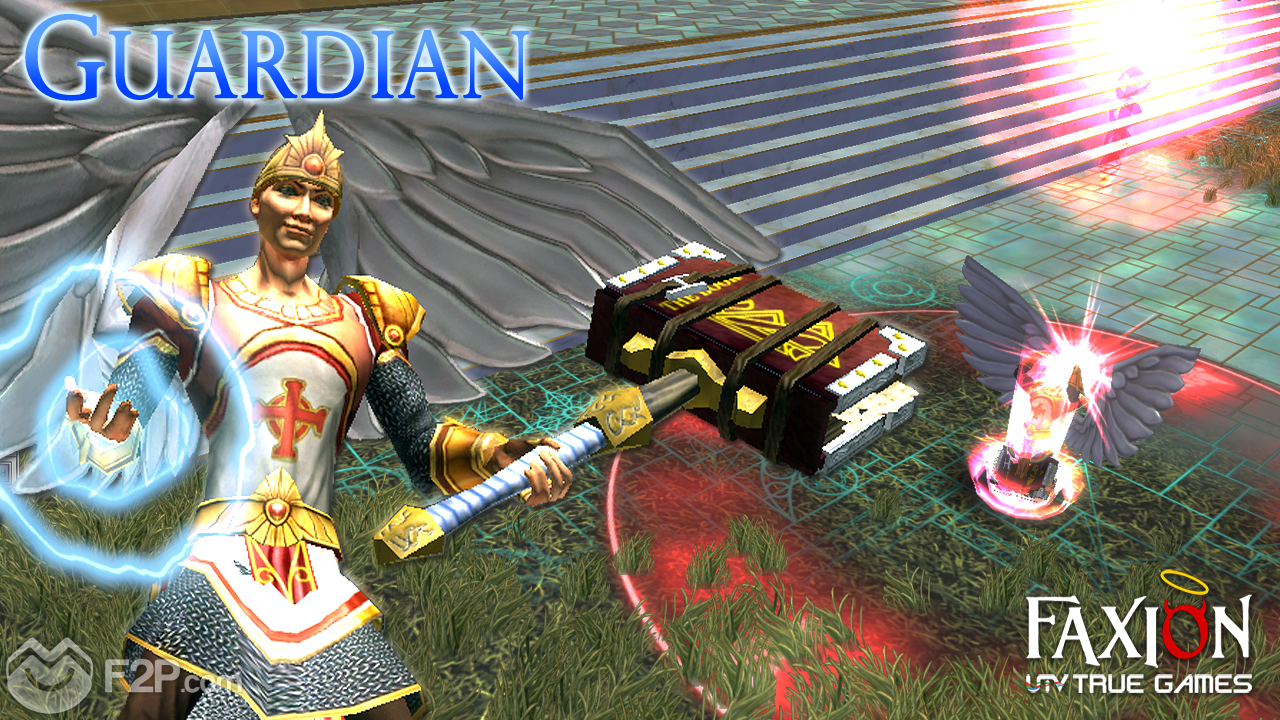 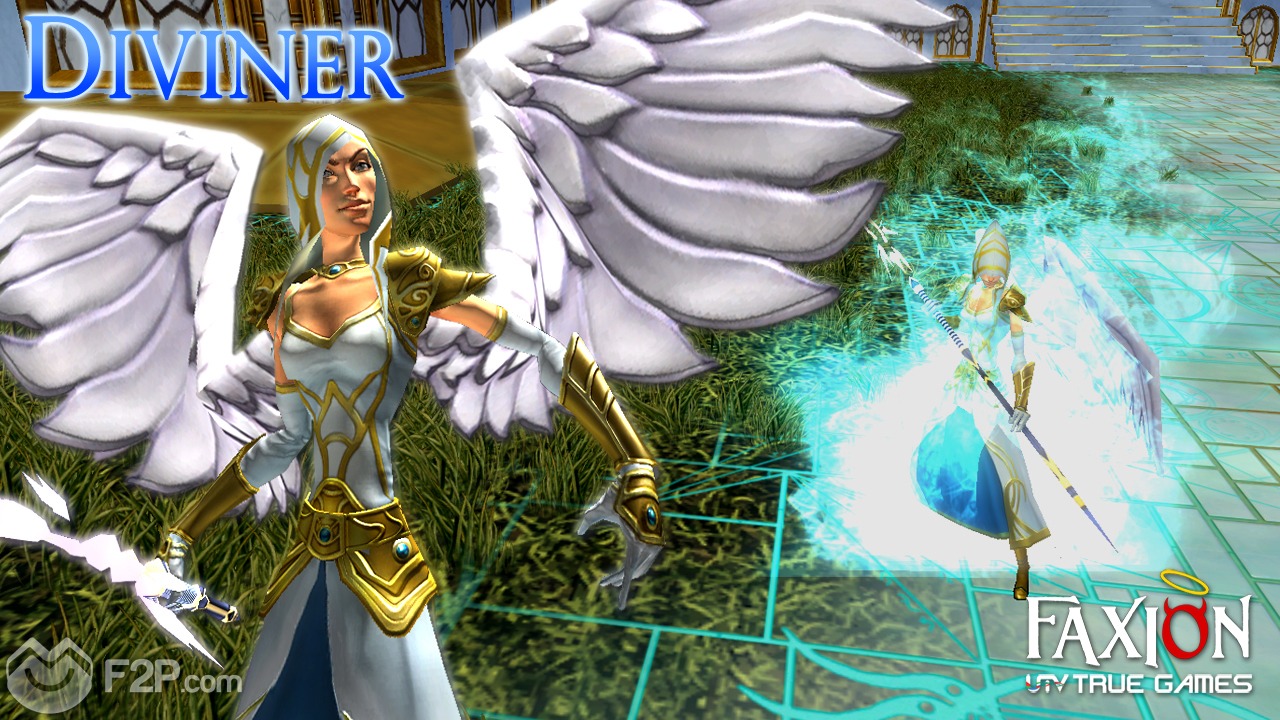 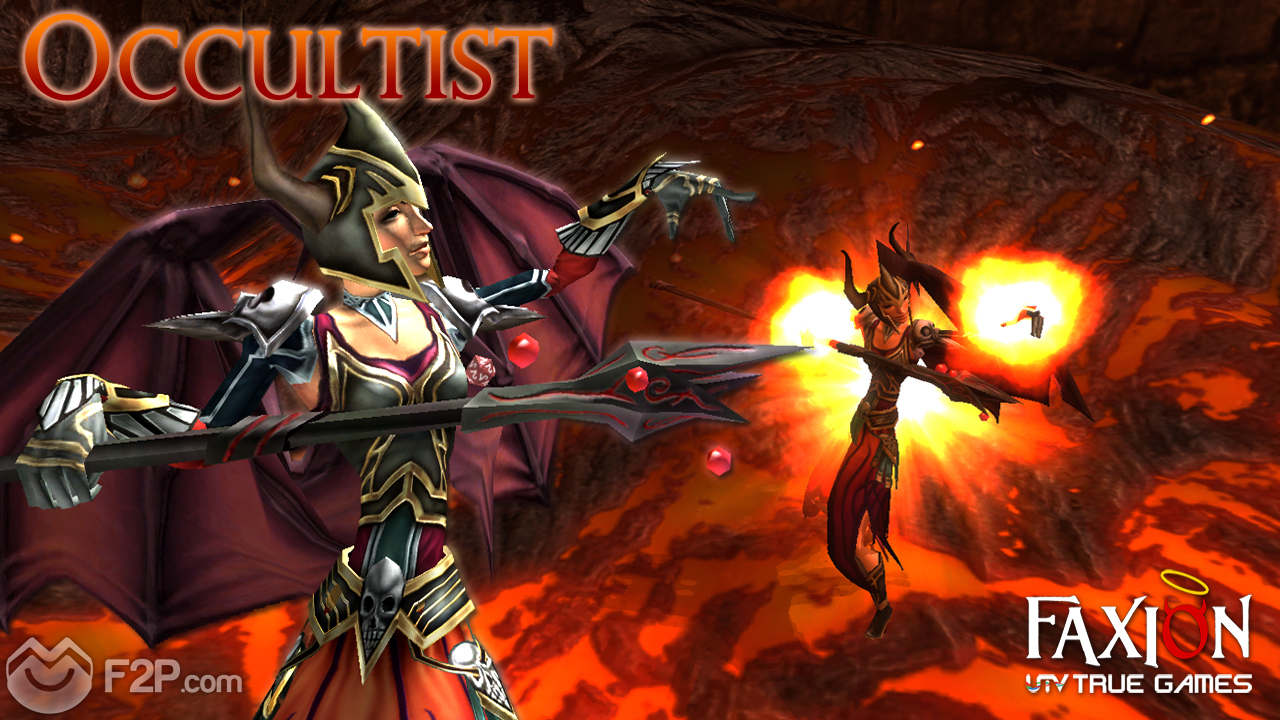 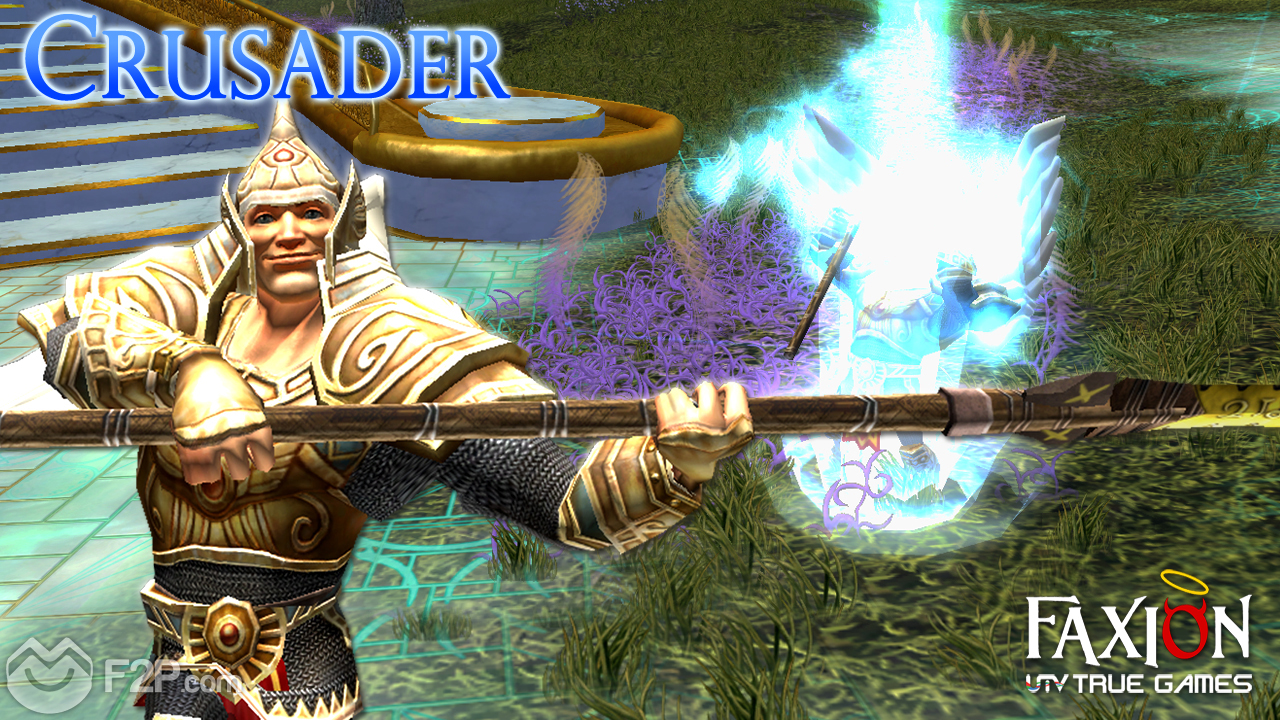 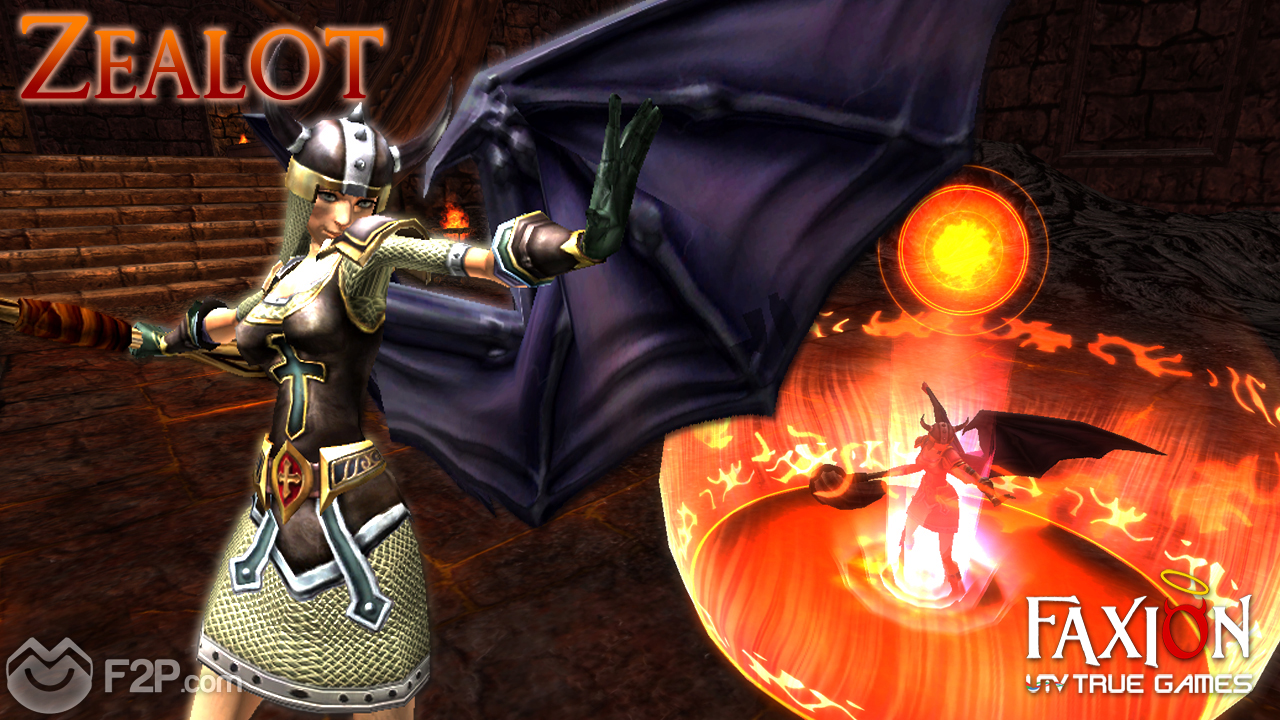 Crusader
Crusaders, the backbone of the armies of Heaven, stand at the forefronts of the war  ready to defend the holy gates and all they stand for. While reliant upon their weapons and armor, it is their faith that makes them a force to behold, sustaining them during lengthy skirmishes. No stranger to hand-to-hand combat, Crusaders are strong fighters who rely on mobility and sheer brute force to bring low malefactors. Glory shine upon these celestial warriors who eternally push back Sins shadow.

Guardian
Heralds of peace, Guardians bolster their allies with miraculous healing, protective sanctification, and unfaltering conviction. More than simple medics, these agents of mercy lend their spiritual aid to virtuous Crusaders and Diviners while humbling those who abdicate from the light. Still, they mourn those who have lost the path and grant what peace they can to the fallen. Guardians understand that patience is key when guiding the ignorant, and are willing to repeatedly rehabilitate those lured by Hells deceit.

Diviner
Diviners step onto the battlefield knowing that the wary eyes of the accursed are upon them. Their mastery of the elements, righteous fury, and enthusiasm for chastising the wicked justify these concerns. Eons have been spent gathering divine truths, and Diviners use this wisdom to unleash destructive forces from afar. Truly fearing no evil, they hardly even bother to armor themselves. Instead they rely on their skill to call upon divine winds, raining down holy retribution to devastate entire hordes.

Reaver
Reavers are the favored marauders of Hell  dark champions who worship at the altar of battle. They believe the cries of their victims to be the purest hymn and shedding blood the only true prayer. Wrapped in armor and warped by infernal blessings, Reavers are often surrounded by enemies, taking on multiple opponents with cleaving blows and peerless defense. One day they will march on Heaven itself, and the groan of Heavens Gate breaking will briefly drown out the cries of the newly damned.

Zealot
Devotees of misery and Hells foremost strategists, Zealots are notorious for their proficiency in matters of life and death. Regularly found on the front lines alongside Reavers, they place potent wards that offer protection to the forces of Hell or destruction for any servants of Heaven that stumbles upon them. Pragmatic in all things, Zealots are far more willing than their comrades to consider a plan of action where murder isnt the first and only step. After all, why would they want to limit their options for spreading chaos, corruption, and madness throughout Limbo?

Occultist
For Occultists, power alone simply isnt enough. But being seen wielding power controlling the ebb and flow of battle while blighting the land in flashy demonstrations of supremacy  this is what drives Occultists to study with such fevered intensity. Bending the elements through sheer strength of will, these students of the dark arts are careful to confront the forces of Heaven on their terms, lest their lack of martial skill be the deciding factor. With a unique blend of contempt and arrogance, they use their expertise to tear the heart out of even the most formidable regiments.