We were given the chance to check out the 10th EverQuest II expansion: Tears of Veeshan, given a free press access account to have a level look around in the game and find out what’s new for ourselves and proving that whilst a lot of focus has been given to EverQuest Next SOE are ensuring that EQII and its community don’t suddenly suffer middle child syndrome. With the new expansion comes the much expected new overland zone, in this case the Vesspyr Isles, as well as a new class in the Channeller, and many other tweaks and improvements throughout the game. 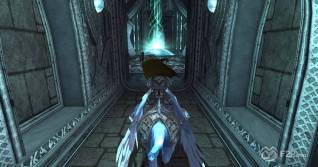 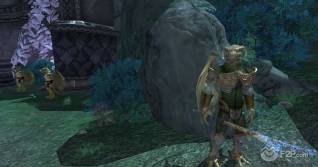 The Vesspyr Isles are a new area introduced with the expansion and consist of a dozen huge floating island expanses, highlighting straight away the need for a flying mount to get between them. Thankfully with the use of the Heroic Character feature that was also recently implemented, where players can start with a level 85 character (accompanied by a free flying Pegasus mount), we were able to have a look around the zone and check out the scenery. Unfortunately for us the area is in fact much higher in level than our character, the quest chain and main story arc from the expansion is started at either Qeynos or Freeport when a player hits level 95, and so all the mobs in the area of Vesspyr Isles were around level 100. We died many, many … many times to grab these screenshots.

Unfortunately the biggest setback of the level requirements meant we could not fully explore all the content, however from our first impressions two things were clear: the zone is an exceptionally beautiful and well-designed area and secondly it is Dragon central. 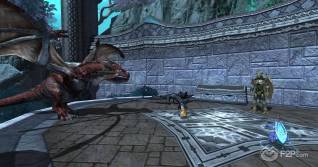 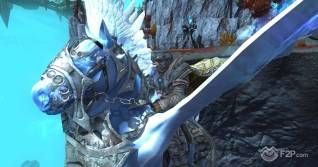 The main focus of the expansion quests and storyline continues with the ancient Dragon Kerafyrm wanting to bring the end of days to all Norrath, and your task obviously is to stop this from happening, but in the course of events Kerafyrm draws the huge Temple of Veeshan up from the ground and into the sky creating his own stronghold, which makes for some epic heroic dungeons and raid content. There are in total nine new dungeons accompanying the expansion, including the game’s first dungeon that allows flying mounts.

There’s plenty of new quests that have introduced this including adventure quests (the first in the new zone will actually provide a flying mount upon completion), collection quests and even trade skill quests to accompany the increased number of trade skill and trade skill apprentice items. As well as this there all-new Dragon themed Alternate Advancements (AAs) as well as the general limit being increased up to 340.

Finally the game introduced its 26th class in the form of Channelers; a huge hybrid of healer, archer, pet controller, Priest archetype that play a balancing act with nature. They are able to build their own constructs, which hold the essence of various creatures and can use them as Shields to take damage meant for a Channeler or his companions . The class uses their bow to devastate their enemies and unleashed healing tool to aid their allies in battle. One of the key features of a Channeller is finding balance with their Conduits, when using these abilities it increases the Channellers’ Dissonance which affects their connection and harmony to the Truespirit from which they get their power. Once their Dissonance gets too high they are unable to use their Conduits and so must balance their use carefully, as is the nature of the class.