Blade & Soul is a free to play fantasy MMORPG set in an ancient realm of battling factions. It takes its cues from the Wuxia genre (think Crouching Tiger, Hidden Dragon style acrobatic martial arts) with a more fantasy twist and mystical beasts inhabiting the world.

Let’s take a look at the best and worst of this MMO that inspired its own anime show...

Wuxia Theme - Floating through the sky, running across water, leaping across buildings and explosive, dynamic combat; it's all the things good Wuxia martial arts combat is made of and Blade & Soul has it all

9 Available Classes - Each class offers not only a unique combat style which greatly affects gameplay and different approach to mechanics (such as the Kung Fu Master greatly relying on player reflexes), but also class only story-lines and quest chains

Soul Shields - Collect pieces of Soul Shields to customize how abilities work, equipping multiple pieces of the same shield grants extra bonuses, with the highest bonuses for wearing all eight pieces of a single shield giving players a collection based gear system that is open to individual customization

PVP Combat - The Action based combat is very fast and extremely fun, with players using the Wuxia theme they can battle through the air, jumping up onto buildings and fighting across rooftops; the combos and adrenaline fuelled combat is excellent

Character Customization - With dozens of options and sliders players can make some awesome looking characters, ranging from the heroic and lifelike to the truly bizarre and freakish

Dated Graphics - Originally released in Korea in 2012, by the time the game reached Europe and North America in 2016 the graphics were already very dated and so the game has already fallen behind other Western MMORPG releases

Gold Farmers/ Spammers - It at times feels overwhelming how many bots there are farming gold or the arena, combined with the flooded chat of these bots trying to sell their gold and services to players; it seems like NC Soft are struggling to combat a growing problem

Poor AI - Whilst the PVP is fun, and the combat system is exciting, the poor AI just means you don't get the same combat experience fighting in PVE and enemies don't put out the same kind of fast paced moves that players do, making combat slow in comparison which then feels like a grind

Boring Quest System - The questing is as dated as the graphics, falling on the aged "Kill X number of Y Creature" over and over with very few interesting story focused quests in between, as well as a fairly linear quest chain taking you from zone to zone with little in the way of player choice or different routes

Single Player Orientated - Lacking in any player-driven economy, territory orientated system, meaningful guild systems, player cities and more; Blade & Soul lacks so many elements that have players interacting that you can player the majority of the game solo as though it is a single player game

Restricted Inventory - There is nothing more frustrating in an MMORPG than a game that makes expanding your inventory a chore, forcing you to constantly manage your gear; unless you wish to pay real cash the game's Dragon Pouches are a pain to acquire through play 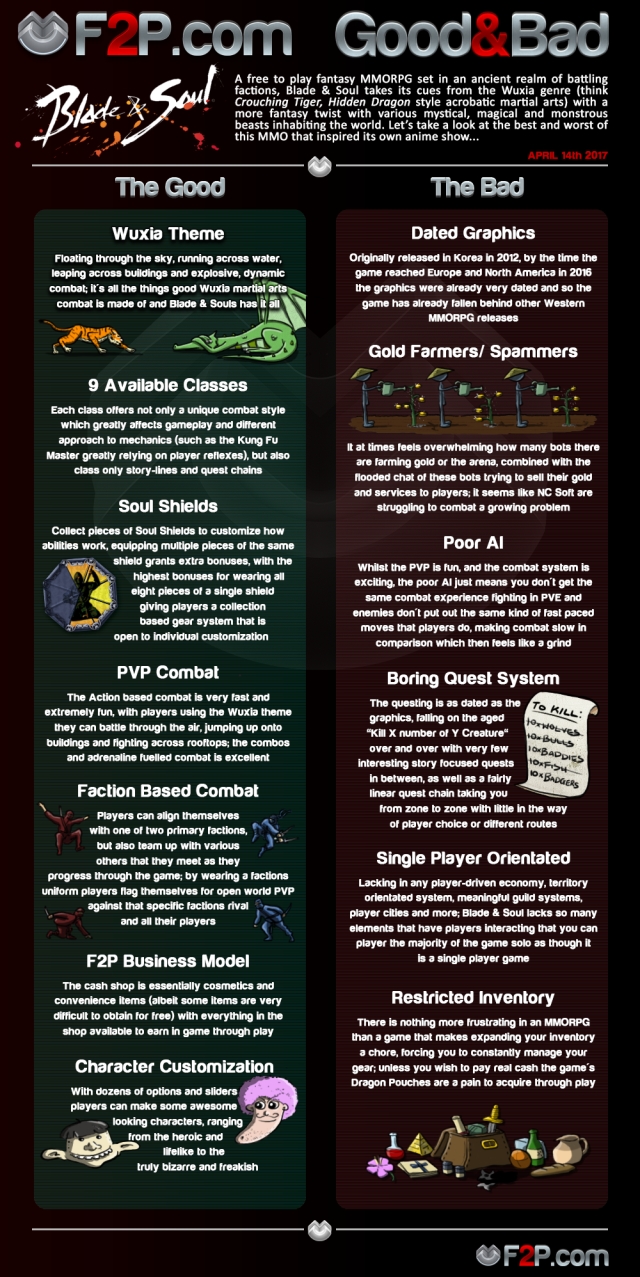