Based on the Syfy television series, Battlestar Galactica Online is a free-to-play, browser-based space combat MMOG that combines high-quality, 3D graphics with intense gameplay. Following a successful closed beta period that started in late 2010, the free-to-play game can now be enjoyed by players worldwide.

Battlestar Galactica Online is based on the acclaimed Emmy and Peabody Award-winning television series Battlestar Galactica, which aired for four seasons on Syfy. Set during the latter part of the shows second season, the game takes the form of a previously untold chapter in which both the Colonial and Cylon fleets are stranded in an uncharted area of space. Heavily damaged and low on critical supplies, both fleets must fight for control of the resources in the nearby star systems as the Colonials desperately search for a way to escape before the Cylons regain enough strength to destroy them once and for all.
A blend of tactical space combat, exploration, and mission-based gameplay provides an engaging experience. For accuracy, assets from the television production have been integrated into the game, including Bear McCrearys original score, select talent likenesses, and a number of ships modeled from schematics provided by the shows creators. 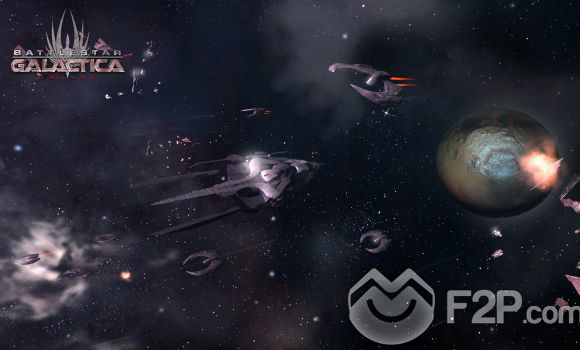 At the start, players select a side  human or Cylon  and then are guided through a series of introductory tasks to learn basic flight controls and weapon systems. Once completed, players can customize their in-game avatars, receive situation and mission briefings, and begin to explore the vast universe. As players gain experience, they can unlock additional ships and learn a variety of skills. Inside capital ships and outposts, players can access the in-game market and customize all aspects their current ship  including weapons, engines, hulls, computers, and mining equipment.