Armored Warfare: The Good & The Bad

Armored Warfare: The Good & The Bad

Armored Warfare is a free to play tank shooter where players fight across modern day battlefields in modern armored vehicles. In a popular tank game genre, let’s see what Armored Warfare has to offer lovers of these titles as we discover the best and worst of this team based game.

Great Graphics -Developed on CryEngine the visuals in the game are simply stunning, with highly detailed tank models, destructible environments and realistic battle effects from smoke to explosions; the result is an extremely immersive tank game experience

Modern Setting - A refreshing step away from the more traditional WW2 tank games, Armored Warfare has a modern setting with its story and battlefields and a host of vehicles from the 1950s up to present day, as well as some possible near future-tech vehicles

Plenty of Tanks - The game has dozens of vehicles available to unlock, divided into three different factions that players must earn Reputation for each to gain access to higher tier vehicles; vehicles are broken down into five different classes to determine their strengths, weaknesses and role on the battlefield when part of a team

Customization - With a wide variety of retrofit components to add to a tank, options for crew, and different ammo, each tank can be customized to a player’s own preferences and play style to offer a different combat experience

Global Operations - A dynamic PVP match where players have multiple objectives and points of capture that can trigger events across the ever changing battlemap; players fight against an opposing player force, neutral and enemy AI opponents, and even hindering weather conditions that add a unique element to the battle

Development Issues - Initially developed by Obsidian Entertainment the game was taken over by Mail.ru and things have struggled ever since; many seeing that the new developers were happy with the unfinished state the game was received in (even if players weren't) and haven't done enough to fix big issues

Not Enough Game Modes - PVE has multiple missions across various maps, but PVP has the standard 15 vs 15 mode (capture enemy base or kill all the team), as well as the Global Operations PVP mode (that most NA players can't get enough users together to actually play...)

Dying Servers - Few efforts seem to have been made to push the game in NA/EU regions (outside of CIS territories) and the result is that these servers have a drastically dwindling population and finding games, particularly Global Operations mode, is increasingly more difficult

Population Limitations - Due to the above problems of low server population outside the Russian server (mainly US), it means players are restricted to the modes they can play (being heavily forced into PVE co-op), the tiers of tanks they have to play in to get a game, and the times they have to play for "peak hours" and scheduled events

Tried to be World of Tanks - Whilst the initial conception was trying to be different from the biggest competitor, World of Tanks, through the development cycle the game was pushed more to simply being a World of Tanks 2.0 knock-off offering many similar elements and cutting out more innovative features talked about and promised during Alpha testing and beyond 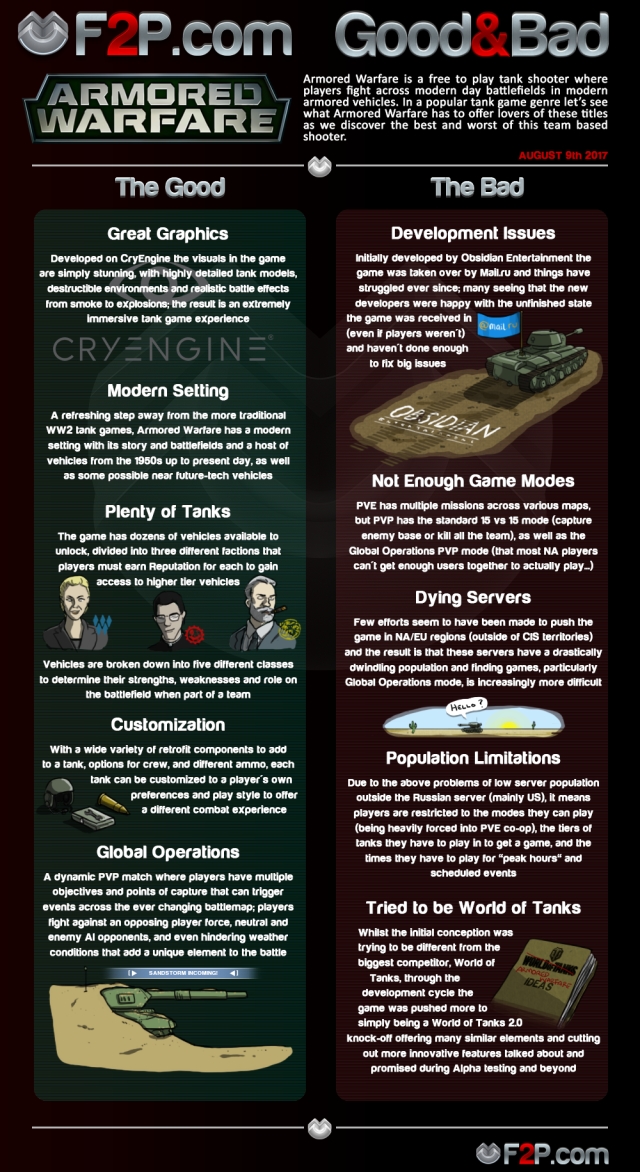