Soldiers Inc: The Good & The Bad

Soldiers Inc: The Good & The Bad

Soldiers Inc is a free to play multi-platform strategy title from developers Plarium. In the game, players must build up a black ops site in a war torn post-apocalyptic world, improve structures and defences, train a military, and battle against other players in PVP.

Let’s check out the best and worst of the game.

Decent Graphics - Although the graphics teeter on that balance between "retro" and "out dated", the level of detail on the maps is actually quite impressive and does help to capture the feel of a war torn area quite well

More Involved Early Game - In comparison to a lot of Plarium games there is a bit more to do in the game with a wider selection of buildings from the onset, more interesting story focused missions and seemingly quicker access to some other game features

The Soundtrack and VOs - Ambient and atmospheric, one of the better parts of the game is the music score composed by Jesper Kyd (Assassin's Creed, Darksiders 2) combined with a fully voiced Mr Black to guide players through the game's missions

Multiple Platforms - The game is accessible on multiple platforms, from PC/Mac browser, Android and iOS mobile platforms and even Facebook integration through the flash site or Facebook's own Gameroom platform

Heavy Reliance on Co-Op - Whether friends met or recruited into the game, or allied "Combines" (clans), players will need other players to get anything done, from helping boost each other to simply fighting in co-op battles and defences against other Combines

Plarium's "Formula" - Other than a different theme/setting there is generally very little separating one Plarium strategy MMO from another; using the same "formula" in each game with the same features and mechanics, it means there is very little change between titles

Overshadowed by its Sequel - With the release of Soldiers Inc: Mobile Warfare it has further compounded the fact that Soldiers Inc is becoming a dated game and needed a fresher start to keep up with more current browser MMOs

Buying Advantages - Dress it up as "pay for convenience" as much as you like. there is a definitive pay to win element to Plarium's business plan and players can buy any missing resources, tech advancement, premium military units, VIP status for boosts and anything else imaginable to gain advantage over other players

A Waiting Game - Everything players want to do takes time, from minutes in the early days to days, weeks and months in the late game; the result can feel like a never ending grind watching completion bars slowly fill up in order to progress

Heavy Reliance on Co-Op - For a mobile accessible game many players just want to play casually and play solo, which becomes a major limitation later in the game and keeping up with other players of a similar level almost requires working with others; which won't appeal to everyone 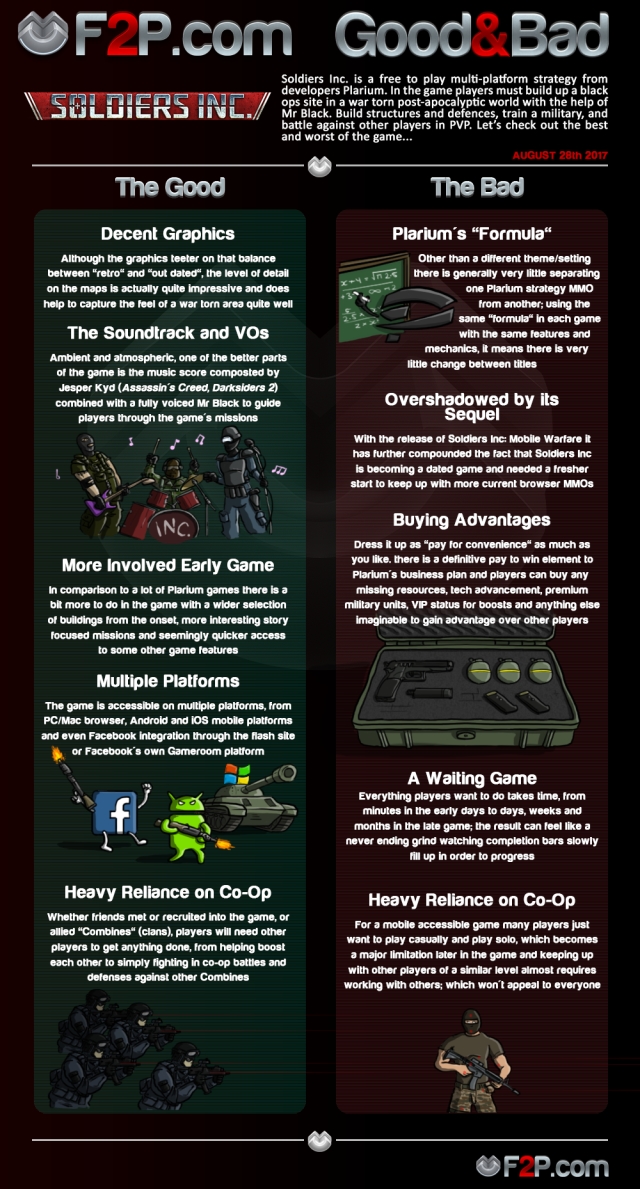