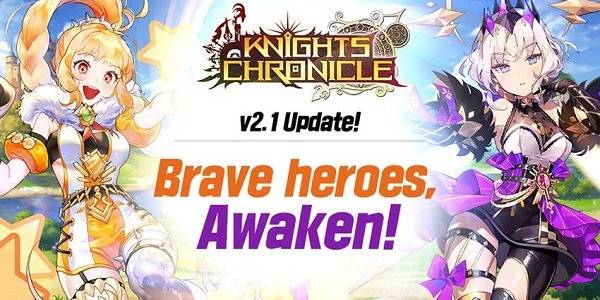 Netmarble Corp. released an all-new update for the anime-inspired mobile role-playing game (RPG) Bless Unleashed that expands upon the new Awakening mechanic introduced in the previous Season 2 update for the game as fan-favorite heroes Ruby and Esna can now be awoken for greater power.

By utilizing growth materials and a six★ version of either hero, both Ruby and Esna can become even stronger with increased statistics, a new Awakened Passive Skill upon achieving the maximum Awakening level, and a new in-game appearance. Players can also enjoy Knights Chronicle’s new story adventures on the Ancient Race, the Dryans, with the addition of a new Dryan hero to collection – Tarkus. To celebrate this new update, players will receive a free ★4 SSR hero ticket and 200 crystals for logging in for seven days.

Other additions to Bless Unleashed include vor this v2.1 update:

• Apocalypse Level for Nina’s Advent Dungeon – Starting today, players can fight against the SSR-grade heroine Nina’s special Advent Dungeon with Apocalypse difficulty level and use only half the needed stamina for two weeks.

• Arena Contents Update – The arena’s recharge period has been extended from 10 minutes to 30 minutes, which will reduce the players’ burden.

Bless Unleashed features classic turn-based role-playing gameplay, a beautiful Japanese animation-inspired art style and a compelling story showing the same standard of quality as console and PC RPGs. The game also sports standout features, including real-time party play where players can form parties of up to five players to challenge multiplayer dungeons, explosive 3D-animated skills that demonstrate the game’s flashy and gorgeously detailed visuals, and over 100 heroes for players to choose from.