Often slow pace of combat in comparison to other MOBA, multi-tasking Commander and Armies may be too much for some players

This week we took a little extended time to check the new Alpha stage MOBA from Namco Bandai, Supernova, a futuristic theme team based PVP strategy using a lot of traditional MOBA features and mechanics and adding in their own twists and turns to try and stand it out from the crowd. Taking a few hours to check out the game in a little more detail we put it through its paces to gauge some first impressions and to see whether the game is going to just be another one of many MOBA out there getting lost in the crowd or whether it does actually have anything that will make it stand out from the crowd.

So first things first; what’s the same? Well it’s still going down a typical three lane five-a-side battle, dotted along the lanes are the expect turrets that will fire upon players and waves of minions, though in the game they are called Armies as they are a big enough feature in themselves to warrant their own identity instead of being viewed as the same as lane minions from other MOBA; but we’ll get into that. Players currently have 12 different characters, or Commanders, to choose from that are divided between two main factions: Humans and Cyborgs, which have their own stats, facts and figures and key roles: Tank, Assassin, Sniper, Brawler, Caster and Support. So far everything is pretty familiar right? Well you’re not wrong, there’s nothing at the offset that strikes us as being massively unique and when we say they’ve gone traditional they’ve really gone traditional, the game focuses on player skill lane pushing and mixing up objectives by taking camps between lanes in the “Jungle” (though the current map is an alien desert planet so not particularly jungley). 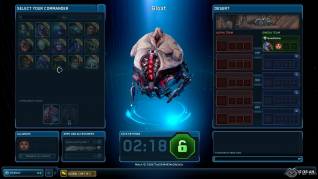 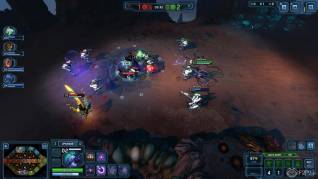 The camps are a little different in places, taking them out will give players extra resources and XP, and some camps can be claimed by destroying the occupants and sitting on the point to capture it to reveal portions of the map, with the main camp offering up a controllable boss robot when beaten, so Jungling is still a viable tactic in the game. It’s not overly obvious what you get from camps at first and takes a little playing around with until you work out just what benefits jungles provide providing you are strong enough to take them.

The power level of the Commanders in Supernova don’t necessarily feel like you can obliterate other players with some good initial strikes, the movement is quite slow and plodding, frustratingly so if you pick one of the slower Commanders, whether a part-machine Cyborg or walking around in a huge armored walking tank as a Human. Unlike other MOBA where there are some truly devastating heroes/champions who can obliterate you in seconds if you’re caught out of position, we never witnessed that or got the impression it was something likely to happen. To be fair we did get off to a bit of a bad start and for a while our opinion was quite skewed, having recently been playing for action packed short game time MOBAs the slow pace of Supernova became quite a chore; our first PVE tutorial games as a 58 minute slog pushing a single lane constantly whilst we learned the ropes.

The slow movement makes getting across the map a bit of a drag, however, for the most part you do have access to your “Evacuate” skill that will call a mini ship to come and pick you up, providing you can channel it for 10 seconds, and then will fly you quickly back to your base. Here as well as healing up and refreshing energy players must come to spend their acquired Attribute points to increase their speed, attack speed and power, armor, health total, etc. as well as spending Mastery Points gained for every 5 Attribute Points acquired. Mastery enable a little extra class specific boosts and traits to define the character a little more outside of their typical QWER skills. When you’re ready to get back into battle then you have a handy Deploy skill that can be targeted on an ally troop, player or turret; ideal for getting you to key places in the map in a pinch but does have an extremely long cooldown.

Giving the game a chance, putting aside some of our first impressions, we came out on the other side, and once we’d learned about a few of the other features things got a little better, but unfortunately as the Alpha testing is quite restricted there just weren’t a whole lot of people around to get a PvP game, waiting over 15 minutes sometimes, and so our experiences pretty much came down to battle the AI (who were a little hit and miss). Some of the nice little additions are the ability to customize your Commander with traits as well as picking up Allied Abilities that you can use in your team, new ones are acquired/unlocked as you level up, so the general customization of Commanders is actually pretty extensive; both pre and during the game.

The crowning gem and pretty much the singular biggest change with Supernova in comparison to other MOBA is how they have handled lane minions or, as we said earlier, Armies. In most MOBA your lane minions are just standard critters that spawn in waves at your base, slowly make their way down their respective lane and fight whatever they come across; whilst you have to be conscious of their condition and progress you don’t take that much active involvement in them. In Supernova each player controls their own Army and are responsible for the units that are included in a spawning minion wave, each player can unlock a variety of ground, tank and flying units of various qualities by levelling their account and in game players must acquire and spend resources to put these units in the field. Each unit type will have a direct unit that it is strong against and one that it is weak against and players can trade in and out their units based on what the other team is also spawning and how well the two waves perform against each other in its own info window. The whole Army feature really adds in elements of tower defense meets RTS and given the setting really gave us that StarCraft II vibe. Working out what you want, what will benefit you, whether you are going to be in the same lane as your Army or use it to bolster another ally, it all adds a lot to the meta-game and another layer of strategy. 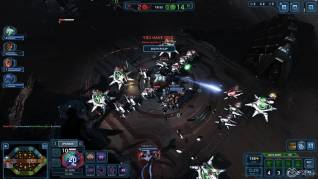 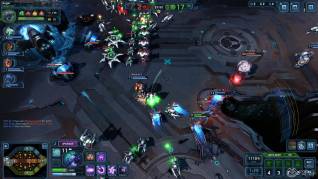 All of that said, and whilst there is an “automated” setting, it is quite involved and many players are likely to strong with the type of multi-tasking needed, not only forcing players to have a greater idea of unit presence and success across the entire map, but also heading in and out of other screens away from the game to quickly check over their wave performance. The actual process of selecting your units is extremely easy and purchasing them isn’t complicated, so players can simply buy whatever they can afford (up to a cap for each player, with each unit taking up a certain amount of points towards that cap) but being strategic and tactical in an ever changing battleground where your strategy must constantly shift is as likely to put off as many people as it does excite.

Overall the game looks pretty amazing and the music and sounds are well done, though one of the female voice overs constantly shouts “Leeeeeroooooy Jenkins!” and another comments “Well that escalated quickly” and honestly, whilst these popular memes made us smile at first, after hearding them for the twentieth time in an hour long match it does start to grate on you. The core of the game is fun, if a little slower paced than we like, but it is definitely the Army feature that is going to make or break the game and whether the community rallies around it; at its core it’s a good game with some interesting features and is definitely one to keep an eye on.