Maps get a little repetitive as the game lengths are so short, you can sometimes die seriously quickly and can’t leave the match without getting item damage

Crossout, the new post-apocalyptic vehicle team deathmatch MMO, is currently in Alpha testing and we got free access to check the game out and give it a spin around a few desolate wastelands, whilst still in early stages the game is well polished, has plenty of content and should be enough to keep gear heads and competitive players happy. 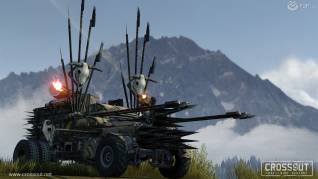 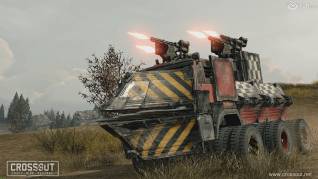 When first loading the game up we were taken straight into our Garage, our own personal building haven that was part of a much larger camp territory that we controlled (but more on that later), sat in our depot was a beaten up old truck type vehicle with a few machine gun turrets fastened to it that was to be our starter vehicle. Having a little play around in the build mode we got to edit and rebuild our vehicle, moving parts around every vehicle piece has connection points that can be used to link them to other parts; though some components such as wheels can only be linked to a frame component, which makes sense. Other pieces such as armor plating or weapons could be affixed to pretty much any surface seemingly and allowed for a lot of creativity, essentially this was a post-apocalyptic, more violent version of the lego machines we used to make as kids when we made our huge battle robots.

There are hundreds of pieces that you can either earn through completing missions, trade or craft, and how you combine them adds for almost infinite combinations with the result being some really crazy looking vehicles roaming around the battlefield. There are limitations to just what you can create, primarily with the TEC and Energy costs; TEC is the definitive limitation where players start with 310 TEC and every item/piece of your vehicle has a TEC cost, so you can’t go beyond your threshold. Frames, wheels and the more cosmetic aspects obviously have lower TEC costs, but as everything gives some form of benefit then they do still have one, but weapons, fuel tanks, car jacks and other supplements have much higher TECs so players need to be choosy about what they’re making. Energy is based off your battery, anything that is a mechanical component and not just a frame, armor plating, etc. will drain the battery of the vehicle, so vehicles can only have so many of these types of item or they need to upgrade their battery. 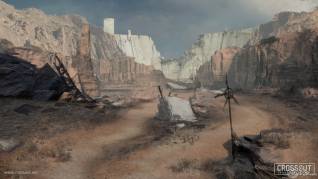 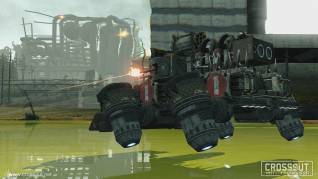 Early on your lack of components, resources and crafting options limits you in what exactly you can make, and getting “creative” can usually result in your own downfall if you don’t pay attention. For example we cut the back end off our truck and basically had 4 wheels attached to the cab with guns thrown all over it, hoping it would be small and mobile… but this wasn’t the case. From your garage you get to Test your vehicle, driving it around an instanced based area you can see how it drives, how well it takes a variety of ramps at different gradients, as well as how armored it is by firing at a stationary replica of our own vehicle. With our cab on 4 wheels we hadn’t quite accounted for how heavy it was in the rear, so as soon as we accelerated or hit a bump we were riding on the back two wheels and then ultimately lying with all four sprawled on the floor (not a problem as we had a Car Jack that self-rights the vehicle). Our second attempt was to extend the chassis and put some bigger wheels on it… unfortunately we hadn’t put any steering/turnable wheels, so whilst our vehicle was fast off the mark and didn’t tip backwards, it could only go in a straight line. As we said, you can be creative but it takes some practice.

The crafting portion of the game falls in line with your Camp, a handful of buildings (Marketplace, Residential, Garage and Workshop) which players can upgrade using their acquired scrap, the main currency/resource used in the game for pretty much everything. Upgrading these buildings gives different options, allows you to hire more Crafters, increases your TEC allowance on your vehicles, gives you access to more missions to earn free items. The Workshop and subsequently the Crafters are vital to the crafting element, each Crafter has a variety of items that they can make, though players can learn new schematics as they progress through the game. It’s a really simple to use system but fun, you need to craft every component you might want to use, but can just keep them in storage if you want to, so if you want a fully armored truck then you need to create each small individual armor plate. 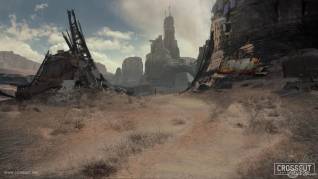 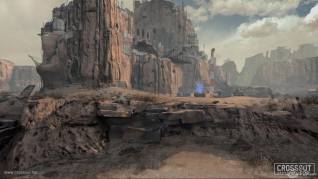 Vehicle created we headed off to the battlefield! The games are all team based deathmatches that require you to capture the enemy base by positioning your vehicles in a certain enemy area, or simply destroying all the enemy vehicles. The battles are pretty brutal, every component you put on your vehicle can be shot or smashed off, weapons, armor, frames, wheels, you can literally be a chassis sat in the middle of the battlefield with no wheels, but still unleashing machine gun fire trying to take out the enemy until your cab is destroyed. If your car is flipped on its roof or side then you’re pretty much immobilized, as mentioned you can have a car jack component to self-right, or you can wait for a friendly player to come help you as your icon shows up on the minimap telling players you need flipping.

The battles are fast and fun, but they are very short lived sometimes. This may be more because we were new players, so lacked durability and armor, but there were times that we could be in a battle and blown to pieces in the first 30 seconds and then have to sit around for another two and a half minutes waiting for the game to end. We had to personally grit our teeth and bare it playing with a team nearly fully compromised of AI, because the AI is generally pretty dumb and if you are unfortunate enough to die then by mouse clicking you can switch cams to watch the rest of your team, usually finding half of the AI trapped in a tree or flipped upside down, so the further into the game you get, more players, more durability, more customization, we definitely see the game getting more interesting. However, whilst the maps are of a decent size, and there’s quite a few of them, due to the match lengths being so short you do cycle through them all pretty quickly and we feel that’s going to be one of the major issues with the game, that playing the same maps so often is going to get a little boring after a while.