With all the new MOBA games that are being released these days, this seems to be a really flourish period for this genre; often they are just clones of the most successful titles, but sometime a title come out trying to innovate it with a breath of fresh air. The last one in this category is called Panzar, is a free-to-play fantasy title with action combat system, and is coming from Russia. We've had the chance to try out the game and it was a pretty unique experience if compared to the usual MOBA style games like League of Legends, DOTA or Heroes of Newerth. 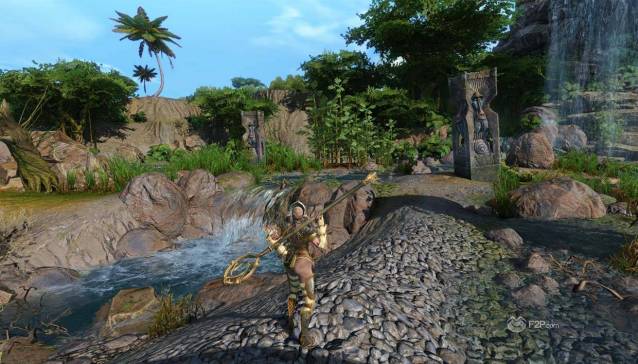 Upon entering the game you will have to choose your first character. We used the word "choose", because just like in a regular MOBA, there are different characters to choose from, without any chance of customization. Right now, the available champions are: Tank, Paladin, Sapper, Sister of Fire, Inquisitor, Berserker, Ice Witch and Gunner. Even just from the character selection screen you can get the game's general style, which differs a lot from the cartoonish style of LoL and from the Anime style that characterizes a lot of modern MMO games. Panzar features a brutal and dark artistic style much closer to the Warhammer's one. Orcs are ugly and scary, dwarves aren't sexy at all, and blood is common as water. If you are looking for big cute eyes and shining items, this is the definitively the wrong place to look for.

To start our adventure we've chosen the Inquisitor, a dual-wielder assassin style human character with high DPS and a stealth skill as starting ability. As you can see, in Panzar you have to select your character (you can have different ones) before actually entering the game, and there won't be a selection screen before each game. This is because one of the Panzar's features which distinguish it from the other MOBA is the permanent RPG-style character progression. Instead of leveling up and equipping itself during a game, your character will gain experience points, money and resources after each match, and you can use them to buy/create new items or obtain new skills, just like a regular MMORPG. After the character creation you will be brought to the game's main screen, which is pretty standard and intuitive. Besides the usual buttons for the shop and the premium features, you will have different other tabs: Character, Forge, Shop, Altar, Fitting Room and Social. In the Character screen you can see your see your character and go to the character selection screen. In the forge you can upgrade the already owned items and - assumed you have the correct recipe - create new ones, such as potions and gear. The Shop is where you can buy new items, and the Altar is where you unlock new skills and build your character. In the fitting room you can customize the aesthetic of your character with new dyes, haircuts and more, and in the social tab you can manage your friend list, your clan and tournaments.

The strange thing is that in order to enter a game, you just have a big red shiny "play" button which will instantly queue you for a random match, and that's all. Right now you can't choose the map or game mode, etc. And this is quite annoying for a game with tournaments and which probably aims to become an e-sport in the future. 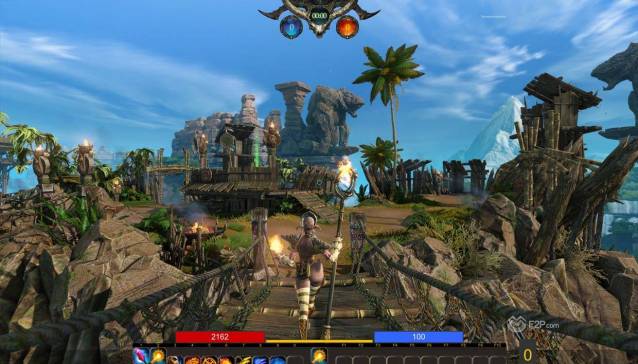 We have absolutely no complains about the game's visuals. As soon as you enter a game you will realize how gorgeous the graphics are, aided by the CryEngine 3, which offers amazing and detailed 3D models and special effects, impressive animations and shadows. It's definitively a pleasure to look at the water, the spell effects and the excellent use of the physics. We are without doubt above the standard of the usual free-to-play game, here.

The maps graphic style is something worth mentioning too. With the exception of the coliseum-style arena which is honestly boring an uninspired, all the bunch of maps offered by the game are well realized and unique when speaking about graphics. Too bad most of them are really small, we would have really appreciated some more variety in level design.

The sound effects are enjoyable too, and while they are nothing really impressive, they do their works very well, capturing the feeling of what you would expect to hear in the heat of the battle, like the clash of steel and scream of rage and pain. 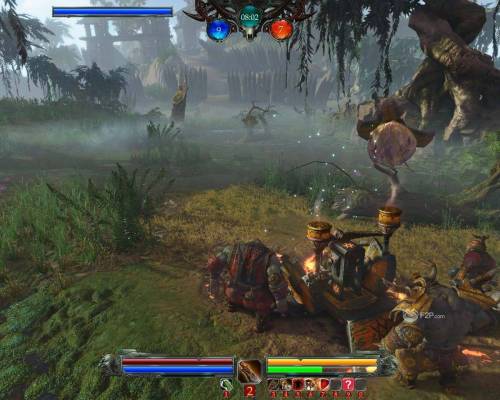 This is the part that makes the game truly unique and totally different from your usual MOBA. Panzar is played in a "above the shoulder" third person view which is extremely similar to the one seen in TPSs and some action MMORPGs like RaiderZ or Tera. The combat system is completely action and extremely simple and intuitive. It uses the typical TPS WASD + mouse combo to give you maximum control, the left click is bounded to the standard attack, the right click to the power attack, you can use Ctrl to block and reduce the damage, shift to sprint and space to jump. Moreover, you have the unlocked skills on numeric hot-keys just like in a regular MMORPG. It's really easy to get used to this system and if you've ever played a TPS or an action MMORPG you will feel at home. We have to say that this system it's extremely fun and addicting, and you will have to react faster while keeping an eye on the action to help and support your team while slaughtering the enemies.

The classic match in Panzar consists in capturing one control point at the center of the map. The maps aren't that big and often the match will just became a big brawl in the middle. However, usually you have different heights, passages and points to use for cover that will allow the use of different tactics and playstyles. Moreover, the bigger maps have tools, devices and traps that you can use to gain an edge, such as exploding barrels, rolling wooden logs and more.

By playing with our Inquisitor we realized that we had to play it in a particular way to be successful. Just charging in the middle of the fight facing berserkers and tanks usually resulted in an almost certain death. We had to learn our role in the battle and how to take the best advantage of our character's strong points, using the stealth skill to arrive behind the enemy casters, gunners and squishy characters and take them down quickly. 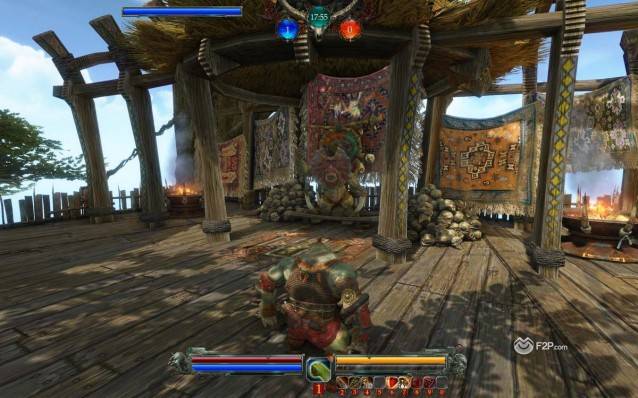 This made us understand that actually every character has to be played in a different way and has a precise role in the team. Just like in every other MOBA, collaborating with other players is extremely important in order to win a match.

Panzar is something between a classic MOBA and a TPS, and features a classic MMORPG progression. The game's graphics are gorgeous and absolutely amazing, but the game feels a bit incomplete and lackuster in some aspects. There aren't so many character for a MOBA game, and each character has to be leveled individually, so if you get bored and want to try another class, you have to start from the beginning. Moreover, there is no way to create a customized game, choosing maps, limit of players or anything. The best part of the game is that matches are quick and entertaining, and the combat system can be extremely addicting. If you are looking for something actually fun to play that can be enjoyed even in short breaks, Panzar can be a nice surprise; just don't expect the PvP game of the year, at least until developers fix something here and there and enrich the overall experience.