Too much presumed knowledge as if designed for One Piece fans, repetitive early content

We recently took the time to check out the new manga themed MMORPG OnePiece Online from Joygames set in the world from the popular comic series and anime, where we join the main protagonist Luffy on his search for the largest stash of treasure in the world: the One Piece. The game is a browser-based free to play classic RPG where players will choose from one of three different classes, complete a variety of quests, acquire new Partner companions to join them and work towards increasing gear and stats as players level up.

From visiting the games web page we could sign up an account without any issues. Upon logging in we had three classes to choose from, each accompanied with only a single line of text to describe the basics of what the cost did: Sniper (long range), Swordsman (melee) and Devil Fruit User (ranged caster). Intrigued by this Devil Fruit User we made our choice, with no character customisation options and the single character / class avatar we jumped into the game.

Straight away it felt quite obvious that the game is meant for any fans who enjoy the One Piece manga comic/anime as the way places, people and organisations are casually mentioned indicates that players are ready expected to have some sort of familiarity with the series’ lore and main story lines. Popular in Japan (and beyond) everything about the game tells you it is an Asian import from the staple RPG features to the pretty awkward and at times bad translations into English. Added to this was the classic automated system; other than clicking the confirmation button when NPC’s asked us a question, everything else was automated as we ran from NPC to NPC. At one stage we reached an NPC and no matter how much clicking we did we couldn’t seem to get past them for a good minute or two, eventually we got a network disconnect error that told us we’d lost connection with the game (it is beta after all).

Combat was another pretty automated affair. As you jump into the instanced battle you are told you need to defend your pirate flag from attacking enemies that continue to spawn, your flag having hit points and so can only take so many attacks. The actual victory conditions were a little unclear as the mini map shows a flag at each end of the map and whilst there was definitely our own flag where we started when reaching the other end there was no flag to be found. We can only presume that the maps indicate this due to PVP at later levels where players may have an enemy flag appear. Players have the option of moving around manually with the mouse and making their handful of attacks, if you don’t touch anything then the AI will automatically control your character and given that in the early days you are always so strong we literally didn’t need to touch the keyboard. The combat element may be more interesting in PVP, but we were unable to experience it at such early levels.

Once you successfully defeat the Challenge your performance is ranked in three stars and players gain a chance to turn over one of five cards, each with an amount of bonus XP that you can earn from 200 XP up to 500 XP max. Either the system is broken, skewed to make players think they’re awesome or we’re incredibly lucky as from roughly 10 challenges we played we turned over the highest 500XP card every time. 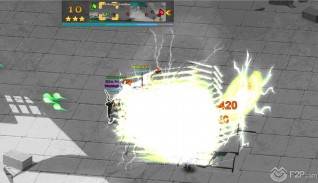 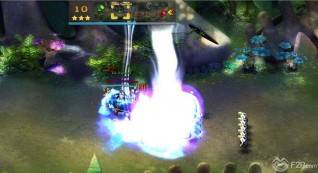 As we levelled up we unlocked a handful of features including the Tavern where we can try to gain Partners, companion characters that join your team that you can put into a formation and battle with in the PVE quests. Some higher ranked Partners have their own abilities when in battle whereas the standard Blue Partners use a Fate system where their abilities only appear when they are paired up with a specific character or piece of equipment.

The first 20 minutes of gameplay were pretty much the same, we reached a point where we had to choose a Camp (presumably our faction), with very little information as to what each Camp offered we were simply told that our choice was permanent; whether this changed our storyline or anything like that we have no idea. Overall the game looks great but plays like many other RPG’s of this genre and has simply not enough interesting content in the early game to keep players interested unless they love these type of games.