This past weekend we checked out One Piece Online 2: Pirate King, the free to player browser RPG from Joy Games, sequel to the previously released One Piece Online. The game revolves around the manga anime of the same name, One Piece, following the adventures of the loveable aspiring wannabe pirate king Luffy and his motley crew in a fantasy world where the tyrannical Marines rule the waves.

The format is very similar to a lot of team building MMOs with the typical features and mechanics that fans on this genre will already be familiar with and, as it is an Asian MMO, have no doubt come to expect. Not short on bells, whistles and flashing icons the UI grows ever more cluttered as you level up, unlocking new features and having new icons appear constantly, always an odd choice as far as we’re concerned given that after ten minutes of play you’ve unlocked a lot of the features anyway we don’t know why they’re not just all added from the beginning. 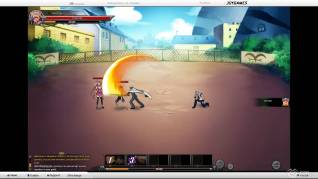 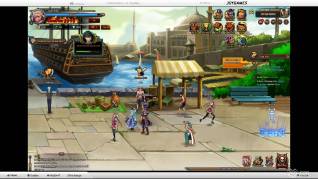 Levelling is XP based and primarily comes from completing the quest chain, a linear story that takes players from one location to the next as they slowly meet the extensive number of cast members from the show who will help, hinder or join them on their journey. The story-arc is a series of quests one after the other with no deviating, meaning there is zero replay value as far as we’re concerned, once players reach max level we’d be surprised if many would both to restart the game to try out one of the other four available classes. The classes are Sailor, Dark Mage, Sniper and Doctor, though as you might expect from these types of RPG there is very little difference between these characters insofar as how they play; they have different stats and their abilities have different effects, but essentially you put them in the appropriate position for your Crew and then surround them with other NPCs that you recruit.

Meeting NPCs is probably the driving factor behind the game, fans of the show are no doubt excited by the idea of adding Luffy to their crew (who as the main cast member actually joins your crew early on and is your first companion) and essentially that is no doubt the main appeal to the game. The storyline is fairly shallow and doesn’t so much seem to have its own narrative but instead just recycles elements of the shows plot, going into particular detail about introducing each NPC character that you meet and what they do in the world of One Piece to firmly establish that “yes, this is the same character you know and love because they just said some token piece of information that you’ll remember from the show”. It feels like a game designed for fans without really adding much of a new story for them, more so it’s obvious it was designed for an Asian market as the English translations are just terrible; from spelling mistakes to stilted dialogue it is so bad that it’s almost comical to read at times. 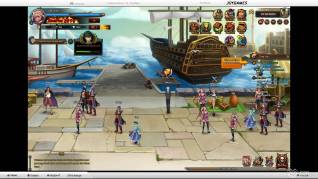 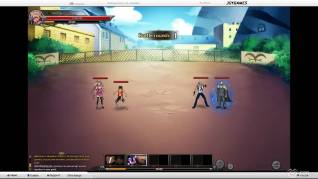 Even worse than the game seemingly just following suit of the TV show, it actually feels far too similar to the previous One Piece MMO including the fact that you start the gaming meeting “Red Haired” Shanks, a notable legendary swordsman, and then going straight on to meet Luffy and fight some Marines in your bid to find Gold E. Rogers lost One Piece treasure and become the next Pirate King. Many of the mechanics in the game are the same, combat remains relatively automated, however there is a lot more control in One Piece 2 where instead of defending you flag from the enemy it is an outright battle between your team and the enemy. Players have more control over who they target in battle, playing to their individual character and crews strengths, able to focus on an individual target or spread the damage around.

The graphics are decent enough, but we have to say we do prefer them in the original, the style in the new game being much softer and blurry and lacking the detail of the previous game. As ever players run around the world all looking exactly the same; there’s no physical cosmetic difference between one Doctor class and another, whilst players can get new gear their outfits always remain the same and the only difference is the character’s name.

As far as these types of team building RPGs go One Piece Online 2 is far from the worst of the bunch, but not quite the pick of the litter either, where it excels in some areas the overall production value generally lets itself down. The wooden storyline is disjointed for those unfamiliar with the show and feels like the facts and info are being delivered in a very ham fisted way, for players who are fans then it doesn’t really add anything new. Far from being a genre defining the game it is overall a linear experience to max level and the same content over and over trying to top the PVP leader-boards and an endless cycle of trying to increase your Battle Power. Whilst there are plenty of Crew to recruit and a variety of combinations and strategic choices, there is a lack of unique endgame content to keep user entertained as even the various features unlocked are still very similar to each other in gameplay.