Magic the Gathering is an involved and compelling TCG system, helpful deckbuilder wizard.

No discount incentive on buying Booster packs, lots of problems with connectivity, no chat system for co-op mode, not a lot of cards considering how many physical versions are available.

Wizards of the Coast and Stainless Games recently released their newest free to play MMO from the Magic the Gathering franchise; Magic Duels, originally released on iOS devices the game has now been released for Windows through Steam. True to form the game dishes out a variety of game modes, hundreds of cards and lots of the same familiar elements and gameplay as seen in their other titles and physical trading card game. We took out some time to try the game out and see what we thought about it, in all honesty we have mixed feelings.

To start with it had possibly one of the worst game launches of any game we’ve played, and we’ve played a lot. For the first week pretty much the game has had “server issues”, as documented by the community and acknowledged by the developers, so it was at least a problem that was being dealt with; the result was random disconnects to the servers (so you can’t play against players), crashes with the questing (so couldn’t complete them) and constant desyncs. It has been a mess and for anyone picking up a Magic game for the first time it’s the kind of thing that would make you head back out the way you came in and try out one of the myriad of other TCGs out there.

So bad launches aside, what were our first impressions? Well firstly it’s obvious the game was designed for mobile/tablet first given the basic graphics and huge buttons, in the client it just looks quite ugly lacking the detail and finesse of other TCGs (Hearthstone, Hex, Might & Magic: Duel of Champions); with the amount of money these games bring in (Stainless Games have developed most of the Magic online games) you’d have thought they could spring the cash for some different variation of graphics between platforms. The music score is good, but repetitive and sound way too much like a few choice Game of Thrones tracks for our liking; though one of the things we did feel really could have been implemented was some voice acting with the Story-mode quests; there’s quite a bit of narrative (not so much it would be a huge undertaking) but the developers have chosen not to enhance the experience. 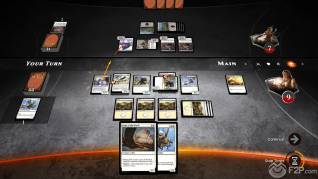 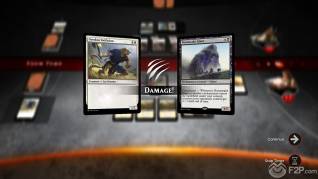 As a new player to the game, but someone with quite a bit of familiarity with TCGs, we have to say that the tutorial was quite painful and way more detailed than it needed to be. Whilst TCGs can be complex creatures the game constantly wants to pull you into side missions to teach you about every new ability type when they first appear (Flying, First Strike, Vigilance, Trample, etc.) and it’s absolutely unnecessary given that every ability is explained in text on the card… if people need their hands holding to get through that “Flying creatures can only be blocked by other flying creatures” then they’re going to have bigger issues in the game and probably in life in general. The mini tutorial quests aren’t particularly short either, an arduous setup of cards then a “Try and destroy the enemy boss!” like the two turns it’s going to take with the extremely singular choices you have is going to be some kind of great challenge (spoiler: it isn’t). It feels like as Magic is a more complex system to other more casual games, such as Hearthstone, that they’ve tried to say “Hey, look, we’re really simple as well!” but just made things frustrating and long. Combined with the turn times between stages, all part of the system but makes for a more drawn out round, the game does have a considerably slower pace than other TCGs, which a lot of people are going to find off putting.

The deck builder isn’t too bad and players start out with quite an extensive range of cards to start making their deck of 60 cards, for new players it can be pretty overwhelming as there a lot of cards to choose from, lots of different abilities, and at this stage most players will have zero idea on strategy. Thankfully there is an auto-deck builder to completely crafter a new deck from scratch, or a pretty nifty “auto complete” feature where if you at least know there’s a few key cards you definitely want to use then the deck wizard will build the rest of the deck around them (how good this is in general we have no idea as we don’t know enough about the system to determine what’s a good deck). 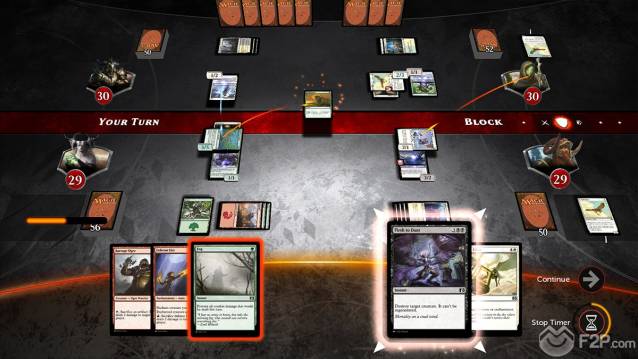 The games story-mode puts us in the shoes of some notable Planeswalkers from the games lore, five of them in total that you must unlock in order, and tells their story as you play five games with each character using cards based on their abilities. With the issues the game has had from launch we weren’t able to complete the first character, constantly crashing on the last boss battle, but even without this the story-mode, other than providing us with a healthy some of starter gold, is generally quite underwhelming. The lack of animation, voice acting or any real depth to the story makes you realise it isn’t quite as pivotal a feature as the developers had made out, the games are all generally pre-determined, at least insofar as the order that cards are drawn from the deck (from our repeated attempts at the last boss fight they drew and played the same cards every time). The biggest issue with this system is that players are provided with a deck of cards for the story mode, to represent the character they are playing as, but you aren’t actually able to see what cards are in your deck beforehand so have no way of making any long term strategy and instead are playing an improvisational “by the seat of your pants” game and simply playing the cards you have as soon as you get them. Some battles are heavily skewed against the player so that it all comes down to a single play at the right time, and if you lose then you have to play the match again, going through exactly the same cards and process… it’s boring.

The other game modes are Battle Mode for ranked play against players or fighting against AI, at this stage there’s not much interesting going on as everyone has pretty much exactly the same cards and, from what we can tell, the ones you get from Booster Packs aren’t much to write home about either (but we’ll get to that…). The other game you have is Two Headed Giant, that allows 2v2 games with players teaming up with each other and fighting each other… in theory, there is a really odd system in place where if a player drops out then the AI automatically takes over… and the AI isn’t that great playing with decks they weren’t designed to play; so if you quit the game you lose, if you play alongside the AI.. you’ll probably lose. However, that’s not even the biggest issue, there are two fundamental problems with the 2HG mode: the game modes have no chat system and you only see players names right at the beginning of a match. So what does this mean? Well if you’re playing with someone else you can’t talk to them period, you can’t strategize, can’t socialize, you’re just hoping they know how to play with both their deck and yours in mind; this is ridiculous. Secondly you only see their name at the beginning of the game, if you look away and they drop from the game and the AI takes over you have absolutely no way of knowing… and you can’t find out by asking them because there’s no chat! 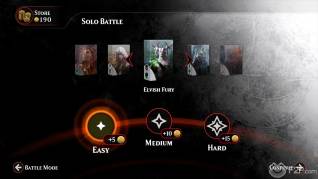 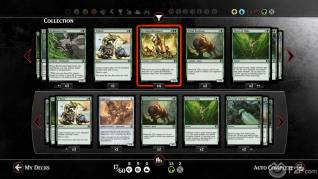 The cash shop. So many things are wrong here. So straight off the bat earning gold is pretty hard, outside of the campaign mode you can’t earn gold from Two Headed Giant, can’t earn it from matches with friends, the AI games barely give you anything. Ranked play is the main way to earn gold, but you only get gold if you win the match, so you can end up in a position where you need gold to buy Boosters to get better cards, to improve your deck, to win games… if you end up a dry streak it can be really disheartening. So getting gold is difficult, but you can purchase it, the funny thing is that you only get 6 cards from a Booster pack (you get more in the physical games, ranging from 8 to 16 depending on the expansion) and dollar per card your digital cards can be way more expensive than physical cards. So you want to buy cards, cool, your started Booster Pack is 150 gold for 1 pack…. 300 coins for 2 packs…. 3000 gold for 10 packs…. seeing a trend? There is no discount for buying more packs (albeit there is a discount for buying more gold) so unless you’re spending cash to buy gold you get no benefit to stockpiling your cash and you may as well always buy a single Booster pack as soon as they become available; which is a shame as we love buying loads of packs and opening them all at once, but without a discount incentive it doesn’t seem worth it.

Overall the game really offers very little that the previous Magic games haven’t, some features have returned (Two Headed Giant) but with some major gameplay issues and at the expense of losing other features. The cash shop is pretty bad and the initial cards you can get aren’t particularly interesting, but we’re sure they’re going to churn out expansions given that the cards we see in game are identical to the physical cards so it’s not like they have to do much to add new cards in. The game falls short in many areas, the lack of basic communication between players is a huge oversight, the game adds nothing new to not only the genre but to its own franchise’ titles and unless you are a huge Magic the Gathering fan we can’t see it pulling in players from other online TCGs.

If you want to know more about this Magic Duels, visit our profile by clicking the "Info" button below.