Some of the artwork is really well done, but lacking in variety. The NPC English dialogue, for an Asian game, is actually pretty accurate for the most part and has successfully avoided the terrible translations that normally plague these MMOs.

Zero gameplay. Too much automation leaves the player feeling like they are watching a video where they just have to click the left mouse button every so often.

We took a look at the newly released League of Angels from developers Uuzu and published by R2Games among others, fantasy MMO RPG that can be played directly in your web browser and lets players roam around a fantasy world where they discover and recruit a variety of Angels to their cause. From the onset your character is pegged as the hero of the land and, as far as the linear story goes, you are essentially the only person that can save existence from the “Dark Lord”. The game itself is a point-and-click MMO RPG where players will fight all manner of enemies, collect loot, complete quests and gain an unprecedented amount of XP. Seriously, they give it away. 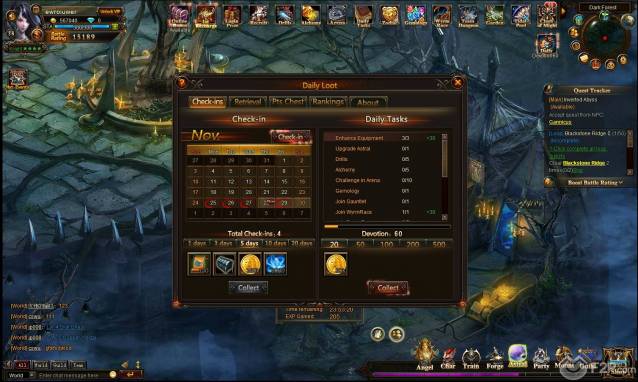 Our journey begins the moment we login and choose our server, transported to some seemingly underwater abyss realm where you come across an angel named Nocturna who is currently trapped and in a weakened state, to free her you are tasked with defeating some dark guardians including some boss type NPC known as Akayla. Player involvement during combat is completely non-existent, combat takes place in an instanced area which requires a loading screen to load up and then as soon as you enter battle the enemy will make their attacks after some dialogue . You then return some automated counter-attacks (we’re not sure at this stage whether you get to select between different attacks) including the sudden appearance of Nocturna who helped you in the battle against Akayla. When we say “helps you” we pretty much mean she kills the boss for you.

At this point you get to choose your class between the warrior or the mage, both of which have premade artwork with a male or female version, with absolutely no customisation and only the option to choose your name. Essentially what this meant was that as soon as we loaded into the game everyone looked exactly the same. It all just felt kind of lazy. 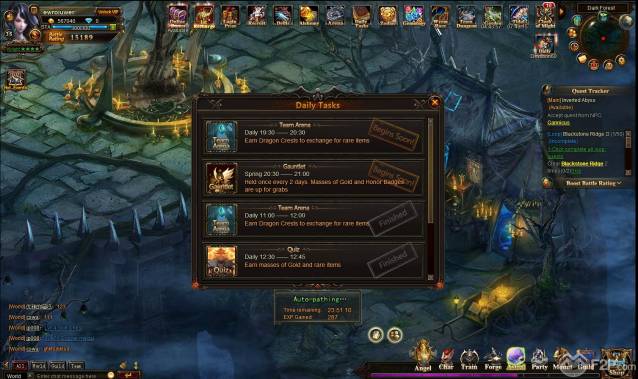 From here we are teleported to the world tree in Elf Village to speak to some Elven high Lady who then proceeds to send or us on some other adventures to kill other enemies. The process is pretty much the same as above, the bad guy attacks as soon as you are close to them, you strike back doing very little damage then Nocturna appears and kills everything on the screen with some “White Lightning”. At the end of key combat battles you are given a score/grade (we got “S” for every battle during our trial, which is the highest grade, but completely undeserved given that we did nothing), and the chance to turn over one of four cards which will either give you gold or the chance to get an Astral Tear, which is used to level up your angel.

The digital artwork isn’t too shabby, both for the character designs and the environments they actually look really good, but even on only our third quest to go to Ashaphs Shrine where we were sent to a new location they used exactly the same environmental artwork that they’d used in the Temple of the Moon quest that we’d done only 5 minutes ago, which again felt like they were cutting corners with the game. Similarly with the music, whilst atmospheric in places there were some noticeable moments where the tracks were short, staggered and looped and, more annoyingly, there were no sound settings to lower the game/music volume, just a simple mute button. 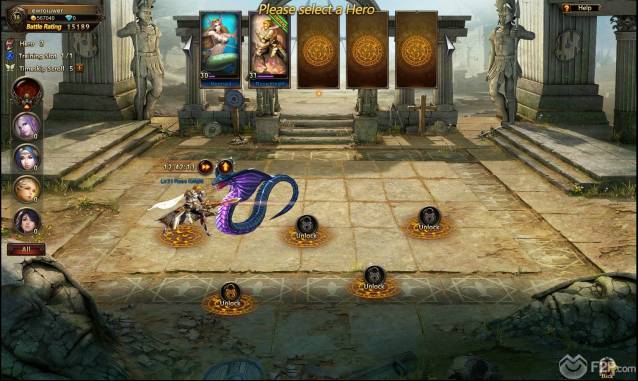 As you progress you unlock new features, but given that we were getting crazy XP thrown at us and in the 22 minutes we played had already reached level 14 it seemed kind of pointless to gate the games features when you level up this quickly. When we took a breather to look at the features the majority of them revolved around giving you gear and loot for continuing to play, probably to make up for the lacking in the game itself. It was difficult to work out all the features as they were literally just unlocked with very little information about them, unlike everything else that had tooltips telling you what to do, even the “left click to continue” message to skip to the next dialogue continued to popup after 14 levels…

Other than the artwork, which is the only real redeeming quality, there was (at least in our test) very little gameplay to actually make us want to keep playing and perhaps test some of the other features. The gameplay revolved around clicking to read the next NPC quest dialogue – clicking a quest in our journal to then automatically run to it – clicking a mob to be taken into automated combat; the whole experience felt like an interactive novel where we were just clicking our way through the story and reading and not actually playing an MMO at all. 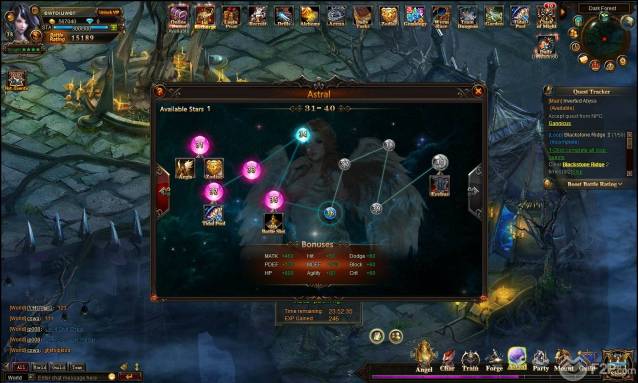 First Look at League of Angels