Almost everyone loves robots, and we are just simple humans like you, so we love robots as well. So when a developer comes up with a game that lets you build your very own robot, customize every single module of your wonderful (or horrible) creation and drive it into the battle against other players' robots, who could possibly resist? Surely not us, and as expected we thought it was about time to jump into Guns & Robots, the robot building MMOTPS from Masthead Studios.

Powered by Unity, the game requires the download of a reasonably sized client. Upon entering the game, the first thing you will face is a quick and simple tutorial that will explain the basics of controls for when you are in battle, how to use the in-game shop and how to customize your robot. You will receive your first machine, a rusty and funny thing, a bunch of credits, the in-game currency, and a few sparkles, the premium currency. 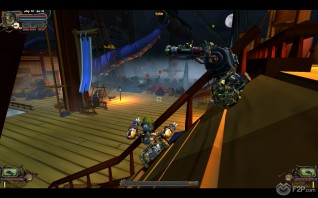 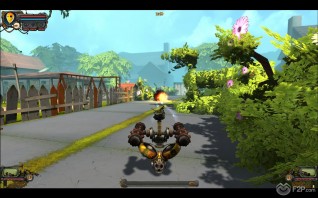 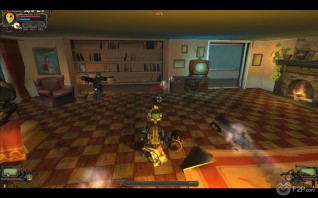 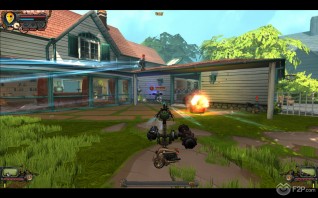 Without hesitation we hit the big red "Battle" button and jumped into the fight. Sadly, this seems to be the only way to play, without the possibility to choose map/modes and other settings (or if it was there, we didn't notice any option or tab), so you are stuck with the random selection. Anyway, the first thing you will notice is the cartoonish and humorous artistic style. Almost every robot part is made out of boxes, cans, recycled stuff, rusty iron pieces and any kind of old appliances and electronic devices, and is designed to be quirky and funny; e.g. you will find chicken-like legs, or a head shaped to resemble a stereotyped old military general, or a hovering movement module which looks like a piranha. This kind of humor is everywhere, including the parts' descriptions, and it will probably make you smile more than once.

The control system is simple and intuitive; you use the classic WASD and mouse combination to aim and move, the left mouse button to shoot with the weapons mounted on the left side of your body and the right mouse button to shoot with the ones on the right side. The shift button is used to sprint at the expense of your battery. As the fight began, we found out - by compulsively pushing the spacebar - that sadly there is no way to jump and the only way to reach higher spots are to take the stairs or find springs, elevators and other ways. The controls are precise enough and the gameplay experience is deeply different depending on whether you are using a light and quick robot or a slow, heavy armored one. A very interesting feature is that every single part of your robot has its individual HP pool and hitbox, so you can aim to a single part and damage it until you destroy it and it becomes useless. Once the total HPs reach 0, the robot is destroyed. That means that you can lose your weapons during the fight, and once it even experienced our chassis being destroyed and we got stuck where we were like a tree without the possibility to move but still able to shoot. Strange, but interesting, indeed. Shooting and sprinting will also use your batteries' energy, which regenerate with time. The maps are usually well designed and filled with nice and funny details, and vary from a suburban house's backyard to a wild west themed mine, an eastern temple and more. There are different game modes as well, like the typical team deathmatch and a sort of steal the flag. 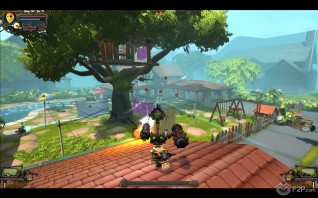 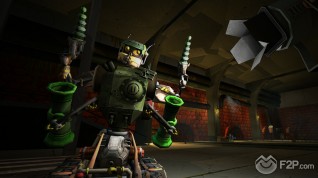 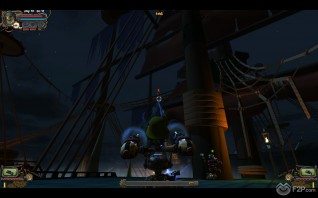 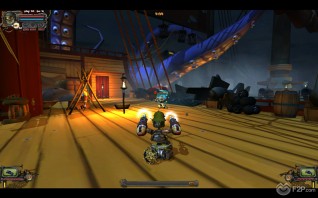 By completing a match and leveling up you earn credits, upgrade materials and occasionally sparkles. You can use credits to buy different parts to build your robot with. Usually, at least at the beginning (we don't know if you unlock more stuff to buy later on) the available essential parts for your robots aren't very expensive and this gives you the chance, with time, to experiment different builds, weapons and robot types. Sparkles are the premium currency, which can be used to increase the number of your inventory slots and can be converted into credits. Robot building is probably one of the best things in the game. You can't just buy a weapon, but you have to create it by choosing the "arm" to attach to your robot and the weapon barrel; same story with the body and engine as well as the chassis and batteries. Every single part has its own statistics and properties, such as battery consumption, speed, power, damage type, etc. and we have to say that it's very fun to experiment with all this stuff and create a unique war machine which fits your playstyle.

Graphics wise don't expect statethe-art visuals, the game is simple and light but cool, and as we already said before, the artistic style is unique and quite enjoyable, very cartoonish and fun.

Guns and Robots is a simple but fun online shooter. It may be too rough and casual for a lot of players, but it's a nice distraction from all the overcomplicated games around and we are sure that a lot of casual players who are looking for a fun game to play during a quick break will like it, specially thanks to its humorous style and the unique robot building system.

If you want to know more about Guns & Robots, click on the "info" button below.