First Impressions on The Skies

First Impressions on The Skies

Developer and publisher Eforb recently started the Alpha early access of their post-apocalyptic MMORPG ‘The Skies’, a classic fast-forward of our own Earth after some catastrophic solar weather that pretty much brought on the end of the world, covered everything in dust and brought on a 150 year darkness. We begin our story as the dust begins to settle and the world that was is pretty much gone, what’s left is an arid desert landscape known as the Wastelands and survivors trying to get by, avoid mutated beasts and fend off roving bandits (or become them).

Setting wise it’s far from anything unique, it’s very much a Mad Max style world where it is dog eat dog and in more than a few ways it felt like the developers have taken their cues from Bethesda’s Fallout series. For an alpha the graphics are half decent with some night and day cycles that show off the shadow effects pretty well, but overall it’s still a long way off something like Fallout and at times can look a little dated (though this is alpha remember). 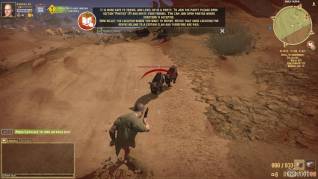 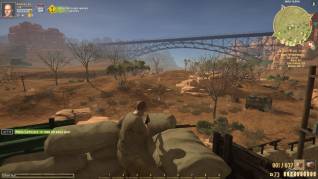 Creating your character, right now, is extremely weak and pretty much every player looks the same. There’s way too much of an emphasis on the different types of tattoos you can have all over your body instead of multiple hairstyles, body shape sliders, and right now you can’t even play as a female character. After settling on your appearance you then get to spend some character points to improve stats, there’s the core 6 stats (Strength, Endurance, Dexterity, Intelligence, Technology and Luck) which give you various boosts and benefits such as being able to hold more weight, be stronger in combat, or have more advanced dialogue. This last one was the most apparent as we started with no extra points pushed into Intelligence and our characters dialogue options were all “Errm…. Yup… Sure…..” and then with some points spent in we suddenly turned into a poet laureate. Within each stat there are three main skills that you can further specialize, stuff like Communication, Medicine, Theft, Heavy Weapons to focus your playstyle a little more.

After the initial tutorial area and leaving our family farm to find our brother we headed to the main city of Kimary, a real run down slum of a settlement that would be our main quest and crafting area as everything outside the immediate area surrounding Kimary was a PVP zone filled with players wanting to kill you.

The quest system is a great feature to the game, with branching quests there are multiple ways to try and complete them, such as trying to get drugs for one of the guards we could try and get some from the doctor (who then asked us to complete a quest for him) or buy some from the bartender, or we could just shop the guy to the local law. We started trying to get the drugs off the doc and had to recover his tools that some kid had stolen, which in turn meant us talking to his mother, which in turn meant us doing a quest for her to stop some guy who wanted to buy up her house, which meant talking to the dude and we ultimately took back his message to her that he won’t buy it if she joins a brothel… she didn’t like that, she wouldn’t help and that route to success in the guards drugs quest was shutdown with a fail, subsequently also losing the chance to get the rewards from the docs quest. From here we thought we’d just tell the Sherriff one of his guards is trying to buy drugs, thinking it would give us some cool quest to maybe bring him in or get in the Sheriffs good books… it didn’t, it just made us fail the quest and lose even more rewards and we ended up with nothing for our 20 minutes of running back and forth across the city. 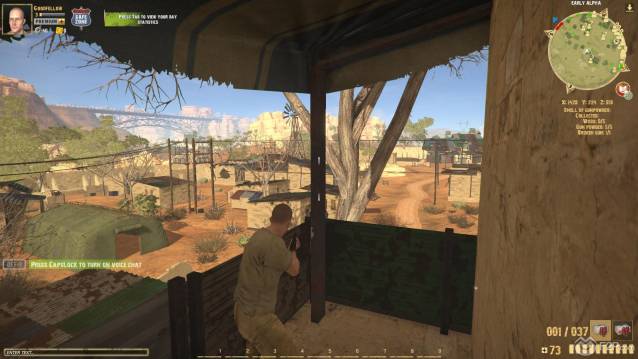 Whilst the questing system is decent in concept, with your skills playing a part of your options (e.g. we’re pretty sure with a higher Theft skill we could have stolen the drugs from the doc’s safe), and the quests you get in the future based on your previous interactions, ongoing storyline and your reputation, in practice it was a little weak. The voice acting was awful in some places, the dialogue messy, and our quests revolved more around running all over the place talking to NPCs than anything particularly fun (though we’re sure there’s some pretty decent quests out there).

One of the quests we picked up from a crafter was for him to make us a new weapon, which meant going getting some parts from one of the nearby bandit camps just outside of town. Heading over the aggro range on these dudes was insane, it felt like they ran across the map to come and get to us (which I guess is a little more realistic as if we could see them then there’s no reason they couldn’t see us). Enter combat. With our shotgun we could pretty much one shot kill these guys, but oh my did the combat feel clunky, it doesn’t seem like there’s any direct hits when you shoot a target, so when they are hit and you’re aiming at their head it is still their chest that shows the bullet impact blood splatter (presumably there’s no individual hitboxes for head, chest, legs, etc.). Similarly you can have your target over the enemy and still somehow miss… it just doesn’t feel accurate at all. 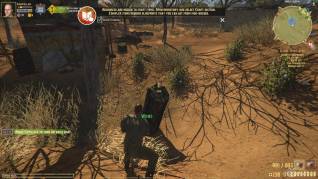 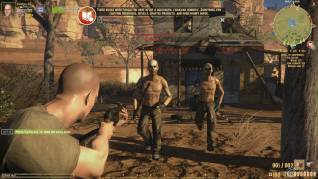 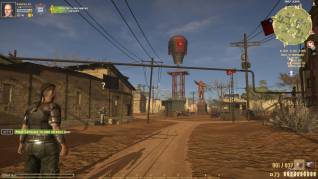 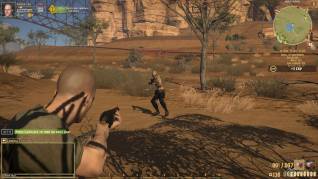 Whilst we didn’t get the chance to check out any PVP (heading into the PVP zone we were always killed by the randomly appearing mobs before we ever laid eyes on a player), and the Arena PVP queues were empty/offline, the town capture system for Clan Wars does at least look fun and we do like the idea of being able to take over a territory and set up a base with your guildies.

Ultimately whilst the game is an alpha and dodgy graphics, mechanics and bugs can be forgiven in part, we doubt that The Skies is definitely not going to be the next big thing sadly and that is fundamentally down to the genre. The sandbox style MMORPG just unfortunately doesn’t seem to be the strongest, and you only need to look at the other near future Mad Max style sandbox MMORPG Fallen Earth to see how much games like this struggle, games that have already been out for a while and don’t have the bugs and alpha issues that The Skies has. Whilst the concepts in place are good, the questing has potential, even for an alpha everything just feels like it’s fallen short of the mark, but with one of the worst combat systems we’ve seen in an MMORPG it’s hard to see how this core feature is going to change so much to make the game more playable.

First Look at The Skies