Top notch graphics, players won’t have to spend money as it is free to play.

We spent a few hours recently playing Winterfrost Legacy, the newest free to play browser RPG from R2 Games. We’ve played a lot of their titles before and I think it’s fair to say that there are a lot of similarities between them. So checking out the game we were hopeful (but not optimistic) that Winterfrost Legacy would be different and maybe bring something new to the table, playing the game a little longer than normal until we hit level 54 prior to the server wipe in preparation for the open beta phase (in all honesty these Alpha/Beta phased seem to be more stress tests and getting rid of the major bugs from all we can tell as the gameplay rarely changes between them and the final launched title).

From the four available classes (a step up from the typical three trinity classes we see in R2’s RPGs) we went with the Shaman, a versatile caster that can be both offensive and defensive depending on what position you play her in. The classes are gender/character locked, as expected, and there’s zero customization so everyone looks exactly the same, again, nothing new from R2s RPGs. Beyond the class choice and aesthetics there’s pretty much zero customization with the class either, as you level up you gain Skill Points to invest into improving your class skills or actually unlocking new ones. However, you have to spend these points in order, at least there are pre-requisites as to when you can open up new skills, so it is an entirely linear system where as with how every class looks the same it also means that every level 40 shaman has exactly the same “build”. 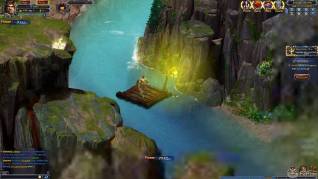 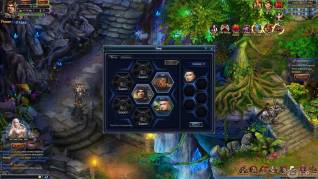 Moving onto the Mercs, the companion characters you hire through the “Tavern” (why this is always a Tavern in every game we’ve no idea, not once do we actually visit a tavern in the game), all bar your first two characters who you acquire through progressing the story-arc. Until you get to the later game, as ever, everyone has pretty much the same Mercs in their party as they are unlocked as you meet the characters in the game once more shoving the linear progression down our throats. All the while everything is relatively automated, clicking a quest journal link in your log automatically runs you to the NPC or location you need to be in, there’s practically nothing to explore in each area and so deviating from this click and auto-path element is pointless.

The automation doesn’t stop there and we come to combat. The Mercs in your party are all completely automated, the only control you have over them is choosing which ones you want in your party (the size of your party grows as you level up), whether you want to spend gold or Merit to level them up, and what position you want them to be in in your group formation (e.g. frontline, centre or backline). This essentially makes up the “strategy” portion of the game. So back to combat, as we said you don’t control the Mercs so they will attack whichever targets their skill and position determines, building up Rage to unleash stronger attacks. Players have the option to control their own character, choosing which skills to us which adds an element of tactics, and becomes more prevalent late into the game. For us, at level 54, letting the game Auto fight still worked out fine and the only battles we ever lost were ones that were stacked against us stat wise, no lack of skill or strategy ever factored into defeat, and simply meant we had to grind some other features before we could progress past this boss. 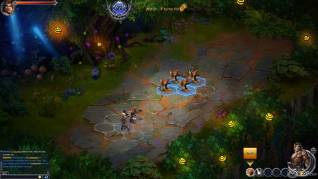 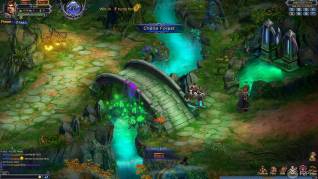 The whole “progression” element is slightly false, the reality is that the content is very much the same thing for a long time; everything is typically battle through three groups of trash mobs before fighting the more powerful boss, there was no real difference between Questing, fighting the Merc Duels, fighting through the Crypt, etc. No difference, no challenge, no thought, no fun.

The story-progression wasn’t much better, the actual story-arc once again was a recycled and rehashed version of all the other RPGs R2 Games has published, typically revolving around the Gods/Guardians/Spirits summoning you to fight against the rising evil that threatens the world and with the Guardians help (who always join your party) you are the person to stop them. An epic saga worthy of an ale by the tavern fire, if it wasn’t constantly interjected with “quests” to play hide and seek with a little girls in a village or “fetch me some wood”. It always seems like the developers have latched onto the idea that MMORPGs have these sort of filler “collect 10 wolf tails” quests and have gone down the same route, but when you only have one real story-arc then there’s no place for this kind of crap. Moreover when practically all of your features, systems and gameplay are the same as every other RPG then the one thing that is supposed to be drastically different is the storyline, not just wrapping everything up in new graphics. 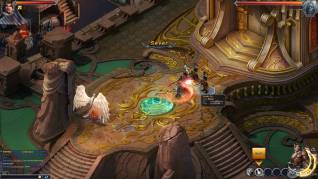 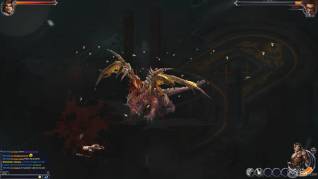 One of the things we will commend, as we always do with these games, is that the graphics are stellar, at least the backgrounds and environments and it’s clear that here is where the majority of the time and effort has gone into (which is a shame as you’re in most of these areas for about 5 minutes and have no reason to ever return. The same can’t always be said for the pixelated character/monster models, whose missing frames lead to some really jerky animation that look like a blast from the past as opposed to a modern RPG. Combined with the rather terrible performance it as often as not meant that parts of the scenery were always blurred whilst they loaded up; if we can play FPS and MOBA with no issues then we should sure as hell be able to play a browser RPG without latency problems.

At the games there is a tried bag of “features”, most of which are just flashing bells and whistles giving players free stuff for logging in and making a false sense of achievement, combined with a tired story-line that has been done to death and boring automated combat, whether the PVE Dungeons or the Arena PVP… it’s all the same. Yet players like the games, they keep playing them, this much was obvious to us from the inquisitive nature and praise the game was getting in chat; the games cater to a certain type of player, and we’re not one of them. So whilst every game that is released and continues to be a reskinned version of the last, then forgive us if our review seems a little bit salty. If you’re played one of R2 Games’ other RPGs then you know exactly what to expect with Winterfrost Legacy, we’ll let you decide if that’s a good thing or not.