Clash of Avatars is the new browser-based RPG game by AMZGame. It went recently into open Alpha, so we took out some hours to check it out. We’re not the biggest fans of Asian RPGs, it’s no secret, they’re typically copy-paste clones of each other, many coming from the same developers and being reskinned versions of older games using the same features and mechanics. However, we had hopes that Clash of Avatars (also known as CoA) would be different. As soon as we loaded up the game and the 3D graphics showed up we had high ups... but these were very quickly dashed as our character jumped straight into automated mode and started running around fighting everything without any player input. All we could do was sit back, fold our arms and say “Here we go again…”

The game is the same as practically every other Asian developed RPG out there; the reason I can say this is if I sat and broke down the key features of the game and explained their core mechanics, even at times using the name of the feature, then it could literally be one of a dozen different RPGs. It’s quite frustrating.

The bad English translations hit you with the first opening sentence, a great start. Then the automated gameplay, hacking and slashing through enemies that can barely touch you whilst you look at the screen with your arms folded, occasionally your participation is required when you finish killing creatures and they run to the NPC and you have click the “Next” button. It’s not a game if you don’t get to do anything. “But you don’t have to use the auto-combat, you can fight manually” people may cry, but what honestly is the point? The combat is shallow, shallow enough so that the AFK mechanics can work, so if you turn manual combat on then you just have four skills that you can use on relatively long cooldowns, there’s little need for moving around or trying to be tactical, it’s just trading hits until your (or more likely the weak underpowered enemies) die. 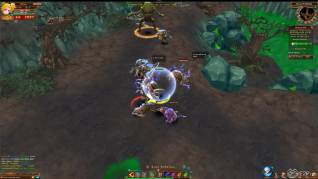 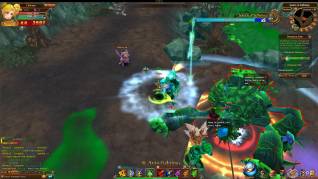 Quests and the overall story-arc are linear, you complete quests in order, you progress the story in the same order as everyone else, reach the same level milestones, unlock the same features; every playthrough of the game would be exactly the same even if you chose one of the other two uninspiring classes. Fortunately this isn’t the core concept or principle of the game, no, that would be to increase your B.R. (not actually sure if it’s Battle Rating or Battle Ranking, it doesn’t even get explained anymore between games as they just presume you know what B.R. is from the previous games you played).

B.R. is the accumulated hero value of all their skill levels, stats, gear quality and everything combined to give them a score; the main focus of the game is to raise this value and become stronger, this is done by spending gold to “Promote” your gear and make it stronger, or spend spirit to “Enhance” your gear… and make it stronger, or spend gold on your skills… pets… mounts… whatever, to make you stronger; there’s around a dozen features that revolve around spending currency or gathered items to simply increase your B.R. in one way or another. It’s boring, it’s been done in so many other games. 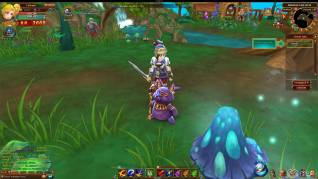 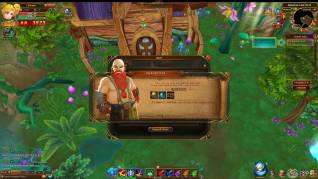 Collecting Avatar cards is one of the key things to do with the game, collect enough of them and you can unlock a new character/Avatar, effectively changing into that character and getting new abilities; the low end Avatar cards are easy enough to come by, but you are going to be grinding hard or buying the high end ones, given the name of the game you would have expected there to be more depth to this system... there really isn’t… that’s pretty much it, new look, new abilities and extra boosts if you are in a formation with a specific other Avatar.

Later game content for us was the PVP, PVE was all pretty much the same, either you smashed through everything or you got smashed, but PVP was a little different. The Arena lets you challenge other players to try and take their rank, you don’t fight the player but an AI controlled version of their character; battles last about 10 seconds max and then you’re done. Capture the Flag was a server event triggered at set times, when you want to play you click the icon to join, are thrown into an instance where the game is already underway and pretty much get one shotted by all the high levels in the same game… then you respawn in the same location and get one shotted again… and again… and again… you can exit the game, but not whilst you are dead and your death timer is on, so it becomes a “try and click the exit button before you get killed again” mini-game. 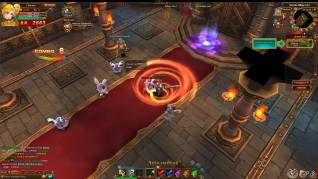 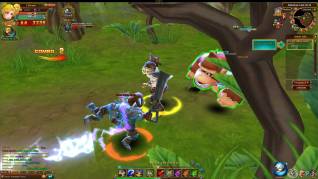 So what’s good about the game? Well, the 3D graphics are a lot better than what we were expecting, upon first sight we thought we might be in for something different, but we weren’t. If you like these types of MMO and you’ve not played all the others, then playing Clash of Avatars first might be fun (again.. if you like these kind of games), but otherwise it’s just the same as every other free to play Asian RPG. Whilst we generally like to review every game on its own merits, how it stands alone away from other games, but as the game has just been released and is in Alpha, but is still using a formula and core mechanics of games that are five years old and deviating very little from those original games, we have to lump it in with the rest of them.

In conclusion the game brings absolutely nothing new to the table, it is a grind fest and a long slog towards end game where you can battle with other players over slightly more meaningful content and events, but the journey to that point is tedious and painful. Skip the grind, just put the fun content at the beginning, and we might be onto a better idea as opposed to making a game that players will spend money on just to skip the boring parts (ie. level 1 – 59).

First Look at Clash of Avatars