Extremely fun. Totally recommended for people that like chat rooms

Do people still use chat-rooms?

Anyone who was involved in online gaming from around 1996 to 2001 may will remember Mplayer.com, a PC gaming community is that acted as both an open chat room-based service that also allow players to create and host a variety of popular games during that time. At its peak the service had 20 million visitors until it was bought by GameSpy. 1998 was around about when I personally began my foray into the Internet with Ultima Online and a little later Aliens versus Predator, which worked over the Mplayer client and allowed me to meet other players through the service, form clans, create chat rooms and create an online identity. A lot of the time I would actually just hit up the chat rooms, not gaming at all, but maybe entering “20s Chat” to hang with some of the cooler, older American kids that I’d only seen in the movies (I’m British), or flip between annoying and being intrigued by the older folks in “40s Chat” and hearing their outlooks on life. It was a basic system when it came to features, though did have voip, but it was a fun time for me growing up to hit up the chat rooms and see the same familiar faces.

So my surprise at trying out Club Cooee was a marvel just to see how far chat rooms have come, that is essentially what the title is, unlike our other reviews and profiles on the site Club Cooee isn’t a game at all and is simply an interactive 3-D chat room. That said, one of its core features allows players to create and furnish their own rooms, some not that different from games such as The Sims, the we’ll get to that later. 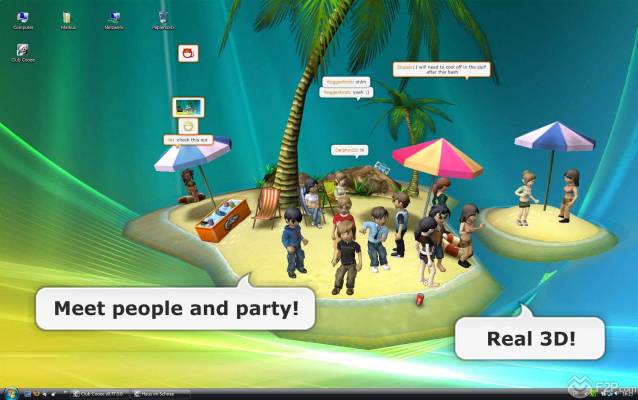 Step into the game I didn’t really know what I was looking at, opening up straight into the character creation screen the game gives you a wide enough variety of facial features and hairstyles to begin customising your avatar (it has both that look and feel of a Wii Mii). You can make them as close like this to yourself as you want, or in such a world of online anonymity should be very want to be, for us we went with an insane grinning constantly wide-eyed fella that in last was a thing of nightmares extremely funny funny for us. We had a small choice of clothing to choose from, but with instant access to the shop from our menu bar (as opposed to a physical location we had to visit in game) we had a huge array of items we could purchase from hoodies, gloves, boots, jackets, vests, hats, crowns, wings, roses…. the list was pretty extensive. The majority of the items were accessible to us, as with them provided with both the standard in game currency and some premium currency as well, though as we were restricted with not having VIP status one of the best items can be purchased. 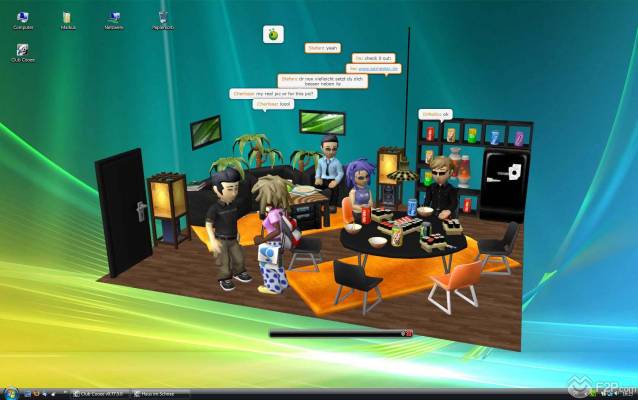 Club Cooee is a Free 3D Chat community. Meet and Chat with new friends. Dress up your 3D avatar. Create and decorate your 3D Chat rooms here in F2P.com

After personalising our avatar we decided to look for a room, currently there are three types of rooms; standard rooms (typically made by players), Quiz Rooms and DJ Rooms, albeit players can put a DJ station in their own created rooms. We actually found it pretty difficult to find other rooms initially, whilst there is a list of all the available rooms the layout has advertising is at the top and then a huge gap before the listed rooms and as we didn’t notice the scrollbar it took a while before we could even check it out (we actually presume that nobody was online…). Once we’d worked out whether rooms were it was nice to see how organise they were, were each room name you could see how many users were inside, if there was a dress code (i.e. you can strip down to your underwear) as well as the primary language for the room, those often as not you have a mixed bag of languages wherever you go, at least in the United Kingdom rooms. 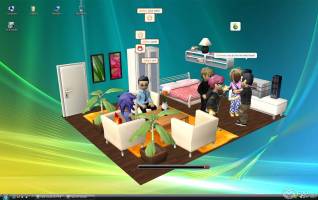 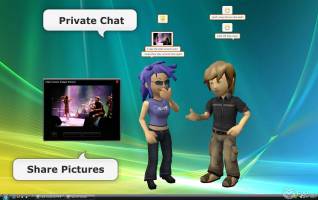 Visiting one of the DJ Rooms was an eye-opener, in the room there is one or more DJ booths that players can interact with and upload songs from their own computer and actually play music to the rest of the room (people obviously have the option to mute the room if they wish) or alternatively search for videos on YouTube which it will play over the speakers and put the video on a huge screen for all to see. You are at the whim of the DJ and so we can promise the best song choices look there is at least something from a. All along the edge of the wall-less room, which floats in a big colourful void of nothing, users lined the edges and were using their purchased Action emotes to perform some fancy dance moves and showing off their newest gear. With our acquired currency we decided that it was a good idea to make a statement, dressing in full evening wear including a top part we then proceeded to do sit-ups different of the lady guests (this is how we typically try to flirt with ladies when we are in a club). The chat in the room is pretty standard, lots of pleasantries and spending 5 minutes welcoming familiar faces when they enter a room, banal conversations or joining in the middle of discussions. We did get to witness a 13-year-old girl having a debate with the moderators because she’d wrote something along the lines of “don’t be a hater b***h” or some rebellious statement and they wanted her to remove it. They were very tolerant and the debate went on for about 5 minutes (I would have banned her after the first back chat but I’m a power hungry tyrant).

Heading from room to room the DJ booths are in the majority of areas now, a pretty cool addition, one of our favourite rooms was a… well… it was very much a lap dance bar, with poles and cages, minus the nude dancers... initially. Unfortunately what I had realised is that whilst testing the Dress Code in the other rooms I was by default not wearing any calls when I entered and so was greeted with calls of “The stripper has arrived!”, which prompted me to head straight to a cage and start dancing to what the DJ was playing, surreally it seemed to be an ongoing playlist of Disney songs. I was in the wrong room.

Checking out the Quiz rooms called for the return of my evening wear and top hat to prove myself as both the other users fashion and intellectual superior. Players can jump on a number of podiums and answer random general knowledge questions that pop up, in doing so players earn XP and in game currency. As a non-VIP we were kicked off our podium after getting a few questions right, can a pointless as we can change to the next podium or even change rooms if we need to, but hey ho. Not much else to say for these rooms, there’s a huge number of seats for audience members to come and sit down, so unless players or the community are running a quiz competition the rooms are pretty silent while people focus on answering questions. 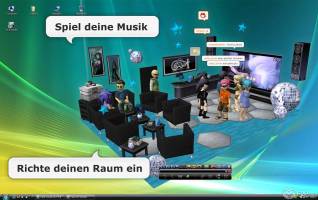 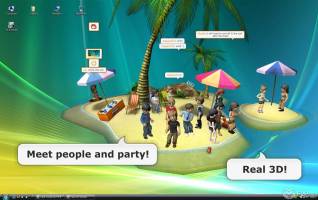 To round off our experience we decided to check out the options for creating our own room, these can be made private or public, which means you generally get a lot of people randomly walking into your room. You can gain various free items just by playing and levelling up which you can place in your default starter room, they can be decorated with a full complement of furniture, decorations and accessories and players can even place down doors which when you edit the details can be linked to other rooms and locations. The tools for moving around furniture are pretty great, giving a full movement and 360 rotation on all three axis and players can also choose the vertical height of where the item will sit. For all is we littered the room with creepy rusty metal doors, dressed in our finery, we waited for someone to enter and then walked over with our wide eyed face (seriously office was creepy as hell) and stood about an inch away from them saying nothing until they left. Brilliant.

Definitely an interesting experience, definitely recommended for people that like chat rooms will love a few extra features to create their own identity and locations/rooms. If this anything had been round back when I was still using Mplayer.com it would have without a doubt been our go to location for fun, chat and shenanigans and even a little matchmaking if that is what you are looking for!