City-building browser games aren’t exactly something new, the market being filled with these kinds of games, but things being to sound more interesting when it is a big name like Ubisoft to offer its own interpretation of the genre by bringing online, in your browser, one of the best and most appriciated off-line city building games series: Anno. The game is Anno Online.

In the single player games the user is tasked to build and expand their very own thriving empire, starting from a single undeveloped colony and making it grow and flourish through trading, diplomacy and war, discovering new lands and technologies in the process. Anno Online tries to bring online the spirit of these games, adapting it to the more casual style of the browser games crowd. The main big difference with the offline games is that combat and disasters, two important elements of the classic series, totally disappeared. In-line with this new, more casual style, players will be a lot safer than before in Anno Online, having to worry only to make the best use of their resources and to keep an eye on their finances and citizens needs. This doesn’t mean that the game is a piece of cake, though, as strategic placement of roads and buildings is crucial if you want to build the perfect city and avoid resources waste; but more on this later, for now, let’s start from the beginning.

As usual, the registration process is quick and easy. You can use your Facebook/Uplay/G+ account and enter the game with a single click. The standard tutorial will be there to welcome you, with a series of quests that will lead you through the game’s main systems and features and give you rewards upon completion. Quests are never intrusive and are actually very useful; also, you won’t have the feeling of being a simple button-clicking automaton like in many similar games, as even from the tutorial you will have to think where to build your buildings and your roads in order to make the best use of the space at your disposal. A good and interesting tutorial which is not just a boring click-fest is something extremely important, as it’s the first thing that a player meets in your game and probably the element that makes him stay or go, and we think that here Ubisoft definitely nailed it. 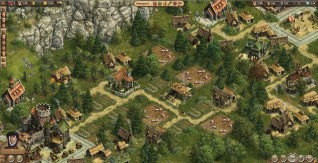 Graphics are surprisingly good for a browser-based title, with nice and detailed 2D images and simple sprites and, as time passes, your city will keep looking more and more alive and real. The engine is quick and light and the navigation system is intuitive and comfortable. The UI does its job and you will have an idea of what a building does just by hovering the mouse on its icon in the construction menu or clicking on it once it is placed. Sounds are average at best, and even if the background tunes aren’t bad, hearing them over and over could get annoying quickly; however, you can choose to disable them and solve the problem.

Gameplay wise, the game is similar to many other games on the market: place resource buildings, gather resources, build more houses to increase your population, build other useful buildings such as the well and the market, expand and repeat. The way in which Anno Online is different is that your city’s layout actually matters; buildings affect each other, increasing or decreasing productivity and population in their area of effect. Moreover, often the presence of a certain building in the nearby vacinity is needed to place another building. Amuch appreciated feature is that you can freely move your buildings around even after you place them, in order to experiment new layouts or just change the appearance of your city. Roads are also important, as the majority of buildings need to be connected with each other so your citizens are able to move around the city and carry resources and goods, and you will have to place by yourself every single turn or straight path. This high level of customization, besides a purely tactic point of view, will also make all those players who love to build their dream city - and care about aesthetics as well - happy. 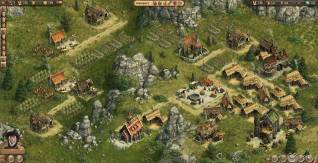 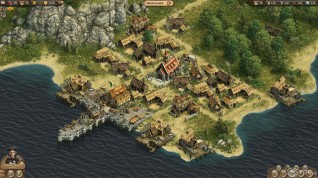 As your city grows new types of citizens, such the vassals, arrive, and you will have the chance to explore more areas of the map and expand your territory, eventually reaching new islands.

Anno Online has a premium currency purchasable with real money, rubies, which will help you to have an easier time and give you access to resources, building and more; however, for what we were able to see, the game is absolutely enjoyable without spending a penny.

Anno Online is a very relaxing and casual city-building experience, probably too much for someone. Maybe the removal of some classic elements from the series such as combat and disasters lowered the difficulty a little too much and could drive away some of the hardcore fan of the saga, but it will surely be seen as a strength from the more casual crowd, which the game seems to be aimed to. If you are looking for a challenging and competitive real time strategy game you should probably look somewhere else, but if you want to enjoy a nice and simple yet still polished and rewarding city building game, where the strategy lies in resources and income/outcome managing and city map planning, Anno Online could be a pleasant surprise.