This is a big moment for Piranha Games, as their popular free-to-play MMOFPS MechWarrior Online just hit the milestone of 1.1 million registered pilots during the game's open beta. Infinite Game Publishing has also unveiled the release date for the long awaited  1.0 version of the game: September 17th, 2013.

Since the launch of Open Beta, players have spent more than 9.6 million hours or 1100 years playing MechWarrior Online, resulting in the annihilation of more than 46,941,487 Mechs. These loyal fans have lovingly destroyed 3 billion tons of metal on the battlefield, which is 8,359 Empire State Buildings, resulting in devastating carnage across the Inner Sphere, MechWarrior-style. Stacked end to end, these destroyed Mechs would reach to the moon and back 1,221 times. The total cost of this damage is a staggering 18,316,519,465 C-bills.

To celebrate the event, Piranha Games has released an amazing infographic which shows us all these numbers. 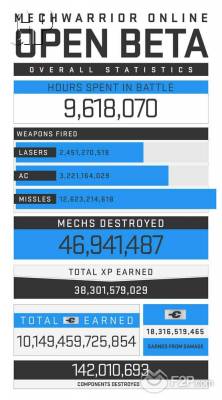