We were kindly invited to London to sit in on a session with some of the guys from Gazillion Entertainment to have a playtest of the upcoming Marvel Heroes, the last time I got to meet these guys was last year at GamesCom in Germany, but this was far more than the brief insight we got there. We were taken up to a private conference room at the hotel the guys were staying in where they had decked out the room with laptops for us to playtest and we were introduced around the room to the Gazillion guys; Stephen Reid (Community Director), Leo Olebe (VP Marketing) and of course David Brevik (Pres./COO).

David opened up with a presentation, most of which admittedly was stuff that anyone who has been following the game will already know about, briefly highlighting features, etc. After about ten minutes we were finally asked "So who wants to play?" Personally I was really looking forward to the chance as I only filmed gameplay at GamesCom and didn't get to play myself. Leo asked around to see who had already played or who had played an MMOARPG (Massively Multiplayer Online Action Role Playing Game), I let them know I played the original Diablo when it came out, but that was it. He suggested maybe doing the tutorial, which was essentially the introduction to the story that also walked you through the controls, as we'd be jumping straight into level 16 content.  I'd already seen it; I wanted to play!

We’d logged into Avengers Tower, which is one of the main bases for the heroes and here we were free to switch between the different characters; currently you can only switch characters at the bases but I was later informed they intend for players to be able to switch characters in the PvE quest areas so long as you are not in combat. Whilst the flexibility is nice I do think this means that some areas will possibly have that “go to” character or party build that everyone switches to, but the characters are so varied and customizable to your own style of play this might not be as big an issue as it seems on paper.

I had a quick chat with Leo and he walked me through each of the 18 currently playable characters in this build and gave me a description of each until "... and we have Thor, who is totally overpowered in this build, allegedly, so you may wanna play Thor and throw some serious smackdown...". Thor it is. A quick check of our inventory and we already had some available cosmetic costumes to change the look of the char, so with Mjölnir in hand and dressed as “classic Thor” we headed over to our first zone with our first quest.

In our party were Steve as Black Widow and two other press guys as Iron Man and X-Men's Cyclops; sat behind me Leo was playing a much welcomed backseat gamer walking me through the controls and telling me where to head. Even with my inexperience the controls were ridiculously easy to pick up and I had about six skills keyed to my hotkeys, with that I was charging into battle and laying down some Nordic smack-down. For those not used to ARPGs it's pretty much facing the right direction and mashing buttons, instantly aiming my attacks wherever my mouse cursor was, it took a little getting used to but after a while felt really intuitive. Your attacks use your spirit pool, which slowly depletes, but you still have your basic attack that you can always do, and your spirit will naturally rejuvenate over time when you are not attacking.

We were given our first adventure location, Hell’s Kitchen, to go take out your usual nefarious bad guys. A nice precursor to the location was a narrated motion comic of various bad guys that would appear in the zone and a fight scene between Daredevil and a few lesser villains; though Daredevil wasn’t in our group and this is something that was touched upon later in the gameplay. As much as the developers would like each motion comic to load up with images of your current party the technicalities behind this, the fact that each comic is hand drawn and the massive combination of potential Marvel Heroes that would each need to be drawn means that it will always be a more generic random selection of heroes. Still, it was entertaining nonetheless.

In Hell’s Kitchen we made our way through the streets, I’d actually fallen behind so had to catch up my group who were smashing the Green Goblin, a tough fight that definitely needs a group to take him out, but here we got the chance to start trying out our powers for the first time. Combat is literally a mass of light effects and explosions across the screen, which really draws you into the combat and immerses you in the game itself, at first it can admittedly be a little overwhelming and confusing but as ever you become accustomed to it really quickly. One of the things to remember is that in part Gazillion have done away with the traditional need for the Healer, Tank, DPS “Trinity” that you see in MMOs and there are no healer classes, everyone looks after their own health bar with the health orbs dropped by mobs which give slight heals, as well as using health packs to quickly heal a lot of your energy at once.

Continuing through the zone we got to destroy mob after mob, explaining the different drops that land in the actual game (as opposed to being on corpses), such things as spirit and health drops as well as customized gear for your character; any loot you see is for YOUR character and each player will see something completely different. We also got to try out the interactive environment by smashing boxes, barrels and even picking up cars to throw them onto the waves of trash mobs; pretty epic.

We fought our way through the street and came across (read: were led to by Steve who was being our in-game tour guide) an instanced MGH [Mutant Growth Hormone] Factory where they try to artificially create mutants. Lots of barrels to blow up as we blasted, electrocuted and power slammed mob after mob until we came to the end game boss: Tombstone. Even before we fought him the guys said “he needs some buffing”, which I couldn’t agree with more, he dies pretty quickly and is a pretty underwhelming as a boss as he just seems to stand there and try to hit heavy, kind of a boring fight given that this was at level 16 as he didn’t seem to be anything more than a slightly tougher mob. A portal opens that leads you to the beginning of the instance so you don’t need to run all the way back through it, and here we could exit the instance back into the main area so fight more mobs and complete our objective locating a subway. 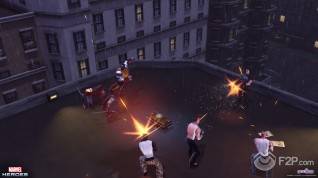 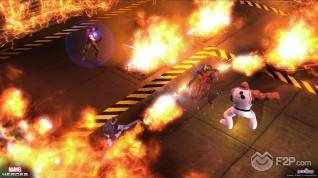 At the entrance inside the subway zone there was a teleporter where we were able to teleport back to Avengers Tower to take a trip to the vendors before carrying on deeper into the zone, teleporters and NPCs can be found throughout the game to insta-travel you to different locations making getting around the game pretty effortless. We returned to Avengers Tower, stocking up on vital supplies before continuing with our journey…

Keep following us for the second part of this exclusive press coverage!