At Gamescom we checked out one of the newest third person MOBA Shooters on the market; Gigantic, the 5 v 5 team battle where players have to fight alongside a huge AI controlled boss whilst simultaneously fighting another team who also have a boss. The game has been floating around for a little while now but this is the first chance we got to sit down and play the game then sit down and speak with James Phinney, the VP of Product Development for developers Motiga. The setup was a slightly larger affair than normal, with lots of the team crammed into the booth we had a quick presentation about the game letting us know what it was about and what we could expect, then played 5v5 with 2 press guys on each team.

Looking over the list of available characters we settled with the quirky and cuddly looking Uncle Sven, a mad alchemist that bounces around the battlefield hurling potions, a combination of support role and ranged damage. Running around the map and keeping an eye on the mini-map to see where our team were at was definitely the key, anyone playing MOBA will be more than familiar with good Map etiquette and so we didn’t find ourselves caught out too many times. Rushing to the various control points we were able to spawn creatures that gave our team buffs for as long as they were in play and then worked towards building up points to make the enemy team boss vulnerable so that we could attack it and get a Wound on it and advanced them into the map, three wounds and we’d draw the two bosses into the middle of the map for the final showdown.

In all honesty it was quite difficult to work out what exactly was happening, in the fast paced combat (and it is extremely fast) and us bouncing off into the air with our rubber potion, it was a challenge sometimes to manage fighting, reading skill upgrades to optimize the character, keep an eye on the map and try to listen to the Devs and ask questions. The whole thing was kind of a blur and it’s only afterwards that one of the guys that was guiding us said it probably takes 2 or 3 games before you fully understand what everything does.

Aside from that we held our own, managed to get quite a few assists, a couple of kills, and didn’t do too badly in regards to avoiding taking a dirt nap, which we’re particularly happy about given that we were playing with Devs and can’t imagine they were going too easy. The constant push towards their enemy boss had us taking a definitive lead, but once the showdown happened it was quite difficult to get the final kill; the more wounds remaining your boss has the more difficult it is to take down, but you still have to fight to make it vulnerable, which the other team managed to do to us. It was good to see that even though we had led the game up to this point it’s still possible to throw the game and the opponent make a comeback. 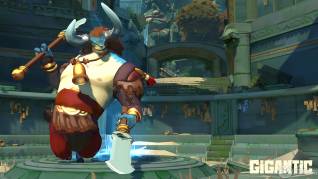 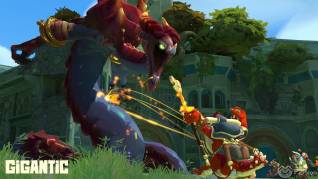 There are currently three maps that are pretty well developed and of those there are two that are in the Alpha, though the third has been played by some competitive teams from other games but more internally who have been giving their feedback on high end balance. That said according to Phinney “over the development of the game prototyped a little more than a dozen different maps, most of which are trash and aren’t ever going to see the light of day, but a number of which are in the queue for when we get to the next one”, when the Closed Beta goes live (20th August, signups are now available through their official website) they plan to lead with a single map then slowly roll the other two out. The game doesn’t ever plan on having any different game modes, focusing more on ways to change the gameplay through the different map types, with the use of firing arcs, cover, verticality and more the environments play a huge role in the game already.

When you level up you have branching upgrades to improve one of your various abilities (QER as your primarys with other buttons coming into play if you unlock extra skills), each skill point spent gives you an option between two different talents for that particular skill and so players can continue to customize their character freely. According to Phinney this wasn’t always the case and it’s one of the features in the game that the community heavily influenced, the original system not being particularly satisfactory, to the point where it is considerably more immersive and lets players completely diversify their characters by upgrading skills in different ways or outright changing how they work completely. 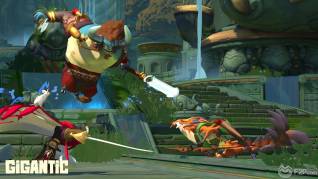 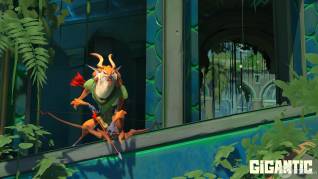 Monetization will primarily focus around selling customization items such as skins, some of which are going to be showcased very soon, though little information on whether they will be go down the Hero Rotation route, they’re adamant about avoiding any pay to win element.

Overall the game actually looks and plays a lot better than we imagined from the videos we’ve seen, once you’re in front of the screen and in control it’s an extremely vibrant and graphically stunning game to play. The controls are familiar enough to anyone who has played MOBA or Shooter games, with a few twists on different features and a host of characters to choose from; we think there will be big things for Gigantic.