For our final day at Gamescom we met up with the guys at Albion Online, the free to play open sandbox fantasy MMORPG that makes us think of an updated version of older more retro style MMORPGs in terms of features that balk at the overdone theme-park style titles we frequently see. In such an overcrowded fantasy MMORPG market we have to say that in many ways Albion Online is a breath of fresh air, taking us back to our old Ultima Online days where life was brutal, challenging and a hell of a lot more rewarding. Sitting down with two of the developers they gave us a brief overview of where the game was at, having only played it in very early Alpha, as we watched the game on the PC screen with one of the two characters running around we could see the instant cross-platform compatibility on the tablet in front of us seamlessly tracking the second character.

Our guides launched into the general core functions of the game and the notion that everything is built around the player driven economy: players gather resources, they craft items, they trade them to other players; it’s a fairly simple process but with a very uncommon level of detail that we were given an insight to.

First and foremost the resource gathering, practically everything can yield some sort of resources, whether mining rocks, chopping trees, harvesting bushes, these are things you find in the world as your base resources, but from there you can actively try to create other resources by farming, or breeding horses and livestock. Some resources are fairly easy to acquire, some are extremely difficult and require heading into more dangerous locations, but more on that later.

Second is crafting; pretty much everything in the game is crafted by players, from weapons, armor, items, consumables and even houses; the real estate plays a huge function in the game providing players not only with a fundamental personal goal but also a community driven one as players band together to create player cities. Player cities themselves offer more options for crafting, as opposed to the standard workstations found in the early areas, so as ever there is a reason to try and aspire to that next big thing and get rewarded for it. The best gear in the game will always be craftable, again the mantra is that this is a player driven economy, but will require the most difficult to attain resources, so the crafters, resource gathers and traders have this symbiotic relationship where they all need each other. Furthermore there is durability on everything in the game, all items are finite and are generally an item sink, from weapons, tools and in a way even real estate as your personal buildings or player cities can be attacked, raided, captured and destroyed. 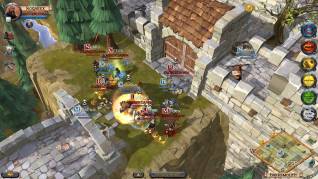 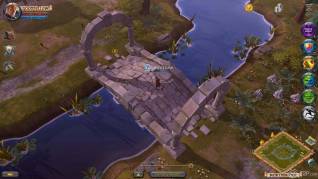 Crafting is particularly important when it comes to gear as when you craft an item you get to choose which abilities it has applied to it, which will then determine what skills a player has available to them when it is equipped; essentially there are no classes in the game and your abilities are determined by what you wear. Crafted or looted items can also be reforged at a cost, but there are no drops from mobs of items, only the resources required to craft them such as runes and gems. The types of items and weapons you can use are determined by the Destiny Board, a large web of talents that players must unlock to equip new items (if you don’t have a talent for a Two Handed Axe then you simply can’t equip it), however the Destiny Board also has branches for crafting and farming as well.

The trade component is an interesting one as players have the ability to head to the market and either fulfil trade requests of players looking for a certain item, or create their own sell orders to put up for sale their own items. Markets, as with banks, are localized and so if you put your items in one place then you don’t have access to them in the next area, this all plays a part of the bigger picture that they don’t want players to get too comfortable, for the game to be too easy, to constantly provide a challenge (albeit this type of game is definitely not going to be for everyone.. but what do they know, right?). 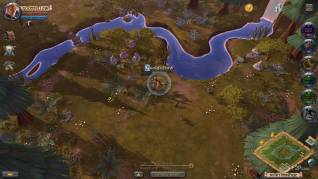 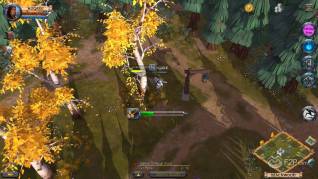 So what is the main objective to the game? Well as a sandbox the truth is that there probably isn’t one, or more that it is endless, but PVP is going to play a major part in the game but absolutely doesn’t require players to be combat focused characters. The world itself is divided into two main playgrounds, outside the wall and inside the wall. Outside the wall is the newplayer regions for the most part, though they are littered with camps of AI mobs, mini dungeons, plenty of resources, they are at least a safe haven when it comes to other players. Players also have the ability to access the islands to go to their own instanced based home, the initial island layout is identical for everyone, but what you do with your own instance is up to you and how you spend plot of land is your choice; as with all plots of land you have so much of an area to build on and can either go for something big and grand or throw up a couple of useful buildings; it’s your choice. Players can build their own farm, as mentioned, to grow food which is used by all buildings, so even as a solo player you can still make a living selling your food to big guilds that need to keep their territories and cities running.

Inside the wall is a different, here is it open PVP with full looting; you die and whatever you had on you at the time is now the property of your killer. In many MMORPGs PVP and full looting really just doesn’t work, it becomes more a chore and an annoyance and a wall to enjoying the game; in Albion Online this constant threat is there to actually create content. As mentioned some of the rarest resources are found in the most dangerous places, typically inside the wall, so even trying to resource gather can be very dangerous. Second of all there needs to be trade from inside the wall to the outside and vice versa, which means traveling through the zone is dangerous when you have player bandits looking to make a quick kill and some free loot. If you need to transport a lot of items then you can make lots of journeys, because there is a weight limit for players before they become over encumbered, or they can hire oxen as beasts of burden to carry more items, but these creatures move a lot slower and so hiring other players as escorts to fight for you (particularly if you have focused on being a crafter type character) again adds realism, content and a challenge to the game. It’s all optional though, you can live an easy live and never step into the walled area, but you’re going to be missing out on a lot and those willing to make the journey for Guilds and Cities can find themselves making a nice tidy profit. 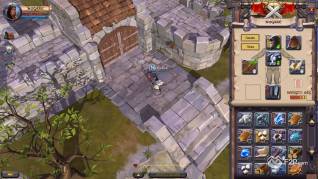 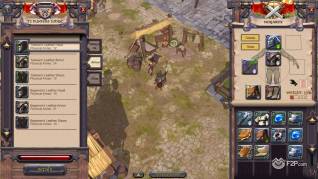 The Guilds vs Guild territory control is going to play a huge part in the game, contesting and controlling territories being the primary end game content. Within the walled area are various territories that Guilds can lay claim to, by claiming a territory players must choose four times throughout a day where their city is vulnerable for a period of one hour, during this time other Guilds can attack your territory and try to level it or take control of it. Outside of these times a mage appears in your city and casts a magic forcefield preventing anyone but the guild from entering, so offering a sanctuary in the walled area, and as crafting is considerably more efficient in these areas it pays to control them. For an attack during the vulnerable times a guild has to have at least 5 players within the area who are then teleported for an instanced based battle, if they win the fight then the territory loses one of its Defend Points (which replenish over time) meaning players can’t simply take a territory as soon as it appears and must whittle it down over time with multiple attacks.

Whilst the focus is on PVP there are of course PVE elements, including random spawns across the world, but the main challenges can be found in dungeons with deadly boss monsters that have some pretty interesting and challenging mechanics. The thing we liked the most about these dungeons is that they are designed for 15 people, but you can have 20 people in a party, if more than 15 people show up then the Boss will automatically rebalance itself to make it tougher for the increased party size. As if that wasn’t challenging enough the PVE Dungeons are also open PVP areas, so whilst you’re in the middle of trying to kill a powerful boss you might suddenly find yourself having to contend with a rival Guild looking to take the kill for themselves; so it always pays to keep a scout on the door keeping watch.

The monetization aspect is following a free to play model with an optional Premium Account that can either be purchased with cash or earned through in game tradeable currency, very similar to the EVE Plex system, one of the greatest examples of a player driven economy of any MMO out there; Premium Accounts will grant more XP, silver and quicker progress through the Destiny Board. Right now the game is still Early Access but they are planning to go into Closed Beta at the end of the year and we thoroughly recommend you try and sign up to get access.