EVE Online: The Good & The Bad

EVE Online: The Good & The Bad

EVE Online is a deep space based MMORPG developed by CCP where centuries into the future after abandoning their homeworld mankind has rebuilt and the major factions battle for supremacy of New Eden. EVE Online has some of the most devoted followers and the biggest critics, check out some of the reasons why in our Good & Bad article...

Free to Play Accounts - Players can now play the game as an Alpha Clone which gives them full access to the game with some heavier restrictions on their skill and ship availability, but still have full access to the content found in the New Eden universe

Multiple Roles - Whether focusing completely on being a mining ship or cargo trader looking to earn money, or a life as a pirate preying on these honest citizens to make your living through nefarious means, the game provides a deep playstyle for everyone

Plex System - To upgrade to Omega (Member) Clone status players can purchase PLEX to activate this status for a period of time. However, PLEX is an item that is a digital tradeable commodity in game sold for ISK currency on the player market, allowing players to buy PLEX and sell it for ISK, or earn ISK and buy PLEX (membership) through playing

Player Economy - The game's economy is extremely in-depth and is affected continuously by the players themselves, the inflation of currency, the fluctuation of prices for various resources, that savvy traders will constantly monitor to make the best return

Corporation Shareholders - The Corporations (clans) in game are run like an actual business, with players able to buy, sell and trade shares of their own Corporation which determines how many votes a single player has in regards to Corporation actions such as trades, alliances and even wars

Heavy F2P Ship Limitations - Alpha Clones are limited to a handful of ships, which is significantly reduced due to also not being able to use cross-faction ships/tech as a limitation making their ship pool extremely low

"Griefing" Tolerance - As far as CCP are concerned any actions in the game that aren't verbal harassment are typically seen as being okay; scamming players out of goods (even those purchased with real money), "Ganking" and holding areas filled with non-combat or low-level players hostage and demanding ISK to leave them alone, or camping jump gates to gank unsuspecting travellers as soon as they load into an area. All of this is pretty prolific, which can be a major turn off for PVE players and a bad starting experience for newbies

Slow Progression - Progression with things like skills is at a fixed rate, and slower for F2P players, so it takes a while to get ahead. Combined with the time it takes to travel around trying to complete quests, failures due to increased PVE difficulty and the stream of player killers, it can take weeks and months to get anywhere close to being able to successfully PVP

Solo Play is Lacking - Aside from simply not having someone to help you play the game with a semblance of safety from ganks, it's very hard to get much done on your own. The experience can be quite boring and, until a player is more familiar with the game they are unlikely to seek out Corporations and so can be quite easily turned off by the game early on simply because of how lonely the experience can feel 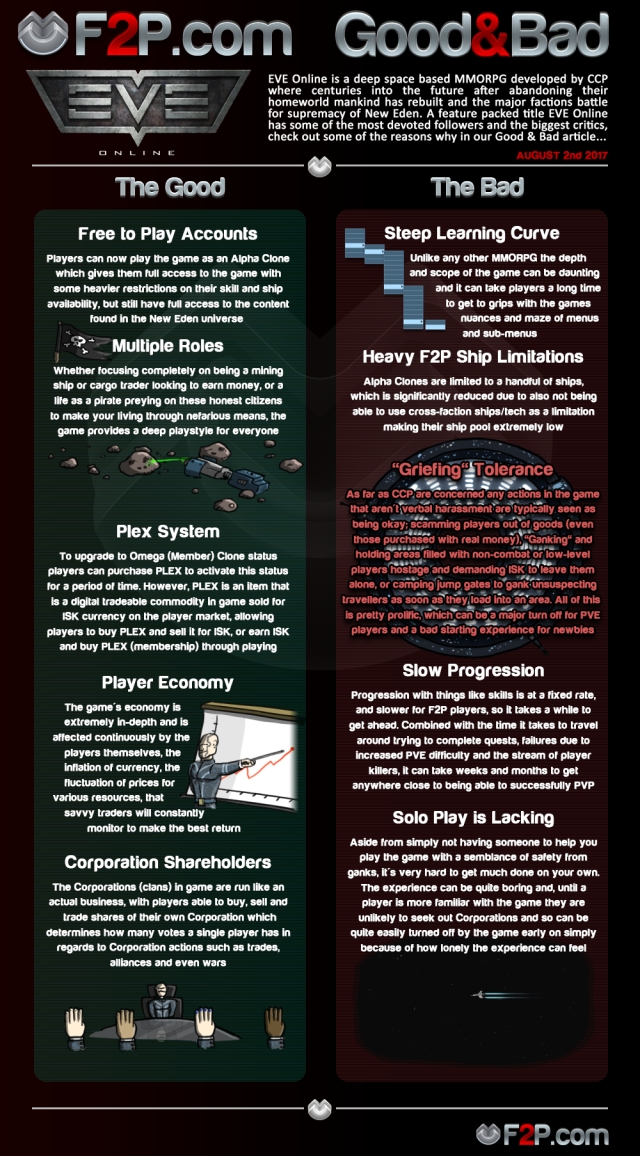