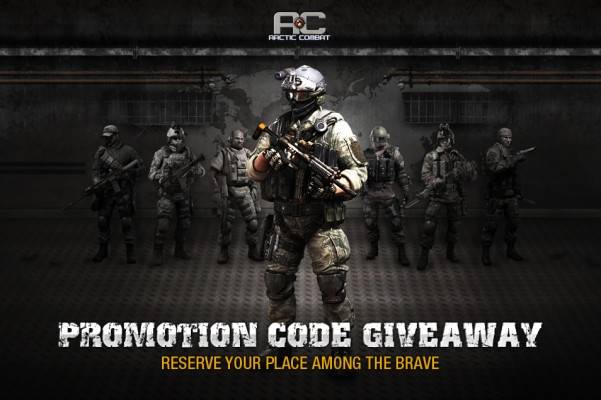 F2p.com, in parterships with Webzen offers you a great promotion for the upcoming MMOFPS Arctic Combat granting you the chance to gain early access to reserve your and your clan name and useful items.

The Open Beta for the gamewill start soon. For this open beta new contents will be added including 2 new maps (Silo and Counter Blow), 1 new game mode (Annihilation). All characters created and items received will continue into the official launch.
Participants who redeem a promotion code will gain early short time access to the game one day before the open beta starts, where they will have the privilege to make their character first and reserve their preferred name to use from the open beta continuing into the official launch. They will also be able to create a clan in advance and reserve a name for that clan. Additionally, players who redeem the code will receive items from the start of official launch.

Step 2. Vist promotion page Here and loginc in to the game, redeem your Promo Code on the event page by entering your code number, then click “Enlist”.

About this game:
AC, WEBZEN’s first military and skill-based first-person shooter, has been in development since 2007. Set during World War III, which is caused by a dispute over natural resources, AC presents high-quality battleground experiences based on Unreal Engine 2.5 with realistic cinematic sounds. It has become one of the most anticipated FPS games in South Korea for its tactical skill development system, high-tech modern weaponry and more.