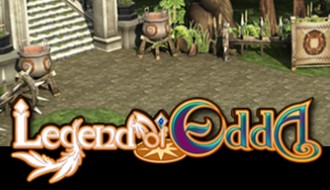 GamesCampus announced today that Legend of Edda will begin its open beta testing phase starting October 14th at 10 AM PST. The open beta test is open to everyone. In the open beta test, players will find more updates and brand-new content to the wildly-popular Sacred Treasure Wars.
Players can expect numerous changes from the closed beta test with the biggest one being an increased level cap to 40. With this new level cap, a vast amount of content will be opened up to players including more skills, weapons, armor and even areas.

Fast-Paced PvP battles, and more importantly RvR, battles are the root of Legend of Edda and the open beta will introduce a new Sacred Treasure Map which will test the player's strategy, skill and most importantly teamwork. By overwhelming demand, Sacred Treasure Wars will occur more frequently and be available to more players with shorter durations and more maps. For the hardcore RvR players, new armor rewards will only be available for purchase with points earned in the Sacred Treasure War and higher level items will be introduced so players can gear characters up for battle.

Players will be able to explore new world areas -and all the dangers that lurk amongst them -including new fearsome monsters, dangerous terrains, new exciting quests and threats from other players. In addition to the new world areas, the open beta will introduce two new dungeons for players between levels 30 to 40 which will allow them to band together and take on difficult challenges along with formidable bosses. To help players conquer these new areas, the equipment upgrading system has been improved to increase the chance of strengthening weapons and armors more simply.

"We want to thank everyone who participated in the closed beta test and now want to open up that experience, along with several new enhancements, to all players," said Uyen Uyen Ton Nu, head of marketing for GamesCampus. "Players are now one step closer to discovering the dynamic mythological fantasy world of Legend of Edda, and we want everyone to come and experience all of the new exciting changes now that are part of the open beta test."